All about the Southwest Power Pool 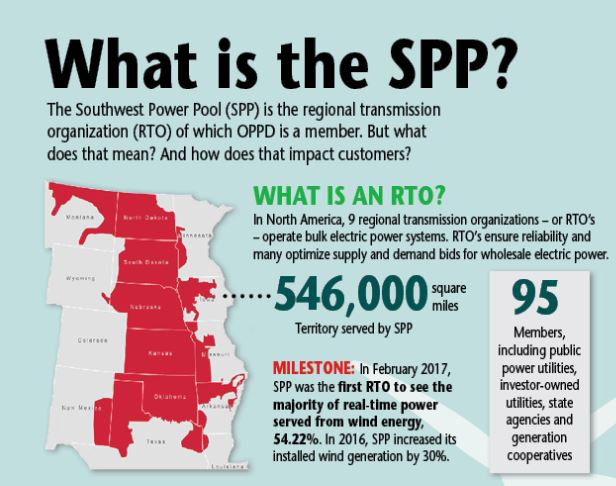 In 2009, OPPD joined the Southwest Power Pool (SPP) and became members of the regional transmission organization (RTO), which spans from Texas to North Dakota and west to Montana.

SPP facilitates grid interconnection and collaboration through its multi-state region for the optimization of grid assets between electric utilities.

Nine RTOs span the United States. SPP, based in Little Rock, Ark., manages the bulk electric grid, operates a wholesale market and plans transmission on behalf of its 95 utilities and transmission companies.

The organization was formed in 1941. At that time, 11 companies pooled resources to guarantee the power flowed, uninterrupted, to Jones Mill near Malvern, Ark. The mill was a critical producer of aluminum in support of the American war effort during World War II.

Lang said SPP manages the power grid around the clock, ensuring the grid’s safety and reliability in the even of outages. In comparison, SPP is much like an air traffic controller.

The wholesale energy market is communicating with all of its power generators at least every four seconds. That allows OPPD and other members to sell their wholesale power to other power pool participants using the Integrated Marketplace. SPP also ensures the availability of economical and reliable energy to consumers.

Through its wholesale electricity market, SPP facilitates the sale and purchase of electricity across its territory. It boasts about $570 million in annual savings to its market participants. Earlier this year, SPP announced its wholesale markets reduced the cost of electricity by more than $3.5 billion since 2020.

SPP reached a milestone in 2017: It became the first RTO to get more than half of its real-time power from wind energy.

To help maintain the health of the grid, SPP works with members to plan transmission projects. An example is the recently completed 180-mile, 345-kilovolt Midwest Transmission Project (MTP).

The MTP line, completed in December 2016, will ease the north-south transmission congestion through an area of Nebraska and Missouri.

A robust transmission system offers its members more continuous, reliable access to power around the SPP region. And non-members can purchase electricity from the RTO, as well. SPP membership allows OPPD to purchase renewable energy from wind facilities located inside the SPP footprint at no wheeling cost if SPP transmission capacity is available.

And for OPPD, membership in SPP helped the utility meet the needs of new commercial customers. In 2017, Facebook announced it would build a data center in Sarpy County. The project is one of the largest investments in the state’s history.

“Through OPPDs membership in SPP and participating in the SPP Integrated Marketplace, OPPD is able to offer Rate 261M to customers taking high voltage transmission service,” Lang said. “This structure gives customers flexibility in how they meet their energy goals, while charging fair and reasonable rates that cover OPPD’s costs.”

SPP ensures customers benefit from lower-cost and more diverse sources of energy, no matter where in the region it may be. Such benefits, along with planning for future generation and transmission needs, are the main attributes of belonging to an RTO, according to Michigan State University’s Kenneth Rose. Rose has more than 20 years of research experience in the structure, economics, and regulation of U.S. electricity markets.

“The primary benefit to an RTO is that it pools resources across a wide area,” Rose said. “With more generation resources to dispatch, this can lower the cost – assuming there are the transmission resources in place to do centralized dispatch across the region. Also, there can be administrative cost saving to having one party responsible for operating the regional system, instead of each utility having their own separate operation.” 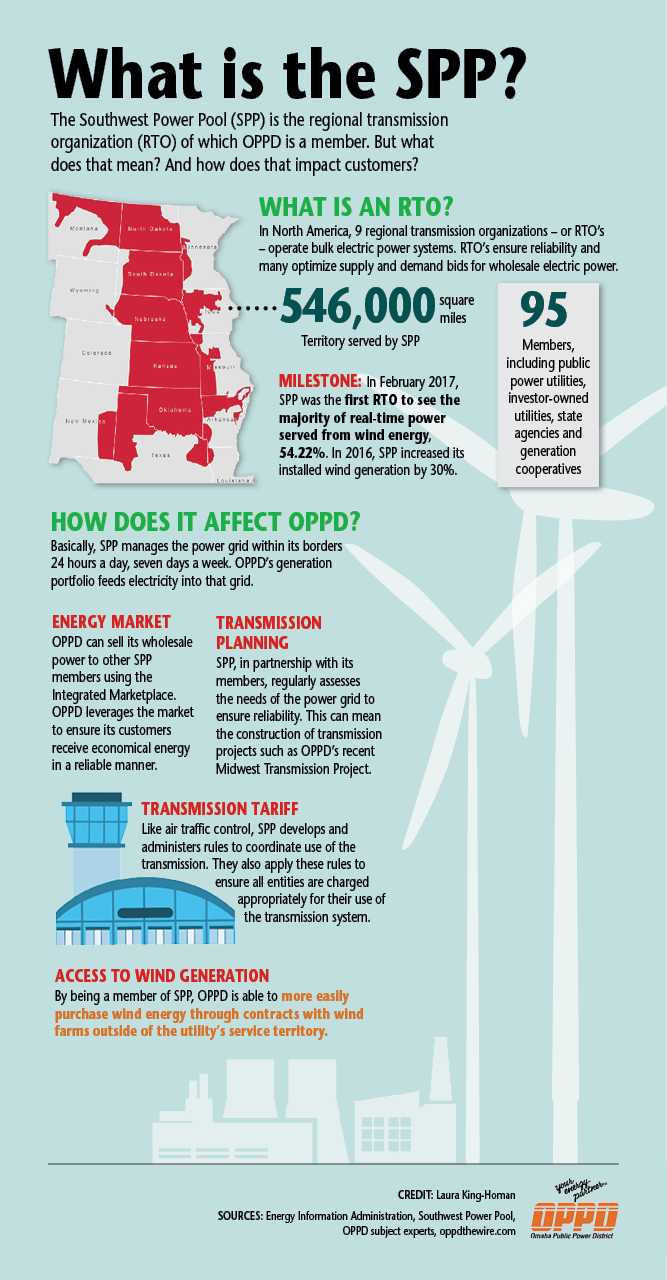 Despite challenges, the district remains committed to its goal of achieving net-zero carbon production by 2050.