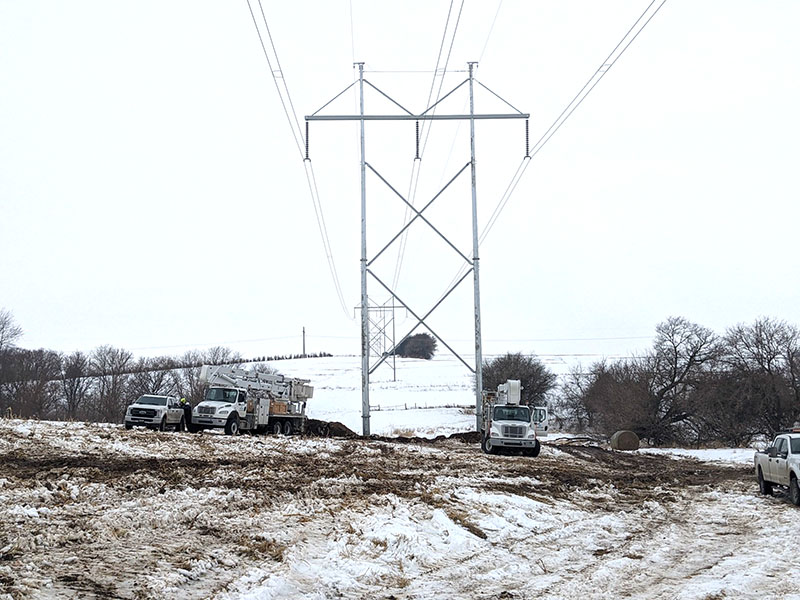 Work is wrapping up on a unique project, the first of its kind at OPPD, and maybe anywhere.

The utility is replacing 16, wooden 345-kilovolt (kV) structures in several rural stretches with a combination of steel and fiberglass. Six of them are part of a line to Lincoln Electric System (LES). It’s all in the name of reliability, said Brian Wahl, senior engineer in Transmission Engineering.

“These are 1970s-era lines,” Wahl said. “We have probably 1,000 of these types of structures. OPPD does regular inspections and usually finds a dozen or more that need replacing.”

The 2017 Father’s Day storm triggered OPPD to look at a different kind of structure after damage to one of the wooden structures south of the Platte River. The damaged structure was very tall, and it would take up to six months to obtain expensive wooden replacement poles. After a widespread storm it gets even harder to find replacements for this type of pole.

“We wanted to try steel poles with fiberglass arms for the damaged structure, but we were tight on time, so we used steel poles and the normal wood arms. But now over three years later we are installing 16 of the new steel/fiberglass structures,” Wahl said. “We also wanted to use steel and fiberglass as we see some rapid degradation of wood structures. Sometime we see degradation from woodpecker holes, ground-line rot and lightning damage in as little as 10 or 15 years.”

Wahl said the structures even catch on fire sometimes and OPPD is hoping to get well over 40 years of reliable service out of the new structures.

He said OPPD will evaluate the new structures – which will be finished in the next few weeks – several times a year. Wahl thought OPPD is one of the first utilities in the nation to use a steel/fiberglass combination in a 345-kV transmission line.

“It can be hard to engineer out wood’s characteristic flaws,” Wahl said. “Steel and fiberglass aren’t as susceptible to all the factors you get with wood.”

He said some of the more common chemical treatments used on wood are being phased out. These treatments make the wood last longer, but can be an environmental concern.

And if the steel and fiberglass trial goes well, it could be an option for routine structure replacements and storm restoration needs, one that better serves OPPD and it’s customer owners.