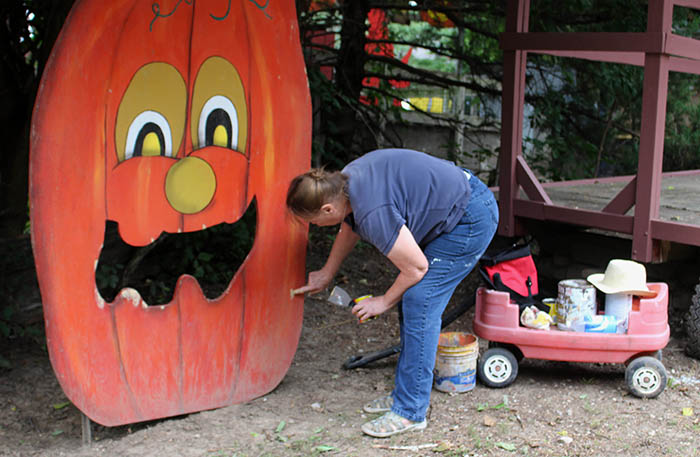 It’s been 35 years since Tim and Jan Vala opened a you-pick strawberry operation on a farmstead near Gretna. That year yielded one pickup load of pumpkins.

Since starting in 1984, the Valas have moved beyond strawberries, grown countless pumpkins and transformed the homestead into a fall festival brimming with activities that draw visitors from all around the area.

And as Vala’s Pumpkin Patch has grown, they’ve worked with Omaha Public Power District to make sure the infrastructure is in place for every new barn, kettle corn stand and haunted house.

The relationship with OPPD started on about the second or third day they were open, when an irrigation well was needed for the strawberry crops, said Tim Vala. Since then, OPPD has added transformers and a three-phase line to service the growing operation. In each instance, Tim Vala contacted electrical service designer Mark Krepela to discuss plans for future additions.

“In the past it was adding load every now and then,” said Krepela. “now they have plans every year for expansion.”

Up until 2013, attractions were added as they went. That year, the Valas planned to add a pie barn. Krepela suggested they start looking at a master plan for the property and where they would add future attractions. This would allow OPPD to plan service more efficiently.

That new strategy resulted in adding a three-phase line to the property to service future load growth.

“We now have a better idea about what their next plans will be,” Krepela said.

In 2016, visitors to Vala’s got a new attraction to visit: A chicken-themed area that includes a three-story, yellow barn with an indoor playground. And chicken-themed concession stands anchor a corner of the property behind the pie barn.

Subsequent years have added apple picking and orchard-related activities for the family. In the summer of 2019, Vala’s moved a barn from Sarpy County onto their property for a future apple-related attraction.

Adding new attractions keeps families coming back and have made Vala’s a part of area families’ fall traditions.

“That’s really powerful,” Tim Vala said. “People want to come out to where they came when they were kids. They love telling their kids they used to do this or that.”

Vala mentioned one plank bench in particular that is special to a family.

“It’s nothing fancy, but for some reason the family started taking a picture on it when the lady was pregnant, and every year they take a picture on that same bench,” he said. “Last year we got a letter that said, ‘Don’t get rid of that bench! If you ever want to get rid of it, we’ll buy it.’”

The sentimentality of some parts of Vala’s adds a new dimension when they begin to plan projects. Both Vala and Gundvaldson said they often consider whether they might be messing up somebody’s tradition, especially when working in older parts of the property.

And visitors love it, too. During its 45- to 47-day season, Vala’s can draw about 15,000 visitors on its busiest days. Vala said they see more than 300,000 visitors during the course of the entire season. That makes the pumpkin patch and fall festival one of the top five non-state park tourist attractions in the state.

Vala doesn’t plan on stopping expansion of the business either. He recently planted about 20 acres of apple orchard trees, which will be a new service that might include a cider barn and apple press.

To help with that growth, Krepela has mapped out the entire property on an iPad so he knows exactly where the infrastructure pieces are and can determine an exact path when adding load.

But no matter how much planning is done, OPPD crews are often onsite doing work just days before the property opens. Last-minute work can include everything from adding an underground line from a switchbox to trenching.

This type of last-minute work is part of the relationship between Vala’s and the utility.

“We work well together because we know their schedule and that every year they are most likely going to need something,” said Krepela. “I expect them to call.”