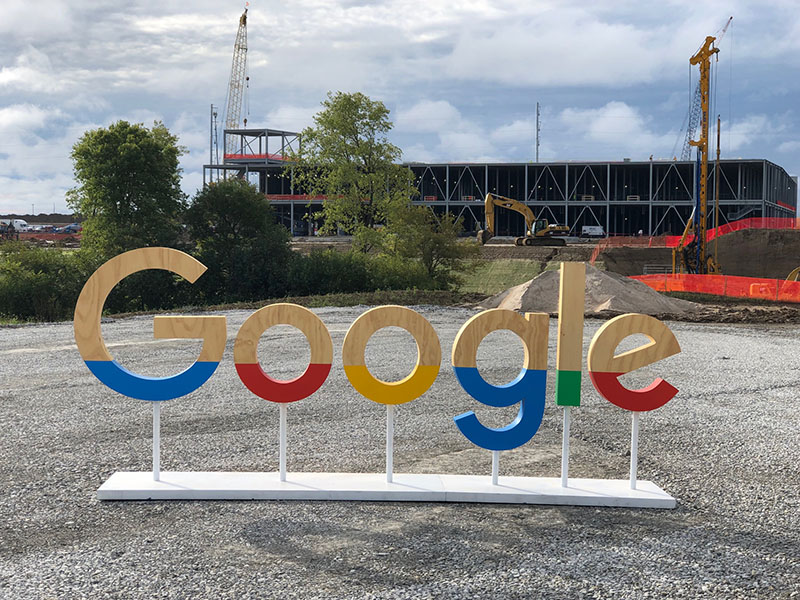 Internet giant Google announced plans to build a new data center just outside of Papillion. Google made the announcement Friday at the project site, which is already under construction and located opposite of the Facebook data center near Nebraska Highway 50.

Google valued their partnership with OPPD as one of the key reasons they chose to invest $600 million in the area.

“We’re thrilled to call Papillion and the Greater Omaha area one of our hometowns,” said Dan Harbeke, Google’s Regional Head of External Affairs. “At Google, our investment isn’t limited to our facilities: we are committed to being good neighbors and creating opportunities for the communities that we call home.”

OPPD President and CEO Tim Burke, the first speaker at the morning event, praised the partnerships he called “instrumental” in bringing Google to the area.

“Today’s event culminates years of work by OPPD employees from all aspects of our business,” said Burke, who is also the incoming chair of the Greater Omaha Chamber. “OPPD is committed to maintaining strong relationships with local and regional economic development organizations to help them grow their communities.”

Burke said OPPD’s innovative rate is recognized around the world as being environmentally responsive and that the utility would continue to be innovative while also keeping rates affordable, power reliable and continuing down the path of environmental sensitivity.

“Our team has been committed to economic development for many, many years,” Burke said. “It wasn’t too long ago that we went to the chamber and began thinking about how do we develop, engineer and identify sites to make sure they have all the infrastructure that is needed. It’s because of that work five or six years ago that we are sitting here at the Highway 50 corridor with all this great growth and development.”

Nebraska Gov. Pete Ricketts also praised OPPD in his remarks to the crowd gathered under a tent on the cool fall day. Ricketts spoke in front of a wooden plaque of the state of Nebraska with the words “Google Papillion, Neb.” on it. The stage had the easily recognizable Google-colored piping and the data center sat prominently behind it.

Ricketts cited low-cost public power as one of the keys to why Google chose Nebraska. He also singled out Burke, the Greater Omaha Chamber and the Sarpy County Development Corporation.

Ricketts said that with all the teamwork it takes to bring a Google to Nebraska, OPPD was a “lynchpin in making this happen.”

He pointed behind him to the transmission lines lining the Highway 50 corridor, the innovative renewable energy rate and the work done to create shovel-ready sites as examples of why Nebraska got this investment.

“It really is leaders like Tim Burke and OPPD that are making these things happen around our state which is why we are getting these types of investments. So Tim, kudos to you and your team. It really is a great day for Nebraska.”

Google built its first data center in Council Bluffs in 2007 and expanded in 2012 and 2015. They’ve invested over $2.5 billion and created over 450 jobs at the locations, along with awarding more than $1.5 million to local schools and nonprofits, according to Google.

Google data centers are part of the physical infrastructure that supports the company’s key tools and resources for internet users, including search results, YouTube videos, Gmail and other apps to billions of users around the world.

As a backdrop to the event, construction equipment busily moved dirt, while the orange vests and hardhats of construction crews could be seen working within the data center.

Since 2017, Google has purchased 100% renewable energy to match consumption for global operations. 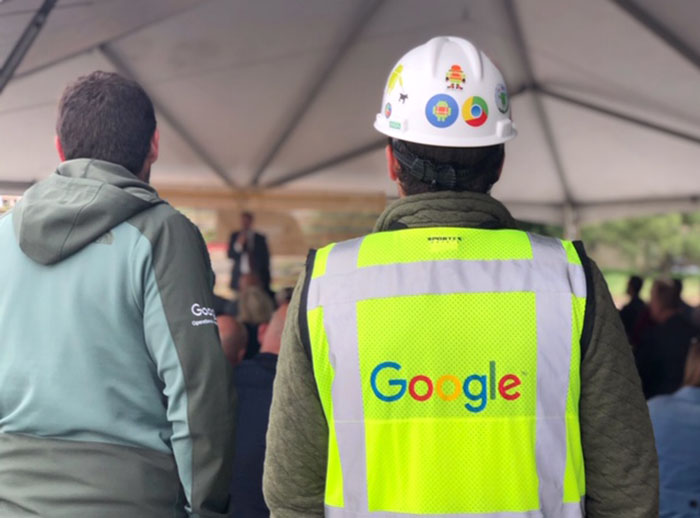 It can’t be overstated how much work went into fitting Google’s plans into an already tight schedule for OPPD personnel. The utility’s system planning and transmission departments turned on its head the old paradigm that a public power utility is slow to adapt.

As soon as it became apparent Google was looking at the Nebraska Highway 50 corridor, OPPD put planning work into overdrive. Questions had to be answered right away, said Dan Lenihan, director of Planning & Strategy.

“We had to look at if we had enough capacity to serve their needs. Do we have proper voltage? Are we going to have a stable delivery of power to them?” Lenihan said. “Our planning division’s electrical engineers were at the forefront of the modeling and analysis we did to determine what we needed to do to connect this large customer into our system, to integrate them in a reliable manner. Josh Verzal and his group (Transmission Planning) did a tremendous job.”

Lenihan’s department works in “lockstep” with the Economic Development department to attract new customers and find the best fit for certain customers.

In 2016, OPPD ramped up its efforts to make sure there were “shovel-ready” tracts of land ripe for development. A large business attraction team formed in 2007. They work with local governments and groups like the Omaha Chamber to bring in new businesses. But the area lost out on several projects due to a lack of controlled sites to develop.

The effort led to companies like Fidelity, Travelers and Facebook locating operations in Sarpy County. One of those sites identified by the team was the Highway 50 corridor outside of Papillion, near Interstate 80. Google sits on 275 acres in the middle of that site.

In order to serve customers in this growing area, OPPD began constructing a new, 6.5-mile transmission line known as the Sarpy Transmission Project (STP). As the Google project and other additional load came into focus, the line was upgraded to accommodate future growth.

Not an easy task. That type of line configuration will be the first of its kind in OPPD’s service territory.

The STP project fast-tracked many projects to accommodate the work, said Dannie Buelt, interim director of Engineering. The result, he said, is a robust backbone of infrastructure in that area that benefits the entire system.

It meant long hours for many T&D personnel.

Buelt said what would typically be a four-year transmission project was done in 18 months. He said the team needed to remain flexible and nimble, while leaving enough room on the schedule for significant changes.

“This was a major change,” said Shane Hanson, lead engineer in Transmission Engineering, “We were at the point where we needed to start reserving the steel poles and figuring what their geometry would be, what weight they could carry, how much load they could carry. Those are things that must be completely developed and analyzed ahead of time.”

And OPPD had a firm deadline to finish the line and have it ready to power the Facebook project: December 2019.

“This is different than anything we had done before,” Hanson said. “It was an exciting twist in our methodology. You don’t think of your old public utility being so nimble and flexible. It’s been cool to see us flex in that way.”

Another challenge, one that OPPD has leveraged into a major strength, is the “public power advantage.” Originally, OPPD looked to attract smaller data centers, focusing on distribution or retail-level connections, Lenihan said.

The new direction meant new substations and transmission lines in the area, upgrades totaling about $100 million.

“The amount of electrical demand being put on the system in our area once it is built out will be the equivalent to adding more than 100,000 households in that corridor,” Lenihan said. “The magnitude is amazing, something OPPD has never seen before.”

Lenihan said OPPD is in competition with utilities across the country to bring in customers of this size. Customers with large, steady loads benefit the overall system, Lenihan said.

“Our ability to respond to these customers’ requests and to accommodate them in a timely manner is what sets us apart,” he said. “Being flexible is of the highest importance.”

For OPPD, partnering with a company like Google brings many opportunities. One of the biggest being making better use of the utility’s existing and future infrastructure.

“That’s not us,” he said. “Recent decisions like the Fort Calhoun Station decommissioning and the refueling of North Omaha Station units 1, 2 and 3 have allowed us to right-size our system.”

Fernandez said data centers are great fits for OPPD because they provide steady, reliable load. They do not significantly peak in the summer when demand is highest. And there are no significant dips in demand, which you might find in other industries. Fernandez gave the example of a manufacturing company that uses relatively high amounts of power during their production cycles, which may not be 24-7.

“We still have to build that infrastructure and support them even though doing so might be less efficient,” Fernandez said.

Companies like Google use energy constantly with little variance, representing a more efficient use of OPPD’s resources.

OPPD officials feel data centers are good customers for the utility. The utility takes a targeted approach to attract them to the area. It’s a big reason these companies chose the area.

The Omaha area’s unemployment rate has been and remains low.

When a new employer comes into the area, Fernandez said, one of the first challenges is finding the necessary and qualified workforce. Nebraska’s unemployment rate is under 3 percent, according to the latest numbers from the U.S. Bureau of Labor.

The area can support the jobs that come with data centers, beyond long-term construction jobs.

“People don’t always understand the types of jobs projects like these create,” said O’Brien. “These are good construction jobs and they last several years, which is attractive to construction companies.”

There are obvious economic benefits for landing large data centers besides the hundreds of construction jobs. They bring extra money into local economies from construction companies and others that support the project. Those workers eat in restaurants, stay in hotels and spend money on construction materials and other expenses.

Internally, working to bring companies like Facebook and Google to the area means a lot of work for all of the utility.

But data centers benefit customers throughout OPPD’s service territory, Fernandez said. Large customers provide OPPD with revenue to put back into the system to help all OPPD customers.

“We are moving towards a more sustainable future by our board’s direction, looking at different technologies to continue to transform this utility,” he said. “That’s expensive. How we continue to transform the utility and pay for those investments is challenging. Attracting new business opportunities like the one with Google helps us plan the modernization and reinvestment we want to see in the system in the long term.”