Senior team leads the way in number of women 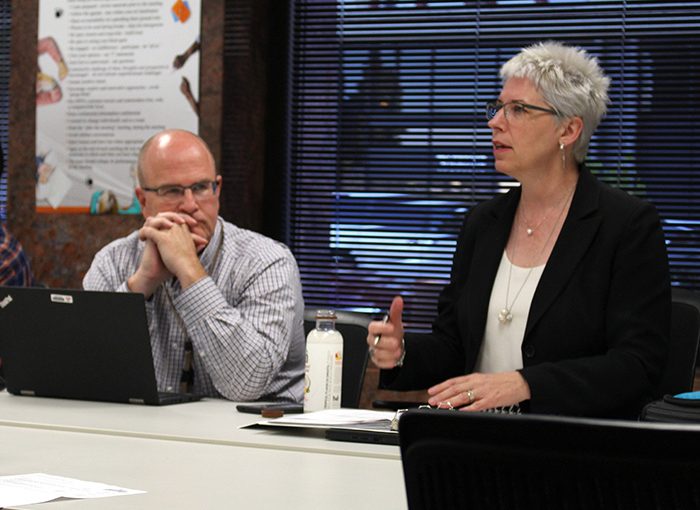 The faces you see around the table at an Omaha Public Power District senior management meeting might look differently than you expect.

The utility is leading the way when it comes to female representation on its senior management team. Five out of the nine members are women.

The team’s make-up is an outcome OPPD President and CEO Tim Burke did not intentionally pursue.

“It’s clear that when you have diversity you make better decisions,” he said. “You have a more rounded perspective. When you have that, you develop things deeper, fuller, better, and therefore your solutions are better.”

He said OPPD seeks to hire the best person for the job with the right talent, skills, background and competencies for the future of the utility. That includes candidates who may not come from a utility background. This allows them to approach OPPD’s operations with a different perspective.

“I wouldn’t say we’re taking over the world, but there’s no question we’re making advances,” she said. “OPPD is in the forefront, but they’re not alone. LES, NPPD also have women in leadership. We’re starting to see that more and more.”

Among Omaha’s largest companies, having a senior management team with women as the majority is rare. 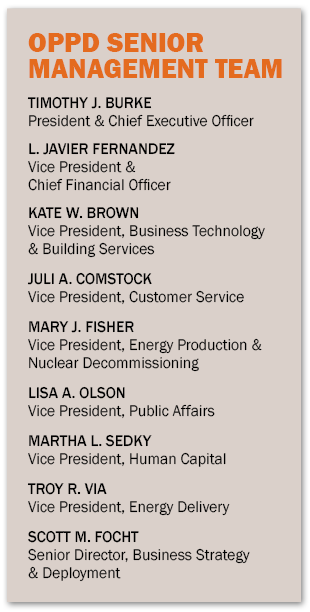 Nationally, women hold almost 52 percent of all professional-level jobs according to the U.S. Bureau of Labor Statistics. And they account for 47 percent of the U.S. labor force. At the highest levels of business leadership, women hold only 26.5 percent of executive and senior-level positions in S&P 500 companies. Their presence in the CEO chair is even rarer, with women accounting for only 4.8 percent of CEOs.

“It helps women to see there are opportunities to rise to the top level of the organization,” she said. “That’s not something you see in a lot of organizations.”

Sedky came to OPPD from another utility. In her experience, the industry has been predominantly male. Having women hold executive positions is “not the norm.”

“Having a different outlook of how our product affects different types of people is important,” he said. “Those diverse people around the table have different perspectives and OPPD makes better decisions as a result.”

Does he think Omaha will see more women in executive roles?

“I think that’s going to evolve. For OPPD, it just appeared to be the right time.”

The utility underwent a strategy shift in recent years referred to as “Business Transformation.” It looked at efficiencies and process improvements to make OPPD a stronger utility for its customers.

Burke said that process means looking at how OPPD can be more reflective of its customers.

Kelly of APPA agreed, pointing to the rapid changes occurring in the industry, including technology, customer choices and new ways to provide service. To deal with these changes, it benefits public power utilities to have a more broad-based perspective.

To increase diversity, companies must also think about the future workforce. Utilities work with students of all ages to spark interest among girls and women in fields traditionally dominated by men, such as engineering.

OPPD sponsors an event that does just that, by allowing girls to discover careers in trades. Utility employees also regularly speak to school students and community groups about their work.

“That’s why we do those events, to get women thinking they can do those careers and get them on the path to making it happen,” Burke said. “We’re walking our talk of leading the way we power the future.”