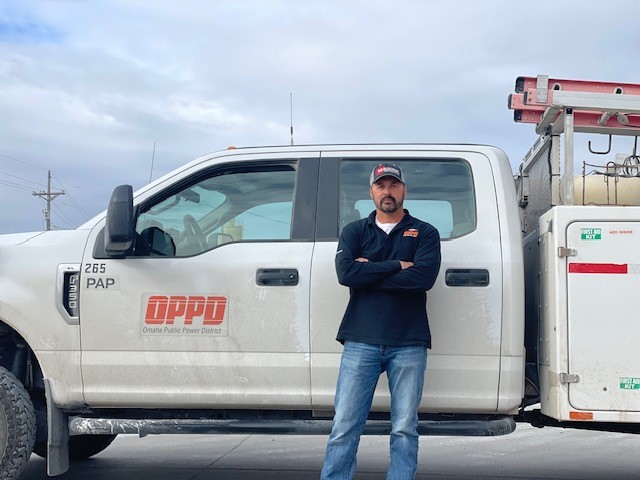 No matter what his title says, Ray Knott will always consider himself a lineman.

For the past 28 years, that’s who Knott’s been and how he has thought of himself. But things change.

Climbing poles isn’t as easy as it once was. The body doesn’t recover as quickly or react as well to long, hard days in extreme weather conditions.

So Knott has begun the second act in his OPPD career, that of an area field supervisor, working out of the Louisville Service Center.

“For me it is a new identify,” said Knott. “I’ve always seen myself as a lineman, and now I’m not a lineman anymore. For the most part, the people doing this (area field supervisors) are doing it for a reason. This transition is one of the hardest parts of becoming a supervisor.”

The new job means less worry for the family. Knott’s wife of 27 years, Carla, won’t have sleepless nights anymore during storms like she did when he was called away.

Knott said OPPD is a big part of his family. His father, Bernard, retired in 2004. He too was a lineman. One of his two sons, Wade, works in the Substation department at OPPD. And the other, Brady, will follow in dad and grandpa’s footsteps – he begins his career at OPPD at the end of the month as an apprentice line technician. A third child, daughter Carsen, is a nursing student in Lincoln.

After graduating from Northeast Community College in Norfolk, Knott worked for NPPD out of Scottsbluff. But he knew he wanted to follow in his father’s footsteps.

Knott cited the benefits, the company’s focus on safety and the people who work at the utility as the best parts of working for OPPD.

“Line guys are a brotherhood, they watch each other’s back,” he said. Working as a lineman “is kind of like the military, it really is a family. You spend more time with these guys than your family.”

But that is changing, and after working nearly three decades as a lineman, Knott now has time for more family activities. He still watches out for others, though. As an area supervisor, he travels around to job sites to see how things are going and if the crews need anything. He keeps track of the crews’ schedules and checks on trouble calls that may have carried over from the overnight, among other duties.

“I couldn’t sit at a desk eight hours a day, so I’m glad to get out of the office and get out and about,” he said.

A passion to serve

Knott is also involved in his community. Up until last year, he was a longtime wrestling coach at Louisville High School. He’s taken on mentoring roles at OPPD and has served on various committees. He also helps run the apprentice boot camp for line techs.

“He has demonstrated a passion to serve through his years in the field,” said Teten. “He is very active in his community and cares for his co-workers, customers and the District as a whole.”

For Knott, his work at OPPD has always been more than just a job.

“There is a tremendous amount of pride in being a lineman,” Knott said. “And I’m proud to be part of a family that has three generations who’ve worked at OPPD. This is a passion, a calling. I’ve always tried to do my best and want to be at my best.”

The duties and work life may have changed for Knott, but that sentiment hasn’t.