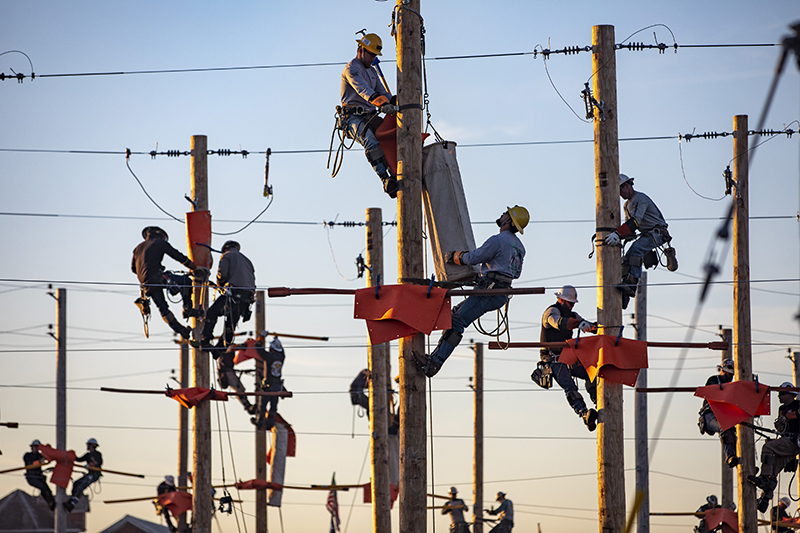 BONNER SPRINGS, Kan. – The rescue took barely two minutes, and the team made it look easy.

With well-honed precision, OPPD linemen Ted Gyhra, Brent Foxhoven and Brent Sass jumped into action. Their mission: save the “hurt man,” a practice dummy dangling from a power pole 25 feet off the ground.

Gyhra and Foxhoven threw on their climbing gear while Sass grabbed a pole with hooks on the end to disconnect a circuit high above their heads. Two judges stood on the sidelines, holding stopwatches and watching for any mistakes that could cost the team points at the 38th International Lineman’s Rodeo.

The annual rodeo in Bonner Springs, Kansas, is a chance for utility line workers to show off their skills, see new industry tools, network and inspire younger generations to join the trade.

This year’s competition attracted 117 utilities from the United States and Canada. OPPD sent six journeymen, two apprentices, four judges and a support team to assist everyone throughout the day.

Dozens of spectators watched as Sass extended the pole up toward the power line to pull a fuse, a required step before Gyhra and Foxhoven could start climbing.

A second later, the circuit popped open. Gyhra raced upward toward the dummy, followed by Foxhoven, both men hauling themselves up with leather belts looped around the pole and boot spikes that dug into the wood. The pole rocked back and forth under their weight.

At the top, they disconnected another wire for safety, wrapped a rescue rope around the dummy’s torso and locked it in place, shouting commands as they went.

Foxhoven sliced through a belt that held the dummy in place. Gyhra grasped the rescue rope, controlling the descent. The dummy dropped quickly but safely to Sass on the ground.

Gyhra, Foxhoven and Sass were one of two three-man journeyman teams for OPPD, competing alongside the two apprentices who participated in separate, individual events.

Some drills weren’t exactly realistic – one required apprentices to descend a pole with an egg in their mouth – but they were designed to test the workers in a high-pressure situation. Apprentices took a written test, and everyone faced “mystery event” challenges that weren’t revealed until shortly before the rodeo started. The hurt man drill emphasized teamwork, communication, precision and speed.

“It’s kind of a blur when you’re doing it,” Foxhoven said.

Richard Terrian, an OPPD apprentice, placed eighth out of 45 competitors in this year’s municipal division. In the hurt man rescue event for journeymen, Gyhra, Foxhoven and Sass finished 27th out of 242 competitors, getting a perfect score and finishing less than 40 seconds behind the first-place team.

The other OPPD participants at this year’s International Lineman’s Rodeo were Trey Mueller, Mike Novotny and Chris Meredith on a journeyman team, and Andrew Walter in the apprentice division.

‘Something that not everybody can do’

O’Neal said the support team played a crucial role in helping OPPD participate, and he thanked everyone for their work. He said the event is a fun opportunity for the line workers and their families who come to cheer for them.

“The rodeo is a way to celebrate their craft,” O’Neal said. “It’s a skill, something that not everybody can do. This is a way to highlight that and to show the pride they have in what they do.”