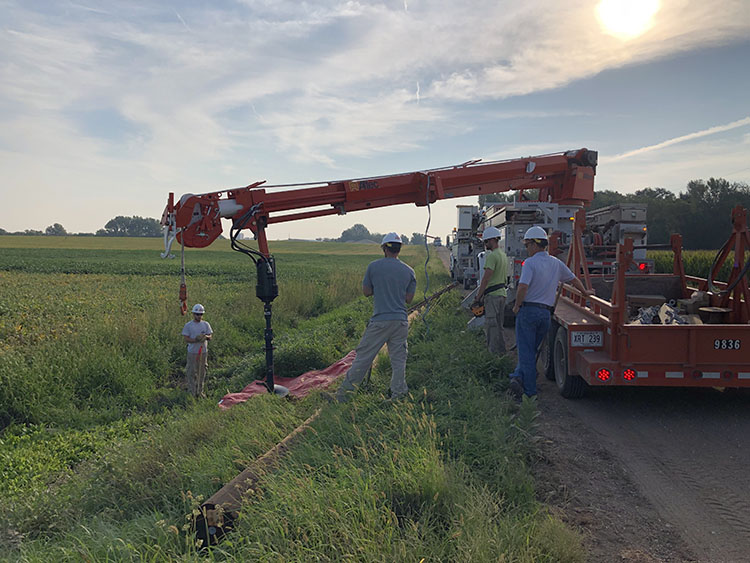 Ten OPPD apprentice line technicians spread out in three crews of three and one crew of four along a county road in Saunders County Monday morning. They eyed the job ahead: building a three-phase line near a nearby agribusiness facility.

It was going to be a busy few days, and a chance for them to demonstrate their skills as part of their apprentice education. All of the line technicians were nearing the end of their first year as apprentices with OPPD.

Working on a job such as this instead of a simulated setting tests the employees decision-making skills and problem-solving abilities. But journeymen and supervisors were never too far away. They were also evaluating the teams work and offering suggestions based on years of experience.

“This event is a great opportunity for the apprentices to experience making decisions on their own normally made by senior line tech,” said Tim Potts, an OPPD transmission and distribution area supervisor.

He added that representatives from the Line Joint Apprenticeship Training Committee (JATC) are onsite to supervise. They also promote safety practices and recognize good work habits as well as point out any improvements that can be made.

Each “crew” first designated a crew leader among them then set to work. First they checked pole position markers, then they set about unloading the 40-foot poles they would set along the road. Once the equipment was stationed at each pole site, they began framing the cross-arms and digging holes for the poles.

The second and third day involved setting poles and ensuring they were ready for the line. Then the crews strung power lines down the line of poles, sagged then secured in place.

OPPD apprentices first complete two years of instruction at an accredited line school, earning an associate’s degree. Once they meet all requirements of the degree, the new potential apprentices must complete a boot camp. OPPD uses the event to select the best apprentices for open positions. Then, once hired by OPPD, they complete an additional four years as an apprentice. Those four years involve tests of knowledge, on-the-job training and hands-on exercises like the Saunders County line.

Once apprentices satisfy all of those requirements over four years, they complete a written and oral exam before becoming journeyman line technicians.