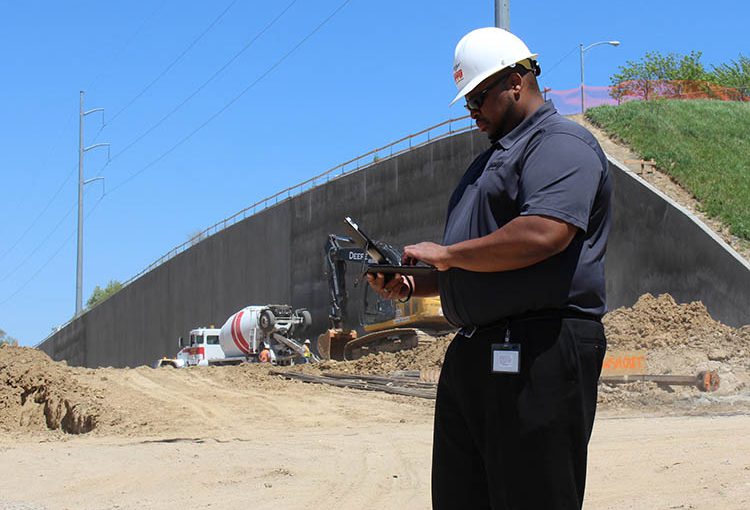 With earth-moving equipment rumbling behind him, Maurice Kimsey, OPPD’s newest account executive, relayed the story of what led him down the electric path.

He was in seventh grade at King Science and Technology Magnet Center working on a 10-step project when he found his calling.

“I had to wire up a mini circuit board to get a light bulb to turn on,” he said. “It sounds goofy, but as soon as I flipped the switch and the light bulb turned on, a light bulb went off in my head. I wanted to know why that works like it did so I went home and talked to my parents about what I did and they said ‘well son, that’s an electrician and that’s a good field to get into.’”

Kimsey said most of his family made their livings with their backs and stressed to him early on the importance of earning his degree so he could work with his mind rather than his back.

“I listened to my parents when they talked to me about electrical engineering,” he said. “I gave it a shot and it’s worked out very well. I’m very humbled and honored to be doing this for OPPD.”

Kimsey has been with OPPD for nine years, starting his career in Transportation and Distribution Operations at the Elkhorn Center after graduating from the University of Nebraska-Lincoln with a degree in electrical engineering. After his third year at OPPD, Kimsey moved to Distribution Planning where he designed circuits and forecasted load before making the move to account executive.

Now he works directly with some of OPPD’s largest customers, including Metropolitan Utilities District, Creighton University and the University of Nebraska Omaha. He took a break to talk about his career and community projects. Behind him, a massive construction wall is going up just off Pacific Street.

Aksarben Village, between Center Street and the university’s campus, is still being transformed. The area hosts restaurants, shops and even outdoor concerts and a farmer’s market along with UNO housing and classrooms. It all started with the Peter Kiewit Institute in the late ‘90s and culminated last fall with the opening of Baxter Arena, home to UNO Maverick hockey and basketball.

Kimsey serves as the go-between for the customer and OPPD. With his background as an engineer, he can help customers figure out their electrical needs.

“It makes a difference,” he said. “When I communicate to our engineers, I’m speaking the same lingo. With my background in engineering, I think I can help mitigate potential issues for our customers.”

But perhaps Kimsey’s biggest asset is his love of people. He’s gregarious and involved in the community. To him, it’s simple: He’s single, has no children, so what else should he do? He works to make his hometown a better place.

He takes pride in playing an indirect role in educating tomorrow’s leaders through OPPD’s projects at UNO and Creighton. But also directly through his involvement with Dream It. Do It, or his role in founding OPPD’s African American Network employee resource group.

For three years, Kimsey has worked with students at Omaha North High School through Partnership 4 Kids. He began working with the four students when they were in seventh grade at Monroe Middle School, the same age Kimsey was when he realized he wanted to become an engineer.

“I tell them the most important thing right now is to get good grades,” he said. “To do your best, know your end game, know your goal. Everything you are doing right now should help you get to that goal. I teach them to not let a test determine your worth. There are things in life that can’t be measured by a test. Your determination, your hard work, working well with others, and communicating with others. That’s stuff you can’t put a GPA on.”

Kimsey hates seeing potential wasted. Seeing others succeed warms his heart. That’s why he spends so much time as a mentor; he wants to bring others up and help them get to where he is.

Student Adonis Ball said Kimsey is easy to be around and has a lot of personality. He said Kimsey has taken them on fun outings like UNO Maverick hockey and basketball games. Ball wants to become a mechanical engineer, or maybe work with cars.

“I look at him like a big brother,” Ball said. “He’s helped me stay on track and keep on task. He’s a cool guy and always wants to help people.”