Community solar facility up and running for OPPD customers 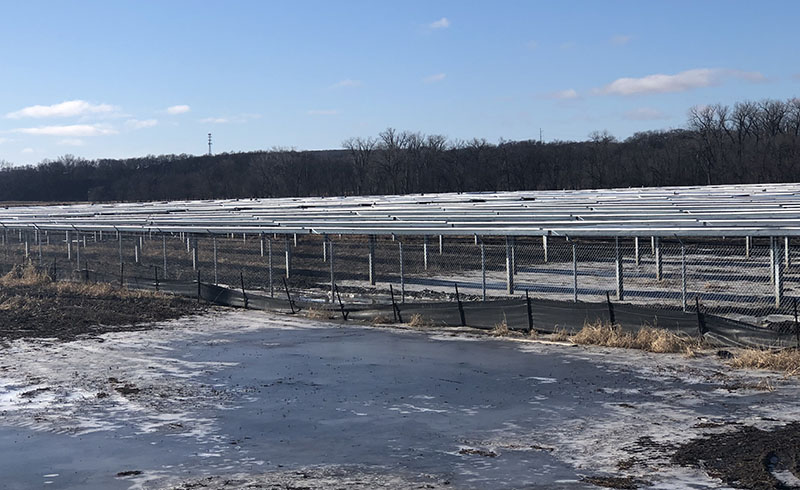 The project was scheduled to go online in June 2019, but historic flooding to the area delayed construction. Due to the area’s high water table, design changes included moving the wiring from a trenching system to an elevated system. Elevated wiring is more common for solar panels, especially in areas that can get lots of moisture.

This design change will allow the facility to continue to operate should the region see flooding in the future.

Courtney Kennedy, manager of OPPD’s Alternative Energy Program, said many people put in a lot of long hours to make sure the solar array was ready.

“The project did not come without its challenges,” Kennedy said. “We had three separate flood events during the construction. We had a number of people who gave up parts of their holiday vacations to make sure the facility was online and ready for our customers by the end of the year.”

Kennedy said there is a great deal of pride for those involved, knowing they provided what customers were asking for.

She said that along with providing participating customers with solar energy, the solar facility is a valuable learning tool for the utility. This project has and will help OPPD better understand solar technology and inform how the utility approaches future utility-scale solar projects, Kennedy said.

The 5-megawatt (MW) solar energy facility sits in a scenic area of Washington County tucked among rolling hills and trees. OPPD and NextEra Energy Resources have a 20-year power purchase agreement for the energy generated at the facility, which has more than 17,500 panels.

Customers can view the facility’s activity in real time on its generation dashboard on oppd.com

The solar facility is the latest generation source for OPPD as the utility moves towards 40% of retail sales supplied by renewable energy. Sholes Wind Energy Center near Wayne, Neb., came online in November 2019.

OPPD also announced its Power with Purpose project in 2019. It features between 400 and 600 MW of future solar generation.

When announced in spring of 2019, the 8,000-plus shares for the community solar program sold out in just 49 days. There is now a waiting list for shares. Each share represents 100 kilowatt-hours (kWh) of electricity. OPPD assesses a monthly solar charge to participants based on the number of shares to which they subscribe.

“It’s exciting to think about the opportunities and the learning that OPPD’s first steps into solar generation present for the utility and our customers,” Kennedy said. “As we continue adding renewables to the mix, we continue doing the right thing for our customers and our region.”