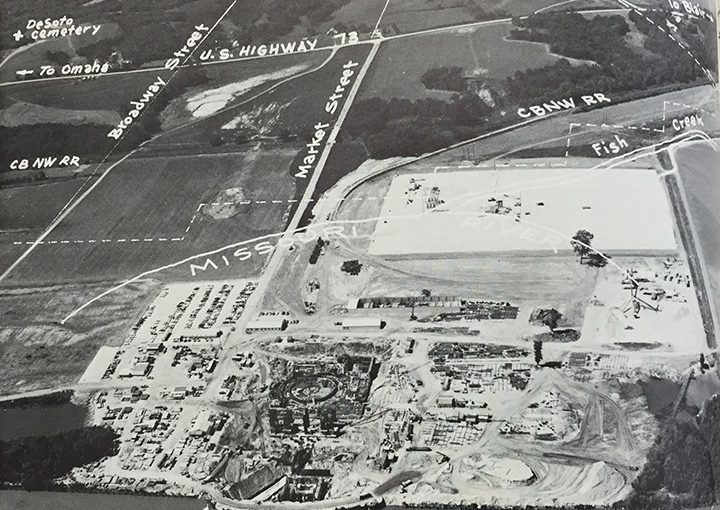 Imagine standing on a rise overlooking an area near the Missouri River in 1804. As far as the eye can see stretches hundreds of acres of lush, green hills and land ripe for planting.

Others have told you that the area is also a good place to hunt and fish.

Imagine your name is Meriwether Lewis. Along with close friend William Clark, you are leading a select group of volunteers across the western portion of the United States. Your goal is to explore this newly acquired, but uncharted, territory. The effort will forever be known as the Lewis and Clark Expedition. As you stand there, you can only imagine the possibilities.

The plant is now undergoing decommissioning, but for more than 40 years, FCS generated electricity to serve the needs of OPPD’s customers.

OPPD built the plant on 204 acres purchased from George and Belva Stanley and William Gustin. The original plan envisioned three generating units at the site, but the utility later scaled back those plans to include the single unit instead.

The historical significance of the plant property goes back much farther than those 40 years.

Located in Washington County, a good part of the site’s history includes the riverfront town of Desoto. That history was explored in-depth in an August 1973 issue of Flash, OPPD’s employee magazine.

As the article explained, prehistoric man and animals first roamed the land 10,000 to 25,000 years ago. Over the years, it would become a crossroads for Native American tribes, fur traders, missionaries, explorers and settlers who frequented the area.

The site would eventually embrace a number of various ventures, including a military garrison, trading post, bustling commercial center, and finally a failed town settlement. Desoto’s demise stemmed from news of gold strikes in Colorado and a railroad that chose to locate elsewhere.

The military garrison was Fort Atkinson, the first U.S. military post west of the Missouri River. Established in 1820, military leaders abandoned the fort in 1827. When the soldiers left, traders, trappers and others remained to ply their trade along the river. Then came the missionaries, more explorers, farmers and those looking for a new start. By 1854, a town had sprung up. A year later the town incorporated as Desoto.

Named after the Spanish explorer, Hernando De Soto, you could say Desoto was a “steam boating” town.  Steam boating on the river was in its heyday, and Desoto provided an excellent landing spot for both passengers and goods. Some intrepid entrepreneurs promoted the town as the “New Gateway to the West.” Population exploded. In three short years, the town grew to an estimated 500-700 people, an impressive figure in those days.

At one time, Desoto was larger and busier than its main neighbor to the south, Omaha. The town hosted a wide variety of flourishing new businesses, facilities and buildings: hotels, saloons, stores, newspapers, banks and even churches and schools. All indications were that Desoto would become the dominant force and major metropolis of eastern Nebraska. However, it was not to be.

The fall of Desoto began when news of gold strikes in Colorado began to circulate. Many town residents decided to up and leave, hoping to find riches in the territories farther west.

However, the final nail in the town’s future hopes came in 1869. Desoto had hoped to convince a new railroad company to build a terminus in their town. With the railroad would come more people, more goods and, of course, more money.

Those dreams went up in smoke when John I. Blair, one of the owners of the railroad’s franchises, convinced the railroad to cross the Missouri River three miles farther north. The location was seen as more advantageous because it offered a natural opening through the bluffs that marked the area.

Blair and the railroad purchased more than a thousand acres of choice land and then offered the land for sale at public auction. In reality, it was Blair who purchased the entire tracts belonging to the original settlers, and it was he who sold the lots for a tidy profit. The town that sprang up around the railroad was Blair, named in John I. Blair’s honor. The future of the new town was assured, while Desoto’s future fell.

There is little evidence remaining that Desoto once sat on the FCS site. While Desoto faded into the pages of history, Blair continues as an intrinsic part of Washington County. While all eyes are currently on the future of FCS, it is worth remembering the land’s deep roots in the past.