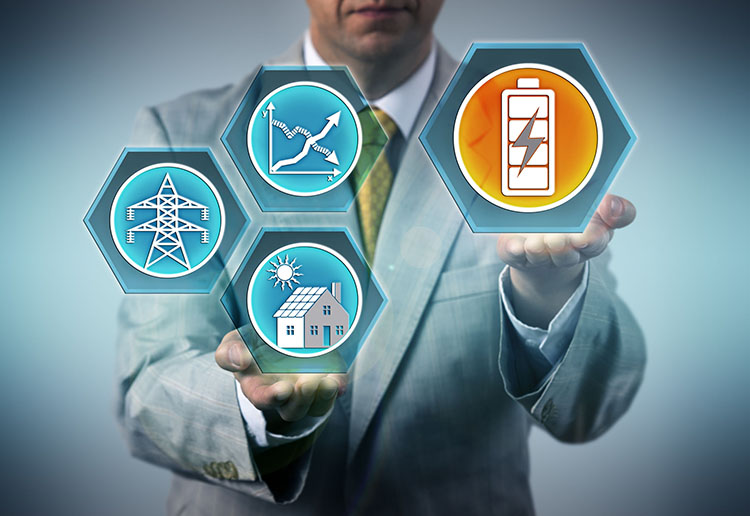 Editor’s note: Energy storage is a hot topic in the utility industry. Over the next weeks and months
we will dive deeper into the topic to give customers a complete picture of the technology.
Part 2: Emerging technologies could offer solutions for energy storage.
Read more in Part 1: The basics of energy storage

How often do you get a new cell phone? The technology evolves quickly. The same is true with the technology used to store the electricity that powers those phones and a zillion other things, especially storage of intermittent wind and solar generation.

With more and more businesses and utilities looking to reduce their carbon footprint and increase renewables, there’s been a major push to improve the technology to harness electricity. That way it can be used when the sun isn’t shining and the wind isn’t blowing.

Omaha Public Power District continues to add renewables to its retail sales portfolio, with wind energy currently accounting for most of it. The utility’s renewables are expected to reach 40% by the end of 2019.

“With the addition of more renewables, we must also provide secure, reliable electricity for our customers,” said OPPD Alternative Energy Specialist Mike Lisowyj. “By storing the energy generated from solar and wind power in reliable batteries, we could ensure our power supply is available 24/7.”

However, there are geologic and environmental constraints on where the technology can be deployed.

“It’s not an option for us in this part of the country,” Lisowyj said. “This type of storage is normally found in mountainous regions.”

“Two big reasons OPPD has not yet adopted this technology,” Lisowyj said, “are cost and safety.”

Li-ion technology is susceptible to catching fire. It doesn’t happen often, but it does happen enough to raise concern. Most recently, a fire broke out at a facility in Arizona April 19, 2019. Eight firefighters and one police officer were injured in the blaze.

The National Fire Protection Association recently released a new guide for first responders – NFPA 855, Standard for the Installation of Stationary Energy Storage Systems. And they now have specialized training in place for first responders due to the possible dangers – from battery explosion and reignition to contact with hazardous materials.

“We want to make sure we’re learning from previous issues,” Lisowyj said, “so that when we do make the jump, we do so safely.”

The technology is promising, though. It’s been the go-to choice for energy storage in the U.S. due to efficiency, performance and relatively lower cost, in comparison to other technologies. And the United States leads the world in Li-ion storage deployment, mostly due to utility-scale storage systems.

“The bulk of that capacity has been installed within the last three years,” Lisowyj said. “As costs begin to decline, more utilities are turning to storage as a viable option.”

According to research company Bloomberg NEF, Li-ion battery prices decreased 85% between 2010 and 2018, and they continue to drop. Bloomberg’s Energy Storage Outlook 2019, which published July 31, 2019, predicts that by 2030 the per-kilowatt-hour cost of Li-ion technology will be half what it is today.

Flow battery storage is another type of technology currently available. It is one Lisowyj believes holds a lot of promise as a Li-ion alternative. They work by storing electrical charge in tanks of liquid electrolyte, which is pumped through electrodes. That process extracts the electrons, and the spent electrolyte goes back into the tank. 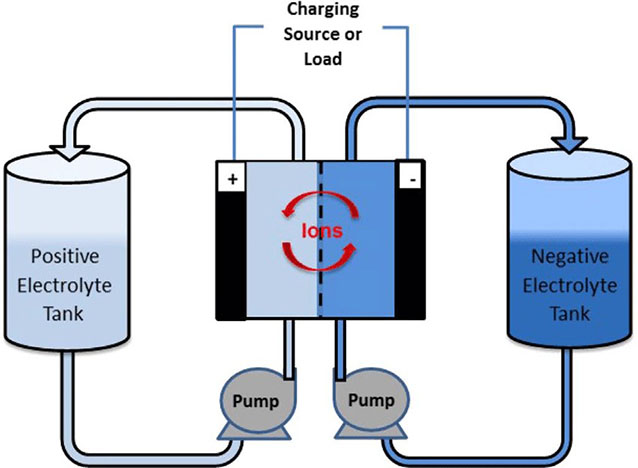 “Vanadium has become a popular electrolyte component because the metal charges and discharges reliably for thousands of cycles.”

To charge the battery, pumps push spent electrolytes back through the electrodes. This recharges the electrolyte and returns it to the holding tank.

“One benefit of this type of battery storage is that it’s easily scalable,” Lisowyj said. “If you need more storage, you can install bigger tanks of electrolytes.”

However, a downside is cost. The price of vanadium has risen in recent years, and it’s expected to continue to increase even more with demand.

“A leading alternative replaces vanadium with organic compounds that also grab and release electrons,” Lisowyj said. “It’s too early to say which flow battery chemistry will support the renewable grid of the future. But the outlook on flow batteries is very positive.”

Another emerging technology sounds like it came out of a science fiction novel – cryogenic energy storage (CES). It uses liquid air as its storage medium. Ambient air is converted to liquid when it’s cooled to below -300 degrees Fahrenheit. 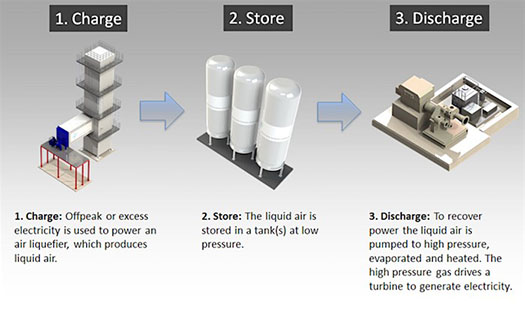 “CES offers long-duration storage,” Lisowyj said. “And it has the potential to mitigate many of the constraints we have with other systems.”

So, how does it work?

As air is cooled into liquid form, it compresses around 800 times in volume. The liquid air is then stored in large insulated tanks. When energy is needed, the liquid air is heated, which makes it rapidly expand through a standard expansion turbine. The turbine is connected to a generator to generate electricity, releasing the stored energy.

“There is no combustion,” Lisowyj explained. “The only thing released into the atmosphere is clean air.”

CES not as efficient as other storage technologies. However, it’s able to charge and discharge repeatedly without losing capacity, which is a plus.

Swiss start-up company Energy Vault has pioneered a completely new kind of storage — gravity-based tower energy storage. It combines basic physics principles and kinetic energy with an advanced software platform to operate a six-arm crane. The crane lifts 5,000 concrete blocks up and down the height of a 33-story building.

The movement of these massive blocks, which weigh 25 tons in total,  provide the basis for the efficient storage and discharge of electricity. When the system is charging, it takes energy from the grid to lift the bricks and strategically stack them. When energy is needed, the bricks are picked up, again, and allowed to fall. The fall turns a generator to produce electricity and deliver energy back to the grid.  The whole process is automated through a software platform for maximum efficiency.

“This concept is very similar to pumped hydro, as it uses gravity to produce energy,” Lisowyj said. “But unlike pumped hydro, there are no geographic constraints. This system can be installed virtually anywhere.”

Other positives include the ramp time, which is the time it takes for a plant’s power output to ramp up or down. Energy Vault’s system takes just a millisecond to ramp up, achieving full power in just three seconds. It’s also extremely efficient, and the stored energy does not degrade over time.

As the need for storage grows, more technology is in the works, which may reach full-scale development in the near future.

Earlier this year, OPPD applied for grant funding from the Nebraska Environmental Trust to install a standalone small scale energy storage project at the substation level. If accepted, this project will help OPPD test how energy storage will integrate with its system to provide load relief and voltage support.

“We plan to leave the project open to any technology that meets our requirements,” Lisowyj said. “This small scale energy storage project would provide valuable experience for future energy storage.”

Increasing penetration of renewable energy sources will continue to drive the development of new storage technologies.

“The key to more storage on the grid is increased storage duration at a low cost,” Lisowyj said.

For now, inexpensive Li-ion solutions remain the go-to for shorter duration storage, anywhere from seconds up to 8 hours, he said. But to solve grid issues like resiliency, the technology must be able to store energy longer, for days or even weeks.