Spend a day on the job with an OPPD transmission crew 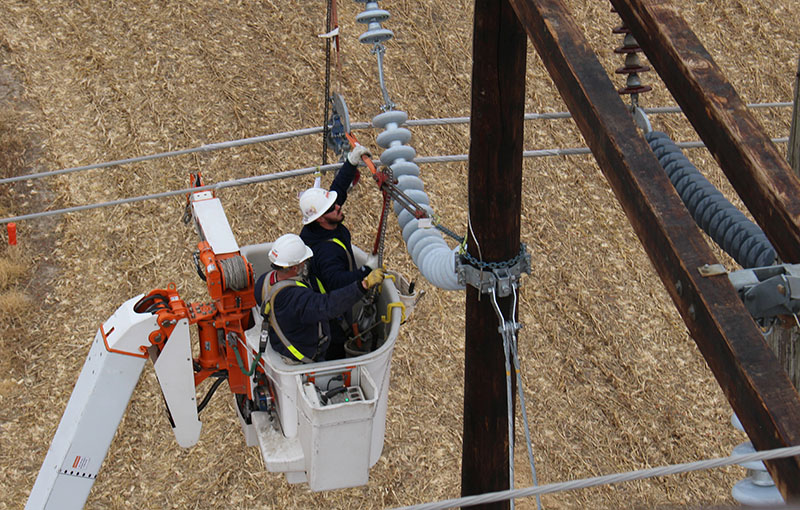 Working on a transmission crew isn’t for everyone.

Some think they’ll love it. But once they are 100-plus feet up in the air, with the cold and howling wind, they find it’s not all it’s cracked up to be.

Spend some time with a transmission crew, witness what they do and it quickly becomes clear they enjoy the job. For one, they get to use the utility’s biggest equipment. On this day, a few miles west of Nebraska City, a crew of 10 worked from both a standard bucket truck and the “condor truck” – OPPD’s highest-reaching bucket truck.

The condor can reach 170 feet, or approximately 15 stories, into the air from the platform of the truck. It can also stretch 72 feet outward from the side. Crews use it to reach the highest and hardest-to-reach areas.

OPPD typically uses the condor and other equipment, like its new crane, in transmission projects. This project in rural Otoe County involved replacing a transmission structure near the end of its life cycle and then damaged by a storm.

The crews worked on the project over the course of several days. The first day was a late-fall gem, where coats gave way to short-sleeves under clear blue skies. By the last day of the job, the skies had turned gray, the wind had picked up and the threat of rain and snow were in the air. The weather had returned to normal for November in Nebraska, signaling snow would soon blanket the fields dotted with the broken cornstalks.

Up in the condor’s bucket, the wind blew much harder. Journeyman line technician Jeremy Hofmeister, recently hired by OPPD, was up in the condor with Hector Cardenas, an apprentice line technician. Both were perfectly content towering 120 feet over the farm ground, transferring equipment from the old structure to the new.

A job like this transmission structure replacement was months in the making, said Brandon Parmer, field supervisor with Transmission & Distribution.

A June, 2017 storm damaged the structures on either side of the one they replaced. Some temporary fixes were made to the middle pole, Parmer said. For reliability’s sake, personnel in Transmission Engineering determined it needed to be replaced before potential weight from winter ice added load to the structure.

Parmer said the Transmission System Operations department coordinated the outage on the 345-kilovolt (kV) line with the Southwest Power Pool (SPP). SPP’s integrated marketplace allows member utilities to sell wholesale power to other SPP members. After meeting its own customers’ demands, OPPD can sell to members any excess power that is generated.

After that was done, operators lined up to haul the large-scale poles and equipment to the site. The site, a cornfield, had to be harvested before crews could work and trucks could access the structures.

At the beginning of the week, an operator brought out the condor truck. Parmer said the transmission crews love working with the vehicle.

“This was one of the bigger types of projects that we work on,” said Parmer, a former lineman that worked much of his career in Transmission. That experience now helps him in his role as supervisor in terms of anticipating what the crews need for the job and dealing with the other areas of OPPD that his group assists.

“Some of the other jobs are more mundane, like replacing a shield wire bell on top of a structure. It’s a job that needs to be done, but setting up the truck to get up there takes longer than the actual replacement.”

For this replacement job, the crew spent a week in a Nebraska City motel since they were so far from their base at OPPD’s Omaha Service Center. Parmer said staying near the site allowed them to start work early and work as late as daylight allowed.

Parmer said the majority of transmission structures are located in inaccessible areas, like open farmland, over hills and spanning rivers. Since transmission lines are vital to OPPD’s electrical system – and the national power grid – they must complete maintenance work in cold months. This allows the lines to remain undisturbed during the summer peak, when those lines carry larger amounts of power across the country.

That means working during cold and windy days, like they encountered on the structure replacement job. Transmission structure materials are also typically heavier, the trucks are bigger the height of the lines greater, which means it takes a special breed to do transmission work.

A “type A personality,” Parmer said.

“That’s what the majority of the linemen who enjoy and volunteer for this type of work are. There is a certain pride in doing this type of work. But it’s vital work that keeps the bulk electric system reliable.”

Dave Green, working line crew leader on the project, said he won’t forget his first time in the bucket.

“Climbing poles didn’t bother me at all,” he said. “You can see the pole in front of you and hold on to it. Being up in the bucket can be different. Some guys find they aren’t cut out for it.”

Another one Green won’t forget was the time he climbed a 400-plus-foot structure in Memphis. He made sure to bring a disposable camera. He didn’t know if he’d ever climb that high again.

By the end of the week-long replacement project, the crew finished the structure replacement and re-energized the line.

Next week there would be more projects and more heights to scale. 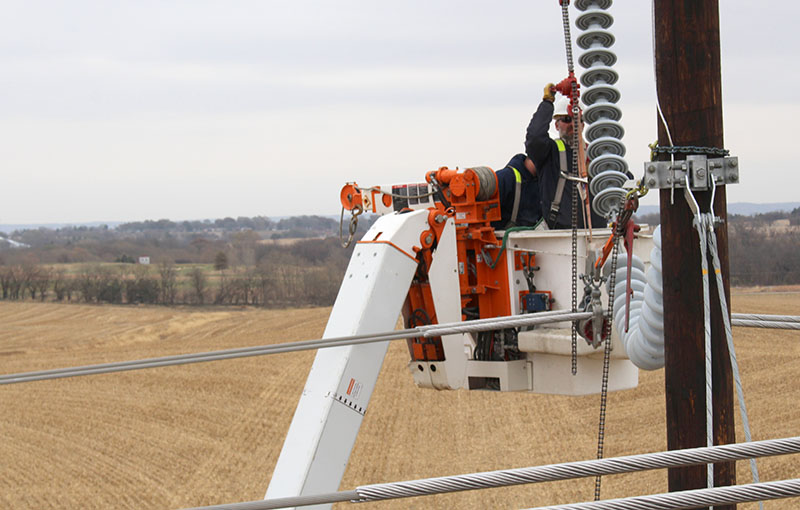