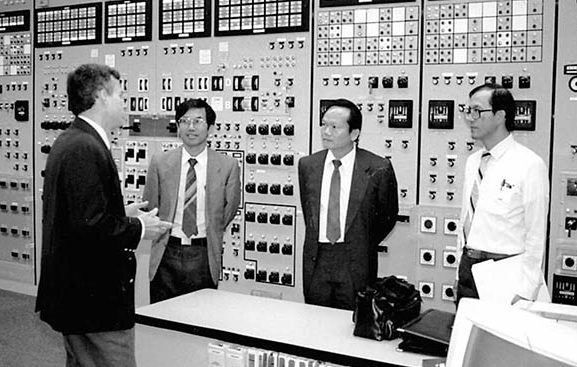 The tragic accident at the Chernobyl nuclear power plant in Russia in 1986 was both an end and a beginning for the nuclear industry.

For the world’s nuclear operators, it ended any illusions that they could work solely within the confines of their companies or countries. Chernobyl made it clear that an event at one plant impacted every plant and that nuclear safety was everyone’s business.

That’s why the World Association of Nuclear Operators (WANO) formed in 1989.

If one power plant doesn’t perform well, the whole industry feels the effect.

Then-OPPD President Fred Petersen attended the inaugural WANO meeting in the Soviet Union in May of that year. There, he joined senior nuclear power plant executives from around the world in approving and signing a charter formally inaugurating the world group. Every country that used nuclear energy to generate electricity was represented.

“It’s a strong indication that excellence in nuclear power operations is now considered a matter of world-wide significance,” Petersen said in a 1989 issue of Nuclear Notes, an OPPD publication created in January 1989 to cover Fort Calhoun Station and industry-related news.

An exchange visit program that enabled nuclear plant operators to broaden their scope of expertise was among WANO’s initial objectives. Over the years, FCS became the destination for many foreign visitors. Following is a sampling from the early years of the program.

FCS hosted visitors from the Soviet Union for the first time in its 18-year history in September 1991.

During the tour, Kontsevoy commented on the diligence of plant employees and how they take pride in their work. He was impressed with the training center, noting that he has never seen a plant that could provide as extensive training as the FCS facility.

Kontsevoy also was studying INPO’s plant evaluation process to see about starting a similar system in the Soviet Union.

Jin-Liang Liou, engineering supervisor – instrumentation & control, and H.H. Teng, shift supervisor at Chin-Shan Station, were in the U.S. as part of a four-week information gathering trip.

At FCS, the visitors met with Claudio Huang, supervisor in the area of human performance enhancement and root cause analysis.

“We’ve worked very hard to make improvements in the area of human performance at Fort Calhoun Station,” said Huang in a July 10, 1992, Nuclear Notes. “We’re flattered that others in the industry feel we have something that will benefit them, and we’re happy to share it with them.”

The major components and the reactor were the same, but that’s where the similarities ended between FCS and Khmelnitsky Nuclear Power Plant (KKNPP). That’s what Victor Sapronov, KKNPP plant director, said during a 1994 visit.

Sapronov and six others from the Ukrainian plant visited FCS for 10 days as part of the WANO exchange program. The primary purpose of the trip was to exchange technical information.

According to Karen Belek, supervisor of industry affairs, the Ukrainian visitors saw every aspect of plant operations. They also participated in several technical discussions with plant management.

“The quality of the people seem very high,” Sapronov said in a Nov. 18, 1994, Nuclear Notes. “I was especially impressed by the open lines of communication. All of our questions were answered to the fullest extent.”

KKPPN was one of five nuclear power plants in the Ukraine at the time. Built in 1987, it was the newest and smallest plant there, with a 4,000-megawatt capacity. Although similarly equipped, Sapronov explained through an interpreter how different the two plants were.

At the time, Sapronov explained: “Because of the tradition in the Soviet Union, the nuclear industry in the Ukraine is a state sector. That means that the people who work at the plant are providing a service for the state.”

He said the town of Neteshin was built primarily to support the plant. There were 5,500 KKPPN employees, but it only took 1,200 to run the facility. The rest worked in different areas of the town, like at the hotel or local swimming pool.

Not only did the plant govern the town, it also provided the town hot water and heat. So when the plant went down for refueling, the town went without those luxuries.

This delegation toured maintenance, operations, simulator and other plant areas, as well as Corporate Communications to see how they handled public relations.