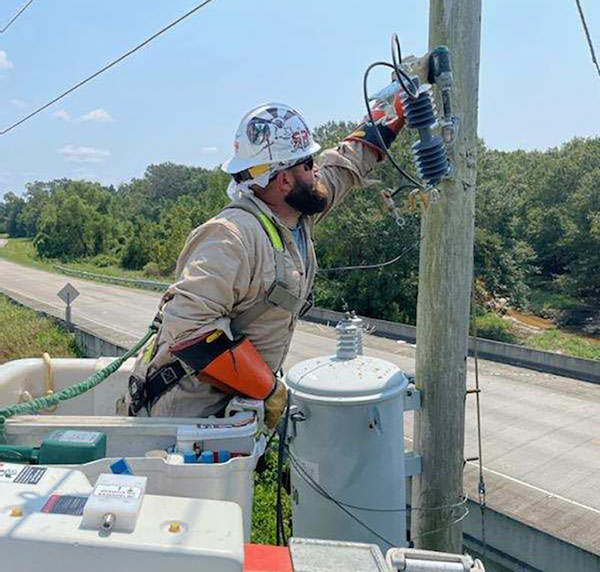 OPPD crews are leaving the Baton Rouge area today after finishing their restoration work in that area. The crews’ total time away will have been 12 days by the time they return home on Friday.

OPPD crews arrived in Baton Rouge Tuesday night and spent Wednesday going through onboarding training with Entergy in preparation for their restoration work. They will begin that work Thursday.

An OPPD contingent is joining public power utilities from nine states that is deploying to Louisiana to assist with power restoration after Hurricane Ida slammed the area Sunday. The Category 4 hurricane – believed to be one of the strongest storms to ever hit the U.S. mainland – has left more than 1 million customers in Louisiana and Mississippi without power.

More than 65 public power crews are currently heading to the area. OPPD sent 15 employees and will work on restoration in Baton Rouge. Crews are expected to be deployed for a week, if not longer. The OPPD crews consist of four, three-person line crews, two transportation mechanics and one field supervisor.

The OPPD employees left a Nebraska City staging area at noon Monday after holding a safety briefing and reviewing their plans. They are expected to arrive in Baton Rouge on Tuesday night and will work with Entergy Louisiana.

OPPD crews were ready to deploy and help out in what will surely be trying conditions.

“Our linemen are happy for the opportunity to help another community, given the level of support we have received from other utilities this year in our service territory,” said Eli Schiessler, OPPD Papillion Center manager, who is overseeing the effort.

OPPD has received mutual aid from other utilities over the years. The most recent example is the July 10, 2021, storm that left more than 188,000 OPPD customers without power at its peak.

The utility has been involved in similar efforts after high-profile hurricanes, including Katrina – which devastated New Orleans exactly 16 years prior to the day that Ida struck. Crews also assisted with restoration after hurricane Sandy, which hit the East Coast in 2012, and Irma, which hit Florida in 2017.

Hurricane Sandy is credited for changing the way mutual aid works among utilities. That hurricane left millions in 21 states without power and led the way for the industry to create a national response plan rather than just relying on a regional plan.

That plan is evident by the number of crews heading to the Gulf Coast area now. The following states are all sending public power crews:

OPPD personnel will not only deal with extensive damage, they will have less-than-ideal weather as well. Forecasts call for more oppressive temperatures in the area, with heat indices of 105 and 106 degrees.

Ida’s winds reached 150 mph, tying it for the fifth-strongest hurricane ever to hit the mainland, according to information from the Associated Press. Entergy estimates more than 2,000 miles of transmission lines were damages, along with 216 substations.