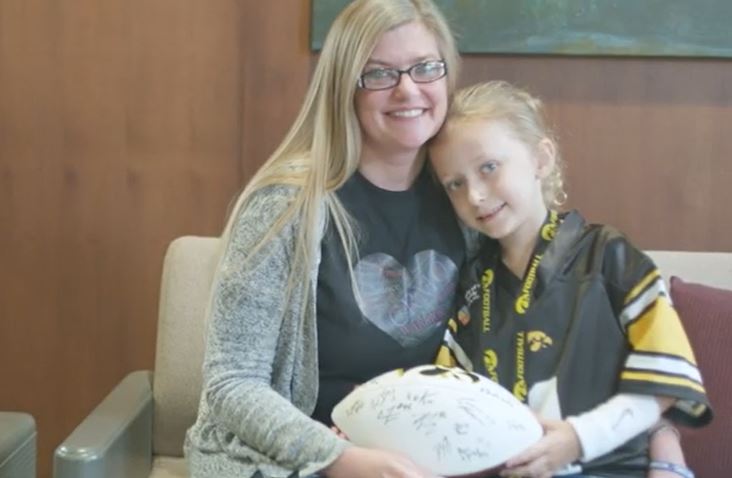 Charlotte Keller is just seven years old. Tiny in stature, but mighty in strength. For more than half of her life, she’s battled severe and debilitating bone pain.

“She was three when the pain started,” said Charlotte’s mother, Robin Keller, an accounting analyst for Omaha Public Power District.

At first, doctors couldn’t figure out what was causing Charlotte so much pain. After several months of testing and various specialists, they arrived at a diagnosis.

“Charlotte has two very rare genetic disorders. The first is a one in a million diagnosis. It’s called chronic recurrent multifocal osteomyelitis (CRMO). The second is Ehlers-Danlos syndrome. It is more common. But still fewer than 200,000 cases a year.”

Charlotte’s symptoms vary day to day. She may run a fever, but be okay otherwise. Or, she may hurt so badly that her mother cannot even touch her to comfort her. She ranks her pain on a scale from bugs to lobsters, with lobsters being the worst.

“It feels like lobsters are pinching you,” Charlotte said. “And it’s inside my bones.”

There is no cure for CRMO. But Robin says there’s hope it will go into remission. Meantime, Charlotte goes to the University of Iowa Stead Family Children’s Hospital for regular infusion treatments, in addition to physical and occupational therapy.

The hospital has a partnership with the University of Iowa Hawkeyes to honor pediatric patients and share their stories of inspiration. Of children nominated, 13 were selected this year to serve as Kid Captains. And Charlotte is one of them.

As Kid Captains, they get a Hawkeyes jersey, an autographed football and a special behind-the-scenes tour of Kinnick Stadium. And they each get to attend one home game.

However, as a lifelong Nebraskan, Charlotte received a special invitation. She will get to serve as an “away” game Kid Captain when Iowa plays Nebraska at Memorial Stadium the day after Thanksgiving.

“Her being able to be there truly is a blessing in itself. We’re very honored they allowed us to be part of that game,” Robin said.

Within the gigantic sea of red, Charlotte will be cheering for black and gold.

“Herky (the Hawk) is my favorite part,” she said with a grin. She got to meet the legendary mascot during an infusion treatment at the hospital. He visited her room and even got her to come out in the hallway to dance.

With the fun comes something more important, Robin said. She’s hoping to raise awareness among others out there who may be coping with the same conditions.

“It feels good to be a warrior,” Charlotte said, her game face on.