Apprentice lineman is hooked on the rodeo 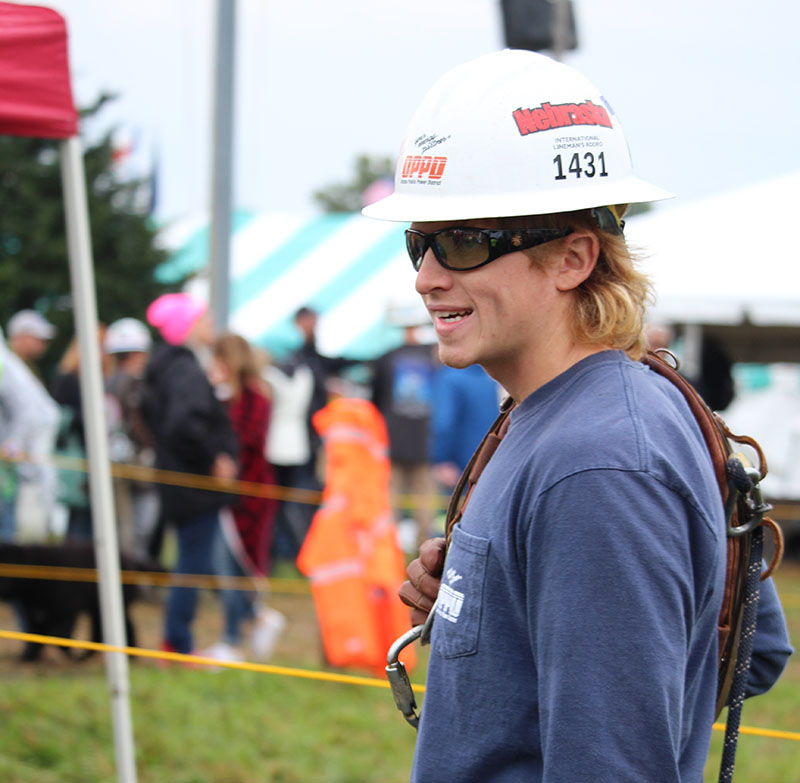 Ted Gyhra was a sophomore in high school when he watched his cousin compete in the Nebraska State Lineworker Rodeo. That’s all it took. He knew then and there he’d found what he wanted to do with his life.

“Watching all those guys at the rodeo that day really caught my eye,” said Gyhra, now two years into his career at OPPD. “Just seeing how they worked together and how they completed their tasks. I found that really intriguing. That’s why I’m so involved in rodeos.”

Gyhra has made a name for himself in lineman rodeo competition. This fall, at the 36th annual International Lineman’s Rodeo in Kansas City, he brought home two first-place finishes. Gyhra won the speed climb and the hurt man rescue. At the Nebraska rodeo in August, he took home three first-place finishes.

The lineman rodeo consists of four skill events and a written test for apprentices. A total of 321 apprentices and 248 three-man journeyman teams competed for 1,065 contestants overall in Kansas City. Gyhra, an apprentice line technician, was part of the OPPD teams that sent two journeyman teams, two other apprentices, three event judges, one event coordinator and one chief judge.

He loves the competition and thrives with all eyes on him.

“I believe it’s good to promote OPPD’s name and get younger kids interested in maybe someday working for a great company like OPPD,” he said.

Gyhra, 22, said he remembers watching his cousin that day, also a lineman, and loved witnessing the teamwork involved. He said it was inspiring watching the journeyman events, seeing them working in two- or three-man-crews.

“I know when kids watch, they think, ‘that’s so cool, I want to do that someday,’ ” Gyhra said. And that’s what led him to OPPD.

He competed in the national event last year and, while he didn’t place in the top five in any events, he figured he’d do well in the speed climb, based on practice and comparing his times with last year’s winning times. He admits he had no idea he’d do well in the hurt man competition.

Last year he finished seventh in the rope event and 20th in the speed climb.

He worked hard on improving and put in the hours to improve. He set up the events as well as he could in the yard and practiced when his schedule allowed.

Any secrets to his success?

“I don’t want to give them away,” he said. “I can say that what probably helped me most was practicing the different parts of the hurt man. Getting my stuff on, getting the dummy down. I practiced in segments rather than doing the whole thing straight through.”

He said he’d advise anyone interested in competing to study the rules for the event closely. The more familiar you are with the rules and understand them, the better your chances are of not breaking them in the event as you’re trying to do it as fast as you can.

He said it felt good hearing his name called, knowing all his hard work paid off.

“I feel honored just being part of something so big and so well known,” Gyhra said. “So many different companies around the world were represented, it’s a brotherhood.”

He said special thanks go to OPPD, his managers and senior management for giving him and all the rodeo competitors the opportunity to go down and compete. It’s something he’s going to keep doing and encouraging others to join him.

Now it’s back to doing the job he loves, keeping the power on for customers and working alongside his ‘brothers.” He said he does a lot of grunt work, getting materials ready for jobs, preparing for the day’s work assignments, whether it’s setting poles or installing padmount transformers. But he loves that it is something different every day.

“I try to learn something every day on the job,” he said. “This is a job where you never stop learning. The most rewarding and fun thing for me has been working on storms. You never know what you are going to pull up to.”

Gyhra graduated from Metropolitan Community College’s utility line school and then interned for Norris Public Power before getting hired by OPPD. He grew up on a farm near Pawnee City and worked for the family construction company and farmed.

Away from work he enjoys fishing, hunting and tractor pulling. And of course getting ready for next year’s rodeos.

The utility was recognized by U.S. Veterans Magazine as part of their 2020 Best of the Best honors.