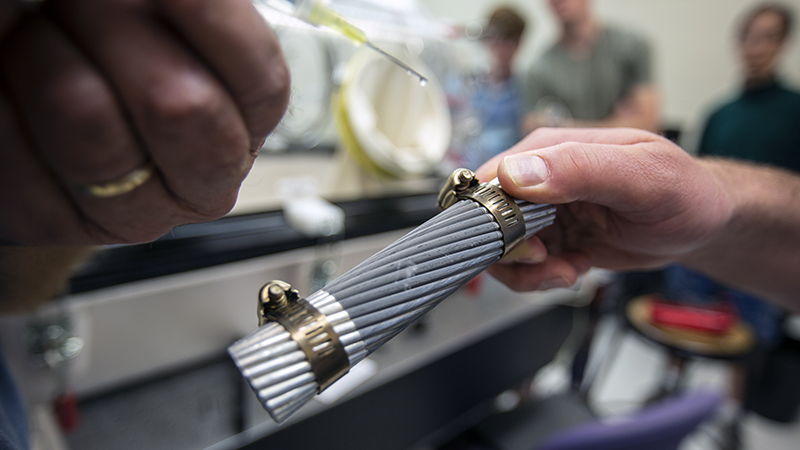 They say Mother Nature knows best. So it should be no surprise that the answer to the winter issue of galloping power lines could lie with the lotus leaf.

Galloping lines can create problems for utilities and their customers. Power lines can “gallop” when rain freezes and coats the lines. As rain freezes on the line, it forms a teardrop shape that encases the wires and acts like an aerodynamic airplane wing. When wind blows, wires can start to move up and down in an oscillating motion.

That galloping action causes outages when the lines come into contact with other lines. That contact causes electricity to jump between lines, which can damage equipment on the poles like the cross arms, and sometimes can even weaken the pole itself.

Galloping lines can happen anywhere but are more common in rural stretches where there are fewer structures to block the wind, leaving lines more exposed to high winds.

OPPD is using a newer technology in some of the areas that have been prone to galloping before. Air flow spoilers that wrap around the line can help keep wires from bouncing so much in the wind.

But researchers at the University of Nebraska-Lincoln are looking at using lasers to someday battle the problem of galloping lines.

The multidisciplinary team in CEFS is using lasers to create surfaces that mimic those found in nature. Those surfaces include the lotus leaf or a shark’s skin, which are super-hydrophobic and would cause rainwater to slide off rather than absorb or wick into the structure.

In their lab setting, CEFS researchers have coated small sections of power lines and tested them to see how they react. The portions that have been treated by the laser don’t absorb the water; instead it bounces off.

The lasers use extremely short-burst pulses that last only fractions of a second. The lasers are two-feet by three-feet and sit on the end of an optical table. Boeing has used the surfaces UNL has created for anti-icing work on aircrafts, Zuhlke said.

“We create micro and nanoscale surfaces,” he said. “You have to get the surface texture and the chemistry right for it to work. We’ve shown we can create anti-icing surfaces and that we can process small pieces of power lines.”

But for now, the technology isn’t scalable. The lasers can currently treat a few square inches in an hour.

“That doesn’t get you very far on a power line,” Zuhlke said. “But laser technology grows so fast that it’s hard to say where this will be in five to 10 years.”

The possibilities have caught the attention of OPPD personnel. Zuhlke has met with Matt Hardebeck, OPPD’s director of Innovation and Continuous Improvement.

The development of this kind of technology will have lasting value-adding impacts on a multitude of sectors, Hardebeck said.

“For me, it really highlights why OPPD is continuously scanning the technology and research and development arenas, looking for opportunities that can create operational advancement and provide new value to our customers. As the world continues to shift and evolve, so must our search for new partnerships and new tools to meet the changing landscape of tomorrow’s energy industry.”

Forecasters expect above average precipitation in February and March, but not enough to ease the area's drought conditions.