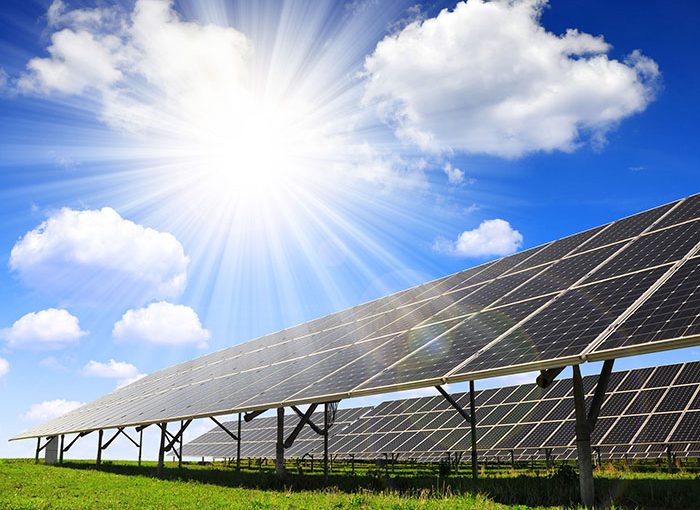 Wind and soon solar are OPPD’s main sources of renewable energy in its generation mix.

Each one has its own ways of harnessing its sources of power – wind and sunlight. And each uses different materials and technologies to turn those elements into energy we can use to power our lives.

What are the different types of solar panels?

Unlike monocrystalline and polycrystalline solar panels, thin-film panels are made from a variety of photovoltaic materials, which are deposited or painted on plastic or glass. Thin-film solar panels can appear blue or black in color, depending on their composition.

How are crystalline solar panels made?

Crystalline solar cells are made of silicon, the main component of natural beach sand. Silicon is abundantly available. In fact, it is the second-most-available element on Earth.

Silicon is formed into blocks that are treated with boron and phosphorus to enable the photovoltaic effect. They are then cut to form individual solar cells. To make the cells functional, a silver paste is printed on the surface to collect and carry electrons.

The amount of silver used per panel varies by size, but is typically less than 25 grams. Tin-coated copper wires normally connect solar panels with numerous solar cells. The cells are typically encased in a thin layer of glass on the front side and a polymer-based material on the back. The frame that holds the panel together is normally aluminum.

What materials are used to make solar panels?

The amount of each material differs by panel size and manufacturer, but crystalline panels consist of glass, polymers, aluminum, and silicon, and very small amounts of copper, silver, and tin. Films of semiconductors deposited on glass, plastic or metal make up thin-film solar panels.

Are the materials toxic?

When there is a claim that solar panels include “toxic” and “unsafe” chemicals, it is normally referring to thin-film panels. Thin-film photovoltaics may contain heavy metals, such as cadmium, but studies have found that these metals do not leach from the modules into the environment under normal conditions or anticipated accidents such as storm damage or fires. Most panels pass the EPA’s Toxic Characteristic Leaching Procedure (TCLP) test, classified as non-hazardous, and not regulated as toxic materials.

Can solar panels catch on fire?

Only a small portion of a solar panel is flammable, and those components cannot support a significant fire. Even in the case of a fire, research has found the fire will melt the glass and encapsulate most of the panel materials in the molten glass.

Can you recycle solar panels?

It is estimated that anywhere from 85% to 100% of a solar panel are recyclable. Reuses include more solar panels or other products such as reflective beads for roads. Solar panel recycling is still in very early stages, but as more panels reach retirement, and as the market continues to grow, it will play an important role in the solar industry.

Where are solar panels made?

Solar panels are manufactured all over the world. The majority of panels come from the United States, Malaysia, Vietnam and China.

Are wind turbines made from rare materials?

Wind turbines are predominantly made of steel, fiberglass, resin or plastic, iron or cast iron, copper and aluminum. Like many other generators, the generator used by some turbines may include permanent magnets composed of the rare-earth element neodymium. Rare-earth elements are minerals found in relative abundance across the globe, but tend to be more expensive because they typically do not occur in concentrated deposits.

Common items that also use neodymium magnets include hard disk drives, microphones, headphones, cell phones, computers, jewelry, bearings, and antilock brake (ABS) system sensors. The mining done to procure materials to make wind turbines are the same as any other facility or product that uses them.

Can you recycle wind turbines?

According to Bloomberg Green, about 85% of turbine components, including steel, copper wire, electronics and gearing can be recycled or reused. However, the blades remain difficult to dispose.

Wind turbine blades can withstand hurricane-force winds, which makes them very difficult to repurpose. Unfortunately, many blades are cut into pieces and buried in landfills. However, as more blades near their end-of-life or are replaced, this should push the industry to focus more on viable methods to recycle the blades.

For example, one company has found a way to recycle blades by grinding them into small pellets that can be used for decking material, pallets and piping. Research is also underway, by national labs such as the National Renewable Energy Laboratory (NREL), on the next generation of wind turbine blades using materials that are easier to recycle.

Is there a fire risk with wind turbines?

It is possible for wind turbines to catch fire, but it is not common. An estimated average of one fire per 2,000 turbines occurs per year. If components inside the turbine fail, this can generate heat or sparks. The sparks can ignite flammable materials such as plastics, resins, fiberglass and hydraulic lubricants. Additionally, the height and isolation of wind turbines make lightning a persistent and real threat. Fires from lightning strikes are possible, but a properly installed lightning protection system can effectively and safely reduce that risk.