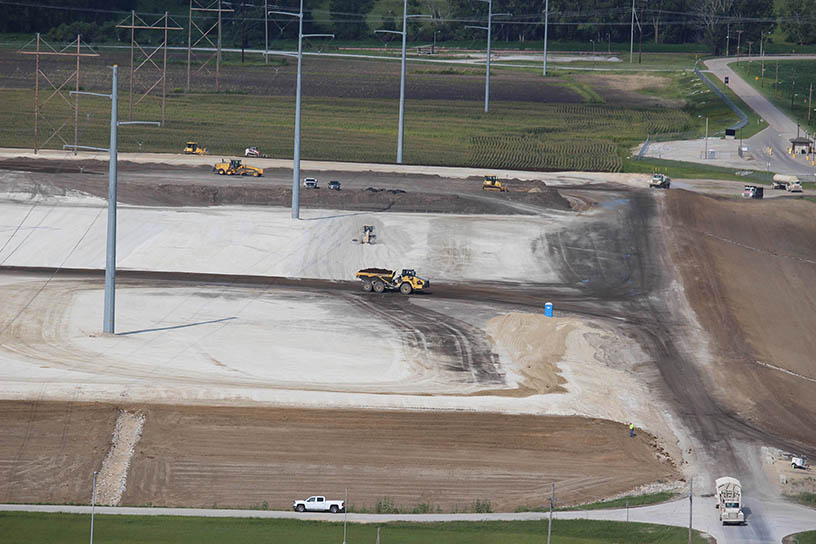 Coal fly ash is a naturally occurring byproduct of the coal combustion process.

Its composition is nearly identical to volcanic ash.

The 16-acre landfill for Nebraska City Station’s Unit 1 went into service in 1979, when that unit came online. In 1982, OPPD expanded the landfill to approximately 52 acres. When filled to capacity, it will rise 60 feet above existing grade and contain approximately 3.3 million cubic yards of ash.

OPPD sold much of the fly ash for reuse in concrete and other beneficial uses approved by the state, according to John Wichman, senior production operations engineer.

The Unit 2 landfill went into service in 2009 and is permitted for three, 14-acre horizontal cells. When filled to capacity, each cell will rise 80 feet above existing grade and contain approximately 3.9 million cubic yards of ash.

The landfill will then remain idle until the Unit 1 landfill is full. To maximize the use of the permitted landfill volume, Unit 2 ash will combine with ash from Unit 1 and go into the Unit 1 landfill. To date, pollution control equipment has rendered Unit 2 ash unsuitable for beneficial reuse, requiring 100 percent of this ash to be landfilled onsite.

The process of closing a coal fly ash landfill involves covering the ash with 18 inches of clay soil, then six inches of topsoil, which will be seeded with vegetation. This structure forms an impermeable barrier to storm water and decreases landfill maintenance.

“We want to keep storm water from coming in contact with the fly ash and running off the landfill site,” Wichman said.

Coal fly ash hardens to the consistency of concrete when exposed to the elements.

Groundwater monitoring wells, located around all of the landfills, check for any contamination. Even after closing a landfill, OPPD must ensure groundwater is not impacted during a 30-year monitoring period.

OPPD purchases soil for closure projects from farmland several miles to the east of the power plant.

Even though it took about 30 years to reach the first phase for the Unit 1 landfill, Wichman said the next phase closure will come sooner.

New emission controls placed on the generating units will likely render the fly ash unusable for resale purposes in the near term. This will result in higher amounts going in the landfill than in previous years.

If none is reused, the landfills can secure almost 330,000 tons of coal fly ash per year, based on historical data.

Nebraska City Station, along with Production Engineering and ERA are working on future plans for additional onsite landfills once these reach capacity, Wichman said. However, OPPD is investigating potential uses for the coal fly ash generated by both units with the pollution control equipment.