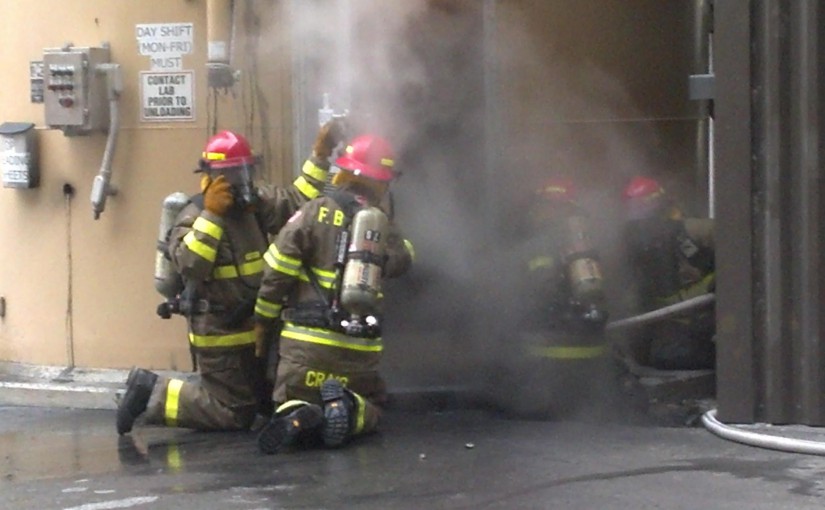 Making electricity can be dangerous. OPPD and the surrounding communities rely on big baseload plants to keep the lights on year-round. And trained personnel who serve on fire brigades are there to keep those plants and the people who work there safe.

Those involved with the brigades say consistent, hands-on training is key to being ready if, and when, they are needed to respond to a fire.

But the level of readiness and the expectations of OPPD’s fire brigades differ from plant to plant.

For NCS, with its remote location – the response time for Nebraska City’s volunteer fire department is about 20 minutes – the importance of a well-trained and able fire brigade is crucial.

The same applies to Fort Calhoun Nuclear Station (FCS), which is required to have a fire brigade per the station’s operating license. It has had a brigade since the plant opened in 1973.

Thom Swanson, Fire Marshal at FCS, said their fire brigade is trained to handle “everything inside the fence.”

FCS has 50 people currently serving in their fire brigade – five or six members per shift – made up of plant equipment operators. There is a live burn pad on site for training, but members also train twice a year at Bellevue Fire Department’s training tower.

In addition to fire training, Swanson said the FCS fire brigade must train for other scenarios at the plant, including measures to keep the nuclear fuel safe in case of an accident.

“If something happens, they have to stand alone,” Swanson said. “In my opinion, an adequately trained equipment operator is more suited than a professional firefighter to respond here. They don’t understand the mechanics and geography of the plant like we do.”

“These guys are firefighters, that is the level we are training them to. They are the FCS firefighters.”

While the other plants are isolated due to their location, North Omaha Station (NOS) is less than three miles away from Omaha Fire Department (OFD) Station 22. That plant’s fire brigade is just being formed.

Plans call for eight volunteers to serve on the brigade with training to begin in mid-November. Training will be done at Nebraska City Station.

NOS plant manager Dave Wetrosky saw the need to have a fire brigade that could handle more than an incipient fire – considered the first stage of a fire that is usually smaller. Wetrosky said they also needed trained personnel who could enter smoke-filled areas in the plant. OFD personnel do train at NOS, but they still have limited knowledge of the plant layout and possible hazards.

“For a small cost, we went a long way to improve emergency response at the station and the safety of all the employees that work at the plant,” Wetrosky said.  “We also improved coordination with the Omaha Fire Department and enabled them to respond quicker and safer in the future.”

All OPPD fire brigades go through about 50 hours of training. Wayne Neuhofel, a senior I/C tech, is the fire brigade leader at NOS. Wetrosky approached him about the role since Neuhofel is also a volunteer firefighter and emergency medical technician for the Ralston Fire Department.

Neuhofel said the fire brigade at NOS will likely train for fire containment rather than fire control and access. But the certification will also mean NOS will be a basic non-transport EMS service, meaning they can keep and administer oxygen, certain prescription medications and tracheal tubes.

“Being a large plant and the types of injuries we could potentially have – falls, burns, electrocutions – the faster we can start effective treatment, the better off the patient will be,” Neuhofel said.

At Nebraska City Station, shipping containers were fitted for use as burn rooms. The National Fire Protection Association call for a minimum of one live interior burn scenario be done per year.

“There are a lot of unknowns with coal,” Kutz said. “Coal dust burns like coal in a grill, but stirred up, it can be like gun powder.”

Chris Romaire, shift supervisor at NCS and a fire brigade member, said along with training the fire brigade members, it’s important to keep up a good relationship with the local fire department. He said there are always concerns about how to respond to fires at a plant that produces electricity. There are questions about spraying water on energized lines and the dangers of secondary explosions in coal silos.

“We train that safety comes first, stress the need to take your time,” Kutz said. “It’s not like on the news where you are rushing into a burning house. We primarily concentrate on the proper way to extinguish a fire and the caution needed for coal fires.”

Kutz said Nebraska City fire brigade members are also part of a “users group” for other plants who use Powder River Basin coal, the group allows them to share experiences about different types of fires they’ve encountered.

But the best way to fight fire fires? Prevention.

“The best and most effective tool we have is our housekeeping,” Romaire said.

“This reduces our fires significantly. We are always working on mitigation practices, keeping coal dust where it is supposed to be. It is literally the best tool we have.”