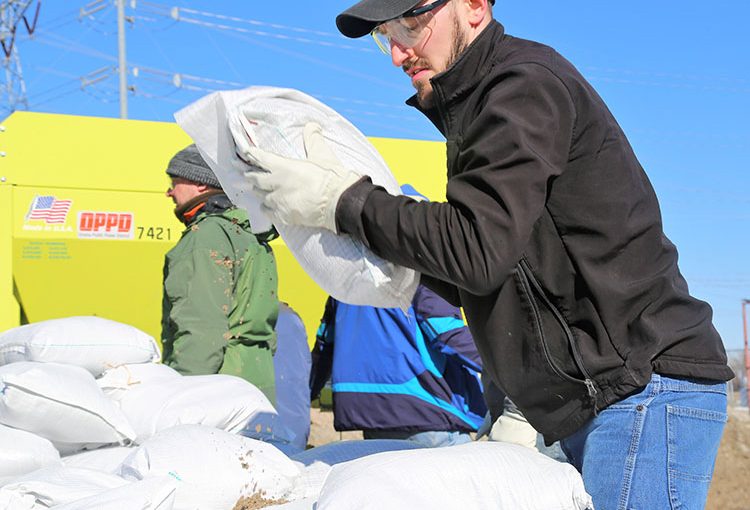 OPPD crews and employees have been working around the clock to ensure power keeps flowing to customers as historic flooding batters much of eastern Nebraska.

The utility took protective measures at all OPPD generating stations located along the Missouri River, as well as infrastructure around the district threatened by floodwaters. There has been a coordinated effort across the service territory and the greater region to protect against the flooding.

Preparations at one of the plants, Nebraska City Station (NCS), shifted in response to a dramatic overnight rise of Missouri River water levels. The river rose significantly overnight Thursday, March 14, exceeding predictions from the U.S. Army Corps of Engineers and the National Weather Service (NWS).

The condition of nearby rivers and tributaries, full of debris and ice, may have damaged some of the gauges in place in these waterways.

OPPD’s two other generation plants located along the river – North Omaha Station (NOS) and Fort Calhoun Station (FCS) – were in good shape with their flood preparations. Personnel from those plants transitioned to NCS to assist with protection measures.

Plant personnel and contractors had been working on a planned maintenance outage on Unit 1 at NCS before the flooding. OPPD put that outage on hold Friday morning, March 15. At that time, staff transitioned to refocus on plant protection after river waters started encroaching on the levee.

OPPD personnel made the decision to power down the plant’s other unit Friday night. This was done as a safety measure in light of the continued threat posed by the river. Unit 2 was taken offline just after 7 p.m. Friday, March 15.

“We decided Friday morning we would take Unit 2 offline to be proactive and as a safety precaution for our workers,” said Joel Johnston, director of Integrated Work Management & Planning at OPPD.

There were concerns that floodwaters would overtop the levee that helps protect the plant. A lower-lying area on the levee about one mile south of the plant is being closely monitored as waters rise. OPPD will also use aerial inspections to monitor the levee.

The levee stretches along the plant’s boundaries and buffers it from the river. The morning of March 15, the river levels were just over 925 feet, which is two feet higher than the previous record of 2011. By later that night, it had risen another foot.

“We’ve been tested before and our dedicated employees continue to deliver,” said Tim Burke, OPPD president and CEO. “Across our organization, we have established procedures for dealing with flood conditions. Our men and women have diligently followed those processes, and are working courageously and safely to keep the power flowing to our customers.”

At NCS, employees continued working through the night Friday and into Saturday morning enacting protection measures both inside and outside the plant.

During a Friday press conference, Nebraska Gov. Pete Ricketts called the flooding the worst the state has experienced in 50 years.

Much like the devastating 2011 flood, OPPD personnel worked in the days leading up to the flooding to protect the utility’s critical infrastructure and ensure customers still had power.

Johnston said, on one hand, it was good that the unit was in a planned outage. That meant more people were working at the site. And at this time of year, demand for electricity isn’t high. That’s why OPPD scheduled the outage for this time.

Burke said even though both units at Nebraska City were not online, the utility is working ensure the district’s power needs are met. OPPD is utilizing several of its generating stations that are not located along waterways.

“We will have enough power to serve our customers,” Burke said.

About 100 people were working around the plant on sandbagging, moving equipment to higher ground and other protection activities, Johnston said.

Officials said a handful of essential employees will remain at the plant to monitor the shutdown, even after sandbag protection measures ended.

On Wednesday, OPPD activated its Business Continuity Plan and followed set procedures to prepare for and deal with severe weather situations that could threaten infrastructure.

At OPPD’s other plants situated along the Missouri River, and at utility substations and other infrastructure, employees have enacted protection plans.

North Omaha Station sits along the river, but is high enough in elevation that it only needed a small amount of sandbagging. Fort Calhoun Station, the utility’s plant that ceased operations in 2016 and has been safely decommissioning, had areas where employees put up sandbags. Employees finished that work Friday.

OPPD continues to coordinate with partners at the local and state levels for the safety of the public, employees and contractors.

River levels are expected to crest over the weekend, depending on the location.

Across the state, a number of roads and highways, including a large section of Interstate 29 in Iowa were closed. There were reports that several dams around the service territory were compromised.

OPPD officials will continue monitoring the flooding and react as needed until the waters receded and the threat to plants and infrastructure has ended.

Cris Averett of OPPD Corporate Communications took the following photos of the preparations around the district.