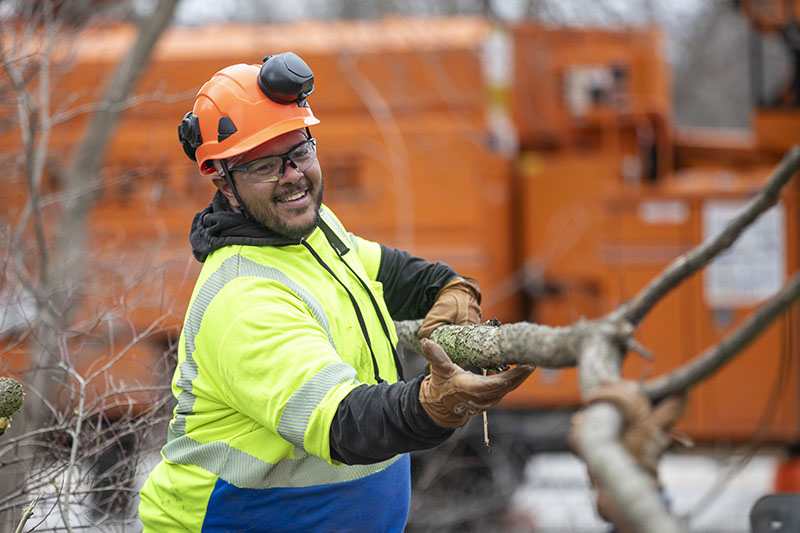 For years, OPPD’s reliability scores have been a source of pride for the utility, consistently ranking among the best in the nation. The scores helped draw some of the best companies in the world to the OPPD service territory.

In fact, the entire state has a reputation for elite power quality. Nebraska consistently ranks as one of the top states for electric reliability performance, coming in as the top-performing state several times in the past in the U.S. Energy Information Administration’s annual rankings.

Electric reliability generally is measured by showing the duration of outages, known as System Average Interruption Duration Index (SAIDI). OPPD’s goal is to limit SAIDI to 90 minutes per year, per customer, which is the nationally recognized standard. 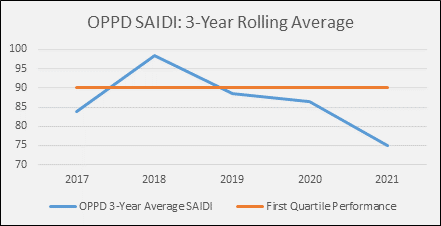 But in 2018, the SAIDI number trended in the wrong direction – SAIDI was above 95 minutes. As a result, the utility budgeted more money to address areas that the data showed were contributing to an increase in outage duration.

OPPD has several programs to keep the electric system reliable that have been in place for many years:

The targeted approach worked, and by 2019, OPPD’s SAIDI was again under the 90 minute threshold. At the end of 2021, that reliability score had further improved: OPPD’s SAIDI score was 74.9, the lowest it has been in at least five years.

How did reliability score improve?

The increase in budget is the biggest factor. For a short while, OPPD allocated some money to other areas of need in the utility or to other projects. With such high reliability, a short time change in the budget was justifiable, knowing it would only be short-term.

It’s no big secret what the biggest cause of outages is at OPPD: trees. Trees top the list both for all causes as well as for causes that include “major event days.” Major event days include damaging weather events like the July 10 storm.

“We got off our tree trimming cycle for a while,” said Mike Herzog, OPPD’s manager of Distribution Planning. “John Buckley recognized that and really pushed for the more aggressive tree trimming plan. His group has done a good job on data analysis and prioritizing to make the program more effective.”

Buckley, OPPD’s director of Work Management, said the utility is spending twice as much money on tree management as it was five years ago.

“We have more crews out there and we are trimming for five years of clearance whenever possible,” Buckley said.

A change in how outages are reported has cut down on the category labeled “unknown,” Herzog said.

“You can’t fix ‘unknown,’” he said, so a concerted effort was made to ensure each outage was categorized as best it could be to cut down on the unknowns and find the actual causes so they could be addressed.

Now, to find another area that has seen a big improvement one must look down – underground, in fact. 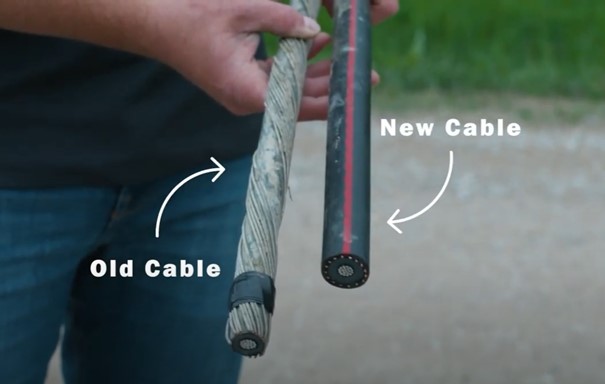 “It was this old cable installed in the 1960s and 1970s that didn’t have any protective cover,” Herzog said.

When underground cable fails, it can be a long fix and is tough to locate.

The goal is to replace 86 miles of unjacketed cable each year. The breakdown is typically 46 miles in the rural areas and 40 miles in the urban areas. More than 300 miles of underground cable has been replaced dating back to 2015, though the work really started to increase in 2018.

“My team works with contractors who put the cable in the ground,” Buckley said. “Then our crews come behind and terminate the old cable and rehook the new cable.”

David Spargo, manager of Asset Management & Maintenance at OPPD, said in 2017 there were 336 faults from these cables, which result in outages for customers and directly impact SAIDI scores. Last year the number of such faults was down to 216. Spargo said the utility hopes the number will be fewer than 200 for this year.

“When these cables fail, they don’t normally just fail once,” Herzog said. “They keep going out, and that’s a recipe for poor customer satisfaction.”

Such projects are underway all across the OPPD service territory. And they aren’t the only current projects targeting customer reliability. In places like Palmyra and Unadilla, crews are replacing overhead lines with underground lines and are rebuilding lines where they can’t be put underground, said Brad Ging, construction services coordinator at OPPD.

With so many programs in place and a high focus on reliability, OPPD officials expect those SAIDI numbers to stay strong.

“It is more about forward-thinking and focusing on ways we can improve,” Herzog said. “We are moving into the space of more advanced analytics and changing the way we are doing things, attacking the problem more.”