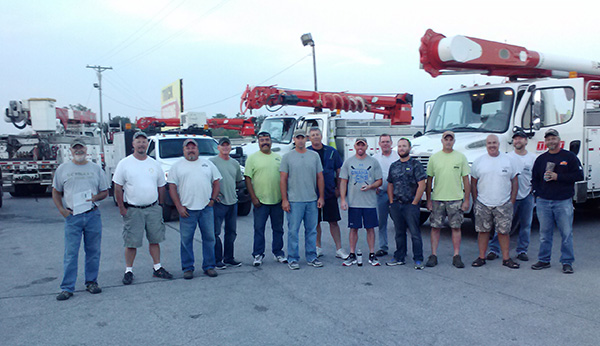 A total of 30 OPPD personnel and 42 contracted tree trimmers from the utility assisted Tampa Electric and Jacksonville Electric, both of whom were hit hard by the hurricane. Each OPPD group consisted of 12 lineworkers, two mechanics, a supervisor and the tree crews.

The OPPD personnel met up in Rockport, Mo., and formed a caravan to head south. The 21-hour trip is the furthest OPPD has sent crews in mutual aid support. Mutual aid is when other utilities help with power restoration efforts following natural disasters.

OPPD received mutual aid in June 2017, after a strong summer storm knocked out power to 76,500 customers and caused widespread damage to the transmission system. 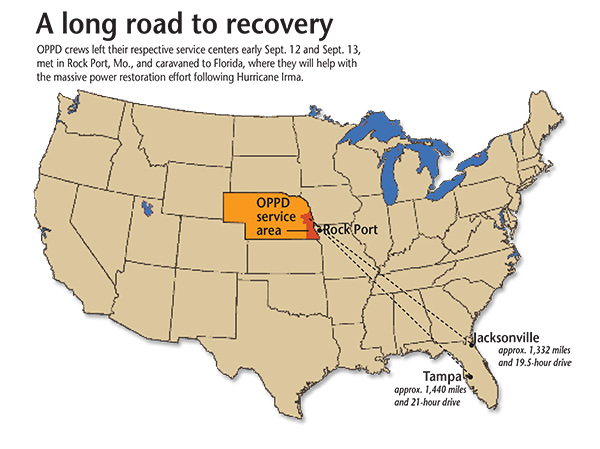 Typically, OPPD limits its mutual aid efforts to within 500 miles of its service territory. Catastrophic events or situations that need crews with unique skill are a couple exceptions.

Prior to Irma, the furthest distance OPPD crews traveled was in 2012 for Hurricane Sandy, where about 10 million customers in 21 states were without power.

OPPD’s Jerry Benedict was one of seven cable splicers who went to New York City to help restore power. The city was in need of experienced splicers to help repair underground vaults in the Big Apple. Benedict said there are unique challenges awaiting crews.

“Every system is different and that is part of the challenge,” Benedict, now a Transmission & Distribution field supervisor, said. “Every utility does things a little differently.”

Benedict said a big difference between Sandy and Irma for the crews is that this time, the crews drove, whereas Benedict and his co-workers flew to New York. Benedict said the crews will likely be paired with someone from Tampa Electric. They will accompany OPPD workers to help them get around the city and act as a “translator” for their system terminology.

“Safety is the number one thing,” Benedict said. “Being gone that long on the road is a hard thing to do. You have to be careful with fatigue. They try and put you up in hotels, but like with Sandy, there might not be hotels available or hotels with power. You may be sleeping in your truck.”