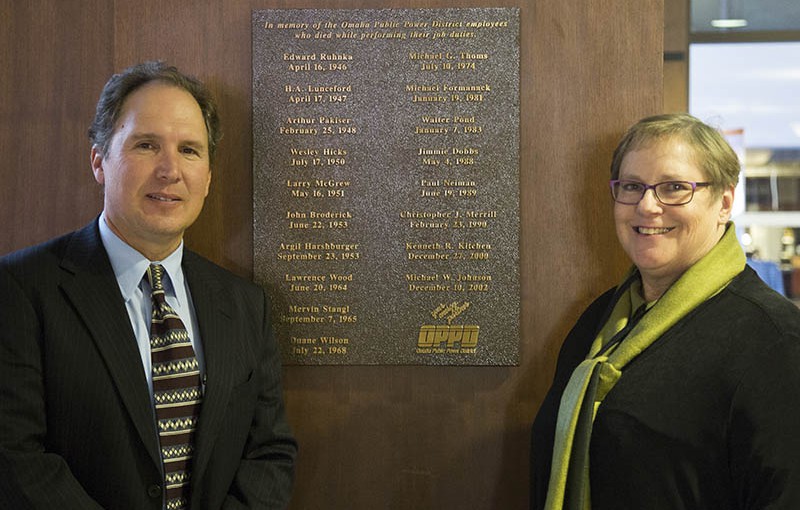 Jackie Jensen got the call that every parent fears.

Jensen was working as a radio control operator in OPPD’s Energy Control Center, charged with monitoring the two radio channels that connected the center with crews in the field spread across 5,000-square miles. She likened her support role to that of a parent. Before cell phones and mobile computers, the radio system was the only way crews stayed connected with the dispatchers. She still remembers one call on May 4, 1988.

There was an emergency in the field; someone was in trouble.

She immediately alerted the dispatchers.

Jimmie Dobbs, a 41-year-old lineman, was accidentally electrocuted while working with a crew to relocate a power line for a highway project. Dobbs was a husband, a father of two, and a friend to his Louisville office co-workers and other employees across the district.

Journeyman lineman Allen Kelsay administered CPR to Dobbs until the ambulance arrived, while others on site helped, too.

All work came to a halt

When a 10-X call comes in, all work in the field stops.

Crews in the field stay by their trucks for updates. Silence fills offices. Prayers fill heads. Minutes seem like hours.

Despite the lifesaving efforts, Dobbs died that day. Sadly, he is one of 18 employees who have died in the line of duty since OPPD began operations in 1946. The positions held by these men included lineman, substation operator, electrician, cable splicer and transportation mechanic.

A duty to honor them

That day still replays in Jensen’s mind, so when it came time to come up with a mentoring project in 2013, the Day of Remembrance was born.

“The first time I sat down with my mentor, John Thurber, he asked what I was passionate about. I replied, my family and my family here at work, and I started telling him why.” Jensen said.

Thurber, division manager of Finance, listened as Jensen told him about the great respect that she had for the people in the field.

“People take for granted what it takes to flip on the light switch,” Jensen told him. She knew the tough weather conditions under which they often worked, and she’d seen the many sacrifices field employees have made to restore power on holidays and weekends. She knew they missed family events and their kids’ activities. And then she talked about the guys like Jimmie.

“The city of Omaha was having a tribute for fallen police officers about that time, and I asked John ‘Why don’t we do something to honor our people?’”

His response: “I think we just found our project.” They initially chose Dec. 2 for the tribute because it is the day OPPD officially started operations. The first event was held at the utility’s Omaha headquarters, Energy Plaza, and family members of those honored were invited to attend. In December 2014, the Syracuse Service Center hosted the ceremony, at which a presentation included photos and details of the lives of each fallen employee, including how each died. This year, the event will be held Friday, Dec. 18, at OPPD’s North Omaha Power Station.

None of these fatalities has been in vain: OPPD has learned and improved its equipment, policies and procedures with each incident and safety remains a top priority.

“It is important to honor these employees,” said Jensen. “By bringing attention to them, we are reminding everyone of the reasons for our focus on safety.”

On the Day of Remembrance, flags at OPPD locations flew at half-staff, employees district-wide held a moment of silence, and workers kept the spotlight on these fallen utility workers.