Variety spices up the work week for ESD 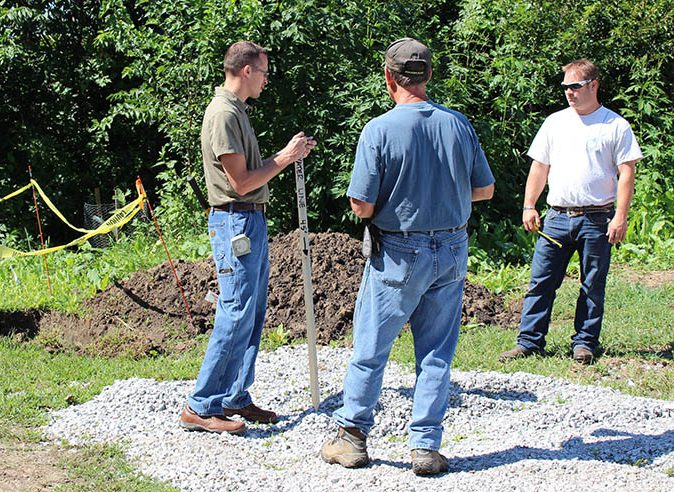 Mark Krepela’s days are rarely the same. Some involve driving many miles of gravel county roads. Others involve spending time on the phone or at his desk in OPPD’s Louisville office.

But whether in the field or in the office, Krepela is always working directly with OPPD customers.

He is one of the district’s 17 electrical service designers, or ESDs. The ESD position was created in the early 1980s as a combination of a customer service representative and a design engineer. Although none are certified engineers, they represent nine different career backgrounds. Each ESD is assigned a specific area within OPPD’s 13-county service territory.

Krepela, based out of OPPD’s Louisville office, is responsible for much of western Sarpy County, including Gretna, the area south and west to the Platte River, stopping at Harrison Street to the north.

A recent work day for Krepela involved checking on the progress and location of on-site equipment, consulting with a commercial customer about a new building project and driving dozens of miles criss-crossing the county to visit homes being built on acreages.

Krepela said he can have anywhere from five to 20 customer jobs in progress at the same time, with a lot of his job involving work with builders and electricians regarding load needs and equipment location. He then coordinates the work with OPPD crews from the district’s Ashland, Louisville, Elkhorn and Papillion offices.

“This job is a lot of checking on progress and what they need for projects,” Krepela said.

He works with OPPD engineers on planning infrastructure projects. If a customer project will add a lot of load, Krepela will also meet with energy planning personnel to ensure the customer’s needs can and will be met.

Future development The Cloisters on the Platte, being planned by Joe Ricketts, is one such large-scale project Krepela is working on. Ricketts wants to preserve as much of the natural surroundings of the property abutting the Platte River to the south and I-80 to the west.

To accomplish that goal, Krepela is consulting with the developer.

“He doesn’t want to see any equipment, so we have to work with them on how to camouflage it.”

Krepela is there from the beginning as Gretna Public Schools plans a new middle school south of 192 Street and Giles Road. The school and their architects consult with Krepela regarding placement of transformers and lines onto the property. He stressed that these types of projects plan for immediate development, but also look ahead to any future plans for the property.

In addition to infrastructure needs, Krepela helps these customers budget their energy use. He looks at their existing usage and determines the affect of new projects and buildings.

On this particular day, Krepela stopped by several smaller-scale projects. At acreage homes under construction he checked on the installation of transformer pedestals or if they were put into use.

Not all acreages are small customers, however. Krepela is working with a couple homes under construction that require the same amount of power used by a small strip mall. They have more than 10,000 square feet of space each.

Longtime customer Vala’s Pumpkin Patch sought Krepela’s input when they extended power to a new building. During his stop at the popular Sarpy County attraction, Krepela flagged a path for crews to follow when they come to bury an underground line.

Visitors to Vala’s will never know that electrical equipment is underfoot as they traverse the corn maze or ride the train. Nor will other customers understand how Krepela and other ESDs bring their electricity to life. But with ESDs serving as a link between customer and utility, OPPD can make sure all needs are met.