Overnight transformer move made without a hitch 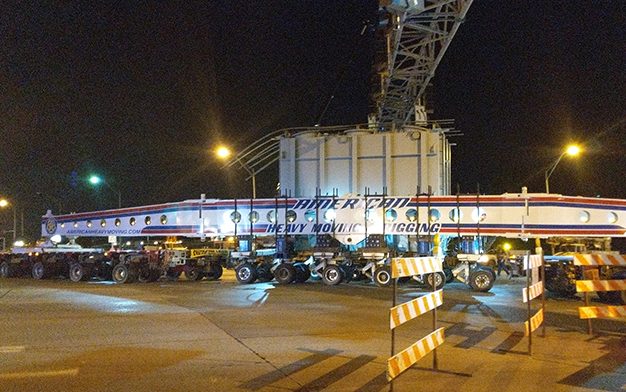 The second time was a charm.

Crews successfully moved an auto transformer from OPPD’s Elkhorn Service Center to a northwest Omaha substation in the early morning hours Wednesday, May 16.

The transformer, a spare from rural Cass County, was first moved to the metro area in late April. A move through three counties involving heavy moving equipment and a train.

The move was attempted last week, but a broken hitch on one of the trucks used delayed that attempt. Crews started the move at 10 p.m. Tuesday and traveled about 10 miles, arriving at their destination hours later under the watchful eye of a number of onlookers who gathered at various areas to see the massive move. The Nebraska State Patrol (NSP) assisted with traffic control.

With a weight of nearly one million pounds, involving a trailer that was almost as long as a football field, the move was slow and cautious as it proceeded down West Maple Road.  Three trucks – with 7-foot-high tires – were used, one truck

“This was an enormous effort, involving many OPPD employees from at least a dozen parts of the utility – Elkhorn and Louisville Service Centers, Elkhorn Stores, Production, Facilities, Security, Integrated Work Management, and SCM,” said Chuck Manternach, principal engineer Substation Operations. “Everyone came together and worked hard to make this a safe and successful move.”

OPPD received a lot of help in the big move from California-based American Heavy Moving & Rigging.

Along with the NSP, state and city roads and streetlight crews and various OPPD crews assisted. Among them, line technician Dan Larrick.

“I’m going to be going up and moving the (power) lines when the transformer comes…making sure we have enough clearance,” Larrick said.

Another crew member de-energized the lines ahead of time, and re-energized it, after the the trailer safely passed underneath. No residential customers lost power during the process.

The entire procession attracted attention all along its journey.

“We saw it (the transformer) during the day and a lot of us walked over and took pictures,” said Curt Wagner, who works for CSG near where the journey started. “And we came out tonight, just to see how they were going to do it.”

The spare transformer was housed at a rural Cass County substation. Heavy Hauling moved it to a train yard in nearby Murray, Neb., in late April. The transformer was shipped by Union Pacific and then taken to OPPD’s Elkhorn Service Center, and finally, to the substation in northwest Omaha.

As big as the Cass County move was, the Omaha one was bigger, said Lee O’Neal, manager Substation & System Protection.

There are more state and city road regulations, as well as weight considerations, for the roads and bridges on which the transformer traveled.

O’Neal said the trailer measures 300 feet and weighs nearly 1 million pounds once loaded with the transformer. It took up both the east- and west-bound lanes of Maple Street for a portion of the move. The massive trailer has 40 axles to distribute the weight in order to meet road standards.

There have been a few challenges getting the move done, O’Neal said, including weather delays, route approval and restrictions on the height.

“Chuck Manternach led a team that started route planning in October,” he said. “A move like this requires a lot of planning and a lot of different areas. This is believed to be one of the largest pieces of equipment we’ve ever had to move.”