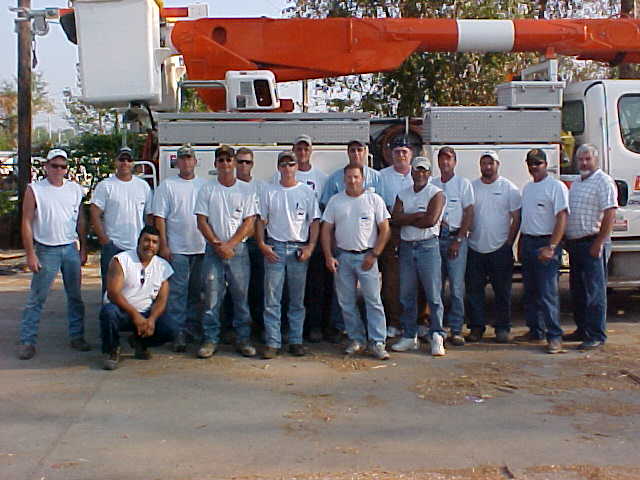 Eight, three-person line crews, accompanied by two supervisors and four mechanics, loaded up trucks and took off from OPPD’s Papillion Service Center August 29, 2005. T&D Field Supervisor Paul Oddo was among those ready to pitch in, but not fully prepared for what they would encounter.

And all these years later, those they helped are still expressing their gratitude. 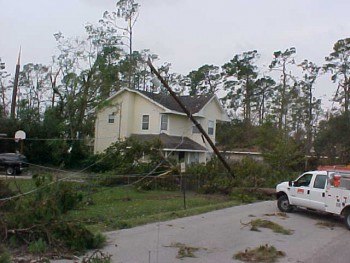 At one point, 1.1 million customers were without power in Louisiana and Mississippi.

OPPD crews landed in the Jackson, Miss., area first. One of the families they helped, the Watkins, lived in a suburb just outside the city. They had been without power for about a week by the time they saw an OPPD truck.

“It was a long week, because it was summer in Mississippi,” said Bill Watkins.

Watkins said there was a huge tree blocking the road, but the OPPD truck made a make-shift trail to get around it. He flagged the workers down, asking for help. They did just that, coming back with help to move the tree.

“They got the service pole back up and got the power going by midnight. It was wonderful. They had a good attitude. They had a can-do attitude.”

The hurricane took out 3,000 miles of Entergy’s transmission system, including 262 substations, in Watkins’ area. OPPD crews worked there for eight days before driving to New Orleans to work another eight days, helping the Central Louisiana Electric Cooperative.

“Driving down the interstate into New Orleans, which was almost completely evacuated, was very surreal,” Oddo said. “Almost scary. We had to come across the Lake Ponchartrain causeway. You’re driving and you don’t see anything. Then you get closer, and it looked like we were driving right into the city.”

Trees, pieces of homes, and other debris were scattered everywhere.

OPPD crews worked alongside other utilities from across the country, rebuilding as much as they could. They worked 16-hour days, sleeping on makeshift cots in schools or other buildings.

“It was one of the more gratifying mutual aid tours that we have done,” Oddo said. “The number of people and organizations who came together to help the area was amazing. I’m glad we got to go.”

Blaine Dinwiddie, division manager of T&D Operations, who oversaw the effort from Omaha, said it was the farthest OPPD had ever sent crews at that time. The crews worked hard, and it was an incredibly rewarding experience, he said.

The trip was worthwhile for more than humanitarian reasons.

“There are opportunities to make our storm restoration better by learning from a restoration like this,” Oddo explained. “They were so organized. The logistics with the tree crews, the outside utility crews, people who would do your laundry, feed you … it was impressive.”

Those impacted by the storm showed their thanks in many ways.

Bill Watkins sent a note to OPPD shortly afterwards to thank the crew that came from so far to restore his power, and the power of thousands of other hurricane victims. And he received something in return that he never expected.

“They sent my son, Bray, a toy boom truck,” he said. “I couldn’t believe it. It was the neatest thing.”

Ten years later, as Watkins’ local newscasts are running wall-to-wall hurricane remembrance stories, he keeps looking at that toy truck with an OPPD logo on the door. “It’s bringing back so many memories.”

Watkins felt compelled to call OPPD this past week and thank those who spent long, hard days restoring power to another utility’s customers. He struggled to find the exact words he wanted to relay.

“Just … a heartfelt thanks,” he said.