‘Genuine compassion’ led retiree to second career as a nurse 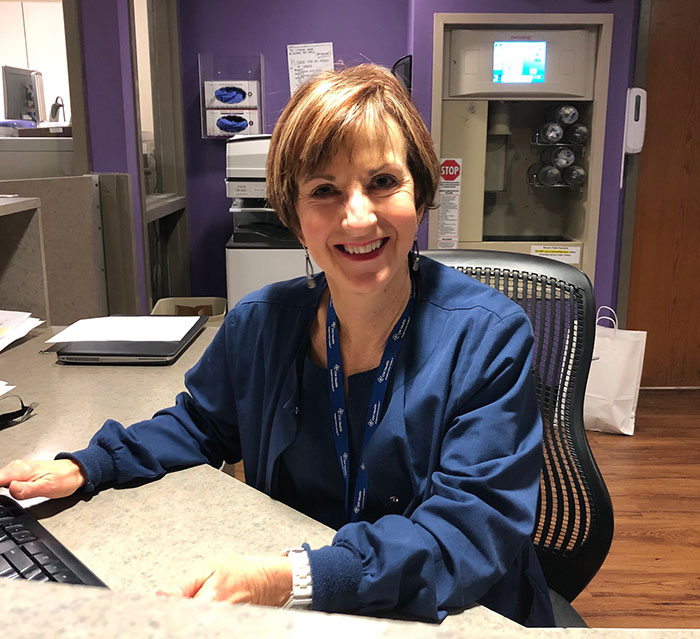 There’s only one nurse who can claim a 36-year utility career that encompassed everything from working in accounting and at two OPPD power plants to managing the utility’s emergency preparedness effort.

That nurse is Mary Finley, a behavioral health nurse at CHI Health’s Immanuel Hospital in Omaha.

“When I retired, I worried about what I was going to do,” said Finley, who was in her mid-50s at retirement.

After working as a Home Instead caregiver for three years post-retirement, she thought about getting her CNA (certified nursing assistant) accreditation for more opportunity. But she met a woman about her age who was going back to nursing school.

“That put a bug in my ear. I thought to myself, ‘maybe I should be a nurse.’”

Over those three-plus decades at OPPD, Finley advanced her career by taking advantage of development opportunities, training programs and going back to school twice. She got her bachelor’s in General Studies from the University of Nebraska at Omaha in 1989, then earned a master of arts in Management from Bellevue University in 2005.

It’s that drive, combined with a tugging at her heart, that led her to the University of Nebraska Medical Center nursing school in 2014. But not before a few stops at Metropolitan Community College to complete several math and science prerequisites, like chemistry, anatomy and physiology, microbiology and algebra.

Finley’s work ethic and schoolwork led to a Regent’s scholarship for nursing school. And after completing the two-year program, she graduated with high distinction.

“I don’t even know how I did it,” said Finley, who is thankful it all worked out. She credits a very supportive husband, Gregg, and her sons Evan, 25, who works at Hy-Vee in Omaha, and Nick, 23, who works as an event designer in Chicago.

Retiree Alison Rider, Finley’s long-time OPPD boss, said Finley’s accomplishments do not surprise her at all.

“Mary has so much heart and genuinely cared about employees who reported to her, her peers, her customers,” said Rider, who led OPPD’s Facilities Management division when she retired in 2010.

Rider said you could always count on Finley because she was thorough, paid attention to detail, and strove for excellence.

“She has an excellent work ethic. She takes responsibility,” said Rider.

“Nursing is such a fit for Mary,” Rider added. “She’s compassionate, a good listener, wants to help whenever and however she can. In her OPPD job, she went to great lengths to take care of her customers, to support her peers, to carry her weight – and sometimes the weight of others – on the many project teams she participated in. She could lead the group or be a member of the team, whatever was asked of her. And people knew she sincerely cared about them and about the work.”

Finley joined the utility straight out of high school in 1974, working her first two years as a junior file clerk in Customer Accounting. That job entailed going through piles of checks and stubs and balancing them all day long.

Number crunching got her in the door, but Finley took her first of many forays into other areas of the utility by transferring to North Omaha Station to work as a secretary, where she would hold down the front office for seven years. After that, she became division secretary for a new General Services division, which later became Facilities Management, that oversaw all OPPD facilities in the 13-county service area.

Another door opened for Finley in 1990, when she was named to a new position as facilities coordinator for Fort Calhoun Station. The 700-plus employees at the nuclear plant relied on her for a wide range of facility services.

Finley credits Rider and Marc Nichols, another former boss, for encouraging her to continue education and development. Their advice led her to management roles – supervisor of Mail Services and manager – Emergency Preparedness & Business Continuity – before retiring in 2011.

The business continuity team that she oversaw fared well shortly after her retirement. The utility had to activate that team June through September that summer to protect OPPD’s $3 billion in assets during the historic Missouri River flood of 2011.

“I like to learn and I like the challenges,” said Finley, who was by far the oldest in her nursing class, with the closest classmate in age being in their 30s.

In July 2015, Finley passed her boards. At the recommendation of a professor, Immanuel Hospital offered her a part-time position in behavioral health, where she still works with children and adolescents, ages 5 to 18. She currently works two, 12-hour shifts a week, including covering weekends every third week.

One of the best things about her job, she said, is making a difference in the patients’ lives. After doing her nursing duties, she enjoys sitting down and talking to the patients, their parents and their guardians.

“I hope that maybe one little thing I said or did will make a difference,” she said.

Rider can attest that Finley does make a difference as a nurse.

“In July of 2016, when I found out my cancer had returned, and how serious my situation was and the expected length of recovery, Mary was one of the first people to reach out and offer to help any way she could.

“And I really did need some people with medical expertise. She even came to learn from the VNA nurse what I needed and how to care for me. I felt very safe with Mary. She’s one of my angels.”

Finley made a big impact on areas of the utility that she touched. She continues to share her special energy with countless children and their families in her second career.

For these triplets, OPPD is a family tradition

Brothers Dan, Eric and Matt Tesarek all work as electrical engineers at OPPD, following in the footsteps of their father, who spent 34 years with the utility.