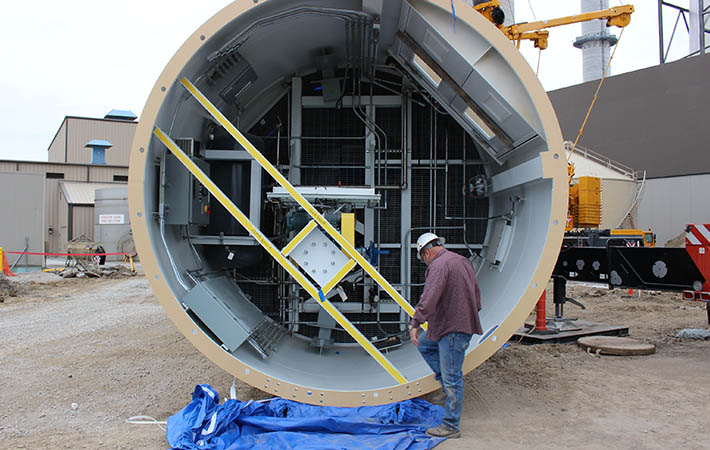 Imagine equipment big enough to make you step back and squint up at the sky in order to take it all in.

That was the scene at OPPD’s Nebraska City Station where emissions control work is being done on Unit 1.

Stohlmann’s inner child was visible when he was at the plant overseeing the installation of three large storage silos. Big projects like this – OPPD’s dry sorbent and activated carbon injection project – call for big tools.

Oversized bolts and tools, flatbed trailers and the silos themselves – 105 feet tall – took up plenty of space at the construction site. The crane, a 600-ton-capacity beast, erected the storage silos. One smaller silo was previously erected.

Along with the three storage silos at NCS, four silos were erected at North Omaha Station (NOS). The cost of the entire project is $35 million.

The silos are part of OPPD’s compliance with the Mercury and Air Toxics Standards (MATS) rule for 2016. The silos will hold the dry sorbent and the activated carbon that will be injected into the plant’s flue gas streams.

For the dry sorbent, a powdered sodium, either sodium bicarbonate (baking soda) or Trona, is injected. It chemically reacts with acid gasses present in the flue gas, creating particles that are removed by the plant’s electrostatic precipitator.

For the activated carbon, mercury binds to the surface of the injected powdered carbon. It is then removed by the electrostatic precipitator. Testing done at both plants has confirmed the injection process will reduce acid gases and mercury emissions below the limits established by the Boiler MATS rule.

Bryan Lorence, lead environmental specialist and a member of OPPD’s MATS committee, said OPPD employees will continue to maintain and monitor the systems. The monitoring will ensure the systems are in compliance even after the initial testing.