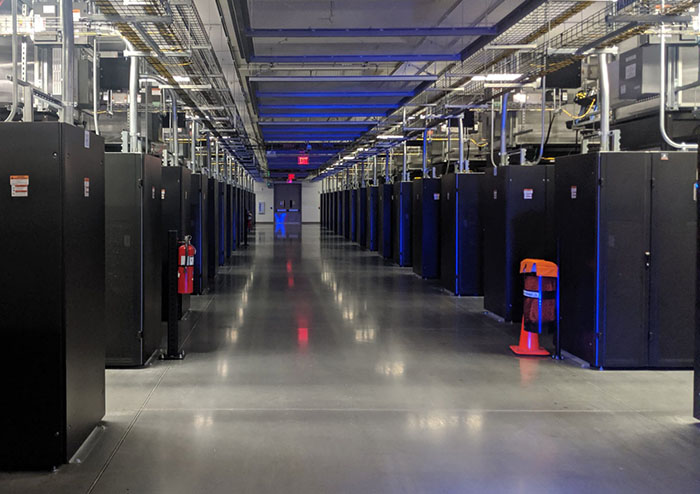 Nearly two years after announcing its plans to come to Papillion, Facebook’s newest data center is live, online, and serving social media traffic. If you’re posting your status, sharing an Instagram photo or sending a message on What’s App, your data may very well be funneled through the facility on Highway 50, between Schram Road and Highway 370.

During a grand opening event June 13, Nebraska Gov. Pete Ricketts said, “OPPD was really the linchpin in helping make this deal happen, because they were able to offer Facebook 100% renewable energy.”

OPPD’s worked with Facebook to develop Rate 261M, which gives large customers flexibility in how they meet their energy goals.

“OPPD has been a tremendous partner to us,” said Rachel Peterson, vice president of Infrastructure for Facebook, who traveled to Papillion from the company’s Menlo Park, Calif., headquarters for the grand opening.

“We really relied on them for this partnership to make this project a reality.”

OPPD President & CEO Tim Burke said “We have a great working relationship with Facebook, working with them on our green tariff rate, which has been recognized across the world.”

The company is partnering with the Papillion-La Vista Schools Foundation to invest in science, technology, engineering and math (STEM) education at the high-school level. The company’s skilled and technical trades program will build on the school’s existing STEM education to benefit more than 1,000 students the first year alone.

“This fall, we will also launch our Community Action Grants program,” said Melanie Roe, a Facebook spokeswoman. “This program provides funding to schools and qualified organizations who support innovative projects and programs including those improving STEM education.”

The governor applauded Facebook’s investment not just in Nebraska, but in its people.

“When Facebook invests here and starts creating these jobs, it helps people to really say, hey, I want to get into that field,” Ricketts said. “So we’re developing these young people to take these jobs that Facebook has available.”

He added, “This really does tell people, Nebraska’s a great place to invest.”

Burke said more companies have inquired about OPPD’s Rate 261M. He expects customers will be hearing about more investment announcements in the future.

As for Facebook, Burke said, “This is a great company that every community, every utility, wants to have in their service territory. They’re community-minded. They truly live out OPPD’s core values – passion to serve. They honor their communities. And they really care for each other.”