Woodworth found his dream job up on the lines 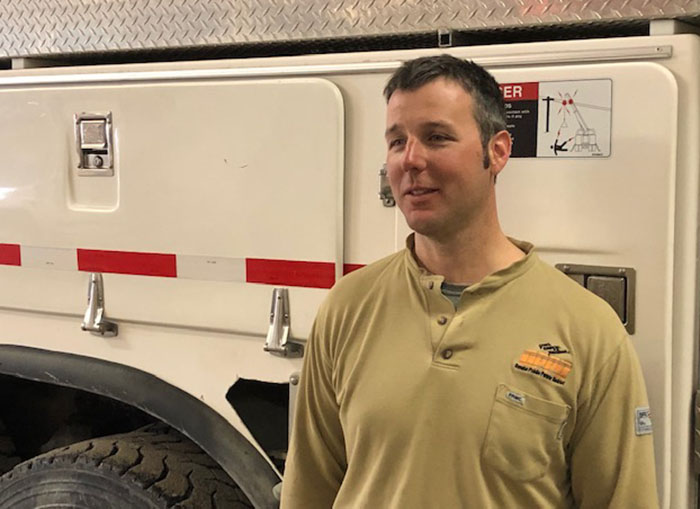 Ralston native Cody Woodworth found his dream job at 22 years old. Woodworth knew he would be an electrician.

His plans changed a little once he learned what linemen do.

Everything about the job appealed to him – being outside, heights, working with his hands and mind. The more research he did – including meeting some actual linemen – the more sure he was.

And being from the area, Woodworth knew OPPD was where he wanted to work.

“I went to line school at Northeast Community College and got a summer internship at OPPD,” he said. “But after graduating, I had to go work for another company (Municipal Light & Water in North Platte). But I never lost sight of wanting to come back and work for OPPD.”

A year-and-a-half later, Woodworth landed the job. He hasn’t looked back ever since.

“For me, it was an easy choice,” Woodworth said. “I love heights, I love electricity and I love helping people. You get so much satisfaction from doing this job. There’s times that the job looks impossible, but working together with your crew, you find a way to get it done. That’s a pretty good feeling.”

Woodworth said being a lineman means he uses his skills to help people in need day or night. He said people may not realize it, but the maintenance Woodworth and his fellow linemen do helps keep OPPD’s system strong and safe.

But being a lineman also means he’s called out when there are power outages, regardless of the time. It also means working in normal conditions and in some of the worst conditions imaginable.

Woodworth has been called away to work every holiday in his 13-year career. One holiday in particular stuck out to him.

“There was a Thanksgiving where we got a call that three-phase pole with a transformer bank on it broke,” he said. “The pole was at a business hosting a large Thanksgiving party. We talked to the customer and found a way to hold the pole until the party was over so they didn’t have to cancel. Once it was done, we changed the pole and rebuilt the transformer bank.”

Woodworth said there are a lot of different causes for outages – storms, car crashes, equipment failure – but no matter the cause, linemen like Woodworth are on it.

“This is a challenging career, both mentally and physically,” Woodworth said. “It takes a lot to learn this job. And even after you think you have it mastered, there is still more to learn. You still run into something you’ve never seen before. No matter the day or time, as a lineman you have to be willing to leave your family to help someone in need that you’ve probably never met before. But they need your help to get their lights back on.”