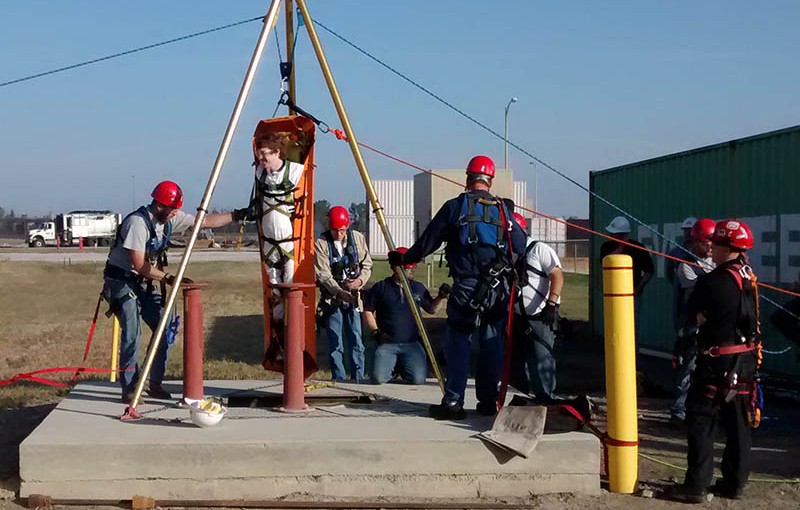 Chris Romaire has paid attention to the construction going on at Nebraska City Station (NCS).

Storage silos and other large-scale projects are underway, much of it to comply with upcoming emissions standards. But Romaire, a shift supervisor and member of the station’s fire brigade, saw another hazard to add to the long list of potential dangers at the large electrical plant.

With those dangers in mind, Romaire and others involved with the plant’s training scenarios knew the topic for the next drill.

“Confined spaces,” he said. “We have a lot of areas where someone could get into a situation. There has been more vault and confined space atmospheres in the last six months, so I thought this would be a great drill to have.”

At 8:32 a.m. the plant alert sounded. Shift supervisor Dan Graalfs was notified on an “event.”

A minute later, Aaron Madsen, the station’s rope rescue captain, was notified and by 8:36 a.m., the rescue team was on the scene assessing the situation. The “event” was a scenario where an employee, David Varner, had fallen off a ladder in a pipe vault, trapping him in a manhole with a possible broken leg. 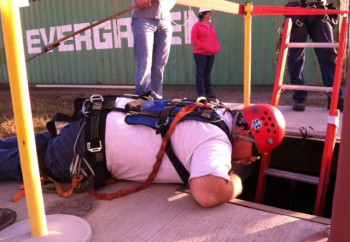 The rescue team made first contact with Varner six minutes after the alert went out. By 9:04 a.m., Varner was out of the vault and in a rescue squad.

The drill was successful based on several factors, including the time it takes to reach and rescue the victim. Romaire and several others, including instructors from Roco Rescue, a group that specializes in confined space and rope rescues and helped train the OPPD teams, served as evaluators.

“From a rescue standpoint, everything went great,” said Aaron Madsen, senior production operations engineer and leader of the NCS rescue team. “There are always a few things to work on, but the coordination among team members was great. We have three new members who got a lot of experience during the drill, but overall the team is pretty seasoned.”

Madsen and Romaire said the team worked well together and learned a lot from the drill. 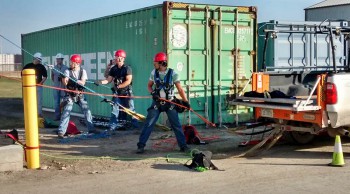 “I knew what to look for from my years on the team,” Romaire said. “It was like clockwork. The communication was extraordinary. Everyone knew their job, no one left their post to tell someone else how to do their job.”

formed out of necessity

The NCS plant formed the rope rescue team about 20 years ago due to the plant’s isolation and distance from Nebraska City. The nearest rope rescue team is an hour away from the plant. By the time they mobilize, get briefed on the situation and begin the rescue, it could be two hours. That’s too long for someone suspended or trapped in a bad atmosphere, Madsen said.

The need is real, Madsen said, and so is the training.

“We practice everything from knot tying to patient packaging to situational awareness,” said Jeremy Kellner, senior I/C technician at North Omaha Station and leader of that plant’s rope rescue team. Kellner came to NCS to help evaluate the drill. “The repetition of scenarios is really important.”