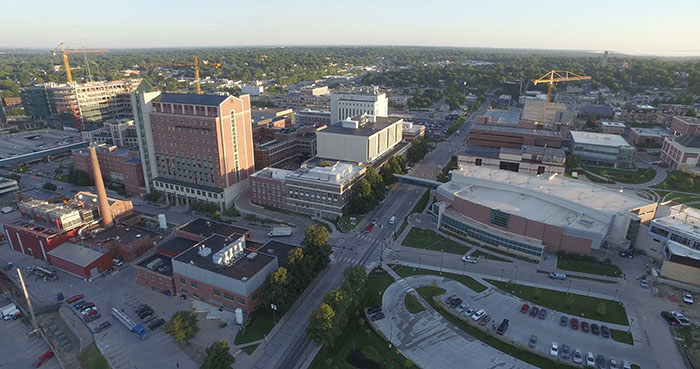 Ken Hansen had just left a nearly-three-decade career with the only company he’d ever known. He took early retirement from OPPD to become vice-chancellor of facilities at the University of Nebraska Medical Center and Nebraska Medicine.

The coming years would transform the campus in the heart of Omaha. But there was a lot of work ahead. The biggest and first hurdle was to secure funding.

The pitch? A quote from a popular baseball movie.

“If you build it, they will come.” That’s what former chancellor Harold M. Mauer, M.D. told the Board of Regents in November 2005, just weeks after Hansen came aboard.

“I thought I gave up a 29-year career to ‘build it and they will come’?” Hansen said.

The pitch worked. “After the holidays I got a call from Chancellor Mauer and was told we have full funding and we’ve raised $10 million more than the goal. He said ‘how soon can you get it done?’”

Under Hansen, the university and hospital have increased their size by more than 2-million-square-feet. All of that space is deemed very high energy usage space. The university has also managed to go from 30 megawatts of energy used to 23 megawatts.

By the time Hansen – who had been a division manager who worked on finding energy solutions for commercial and industrial customers of OPPD – retires, the entire campus will consist of either new or completely renovated buildings.

“I think that is a huge accomplishment in a decade-and-a-half,” Hansen said.

The campus was using nearly 30 megawatts of electricity in 2005, today, even with an additional 2-million-square-feet of space, the campus is at 23 MW.

In 2009, Hansen said $800,000 in energy grants were secured, with helps from OPPD. Those funds went into $5 million in upgrades that made up the first project in the first phase targeting upgrades for the 13 least efficient buildings on campus.

From that point on, the money saved paid for more energy efficiency upgrades. A practice that continues to this day.

Plans for a third energy plant on campus have been put off due to new technologies and modifications, many of which were possible through federal stimulus funding and local philanthropists.

Doing so saves the hospital and university $40 million in capital bonds and $400,000 a year in operating expenses for a new energy plant, Hansen said.

The next phase will involve lighting, which Hansen called “low-hanging fruit.”

“Up front, we looked at the hardest things to do that we would need money for,” Hansen said. “My original projection was we could reduce load on campus by 25 percent both in demand and usage. We hit 25.6 percent in 2015, which we achieved. I left lighting out of the picture because I knew we could get 8 or 9 percent out of lighting.”

All new campus buildings have up-to-date LED lighting and lighting controls, Hansen said. Now, the remaining buildings will get those same features.

And the college and hospital aren’t resting on their laurels. They have drastically adjusted their goal to become net carbon neutral by 2030. That previous goal was 2050. A goal to reduce waste to zero has also been set for 2030.

Hansen said they also want to make similar changes at other clinics and facilities at locations outside of the main campus.

“Those are aggressive goals,” Hansen said. “But the input we’ve received, from faculty and students, from staff and patients, is that it is very important for us to continue down this path.”