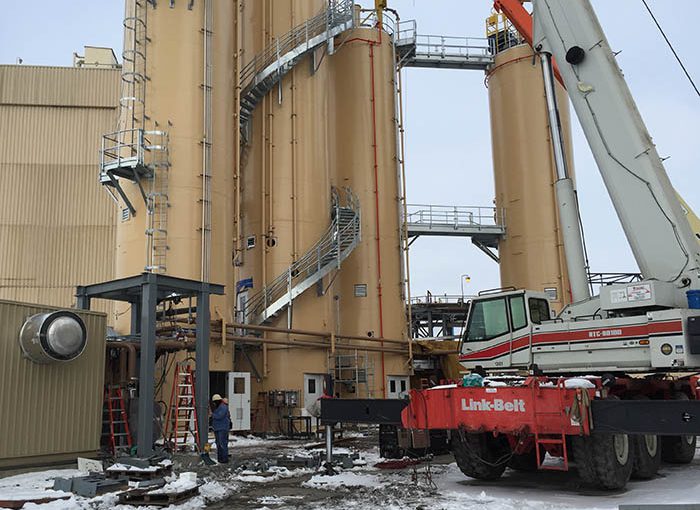 For years, a good portion of OPPD fly ash from the utility’s North Omaha and Nebraska City power plants was sold rather than being disposed of in landfills located at the generating stations.

But with 2016’s Mercury and Air Toxics Standards (MATS) rule, there was concern on the marketability of the fly ash due to planned chemical injection into the flue gas that could modify the fly ash properties.

what is fly ash

Fly ash is a naturally occurring byproduct of the coal combustion process. It has the consistency of volcanic ash and adds strength and longevity when mixed with materials to make cement.

Concrete made with fly ash can handle greater loads, is more resilient and lasts longer, while withstanding harsher service environments than straight Portland cement concrete. It also flows better, has a delayed setting time and is less permeable.

“It was a challenge to keep the fly ash saleable,” said Ernie Parra, fuels supply manager of coal. “But we have new systems to treat the ash and we are essentially selling it for the same uses.”

Parra formed a fly ash team that worked hard to evaluate options and find a way to recapture fly ash marketability. The result was that in 2016, OPPD has contracted with Headwaters Resources to market fly ash, a partnership that has increased the use of fly ash this past year. New technologies offered by Headwaters were a key factor in the change.

Headwaters uses a process called RestoreAir to treat the ash before it can be used in ready mix concrete.

OPPD officials have pointed out the teamwork between the utility and the vendor as benefitting both companies as well as the environment.

Headwaters’ has opened up new markets available to OPPD in Iowa and Kansas by transferring ash to off-site storage facilities. It was previously only stored on site and sold in Nebraska.

Parra said about 50 percent of the fly ash at NOS is being used for ready mix concrete. The rest is used for various soil stabilization projects.

The fly ash from NCS is used mostly for soil stabilization, with a smaller portion used for concrete.

Parra said the disposal of fly ash after the injection process posed a “definite concern” that all the fly ash would end up in landfills, an expensive proposition. All of NCS Unit 2’s fly ash and 30 percent of the fly ash from NCS Unit 1 is disposed of in on-site landfills at a significant cost.

However, OPPD has brought in more than $1 million in 2017 from fly ash sales, Parra said, making it a valuable revenue stream.

This is an increase of nearly $500,000 compared to the previous ash marketer, who operated without MATS restrictions. Nearly all of the fly ash from NOS is used and 70 percent of the fly ash at NCS Unit 1 is used for beneficial purposes.

None of the fly ash from NCS Unit 2 is currently used due to its high lime content. This is a byproduct of the dry scrubber system used to reduce sulfur dioxide emissions.

OPPD is working on a lime optimization project to reduce the amount of lime needed to reduce sulfur dioxide emissions, which could save the utility money and open up beneficial uses for that unit’s fly ash.

Parra said OPPD is always looking for more ways to use the fly ash and keep it out of the landfill.

The following infographic shows how coal fly ash can be reused.

Infographic: Plant right to save big

The right landscaping in the right spots can beautify your property and save you money.