OPPD’s cowboy in the sky 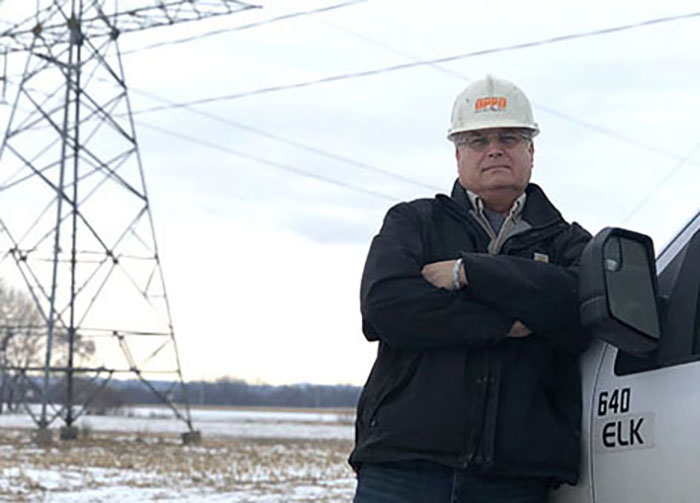 For OPPD’s Gary Wohlman, some days are like a big “Where’s Waldo” puzzle.

Those are the days the utility line maintenance technician rides shotgun in a helicopter near high-voltage power lines.

Wohlman’s job takes him to interesting places and vantage points in search of flaws and potential problems with OPPD’s vast transmission and distribution systems. As one of the utility’s two line maintenance technicians, his job takes him all over OPPD’s 5,000-square-mile service territory.

Not all days are spent in the air though. Wohlman also rolls across eastern Nebraska on an all-terrain vehicle or in a pickup truck inspecting the system from the ground.

He is also a drone pilot. OPPD will be expanding the drone program in the coming years as they phase out the helicopter flights to save money. Technological advances with the drones will allow longer flights and more detailed looks at the system.

In October, Wohlman and fellow line maintenance tech, Mark Gorseth, flew the helicopter along the utility’s 345- and 161-kilovolt lines.

“A lot of our flight plan depends on the wind and heat,” he said. “We could be up anywhere from six to nine hours. When it’s hot, we need to take more breaks. Ideal conditions are overcast days with 15 mph winds. When it’s hot, it is like sitting in a fish bowl on your deck on a hot summer day.”

The overcast days give them the best visibility to inspect the system. On clear days, light refractions can cause the lines to just disappear, he said.

To do the job, you must be familiar with the different structures, designs and standards, Wohlman said. They inspect everything from the structures to the lines, down to the insulators and even the hardware holding everything in place.

“Each person does it their own way,” he said. “The way that works best for me is to treat it like a “Where’s Waldo” game. I scan the whole picture looking at it and even looking through it. Others will look up at the structure and then follow the lines all the way to the next one, looking at each piece.”

What do they commonly find in their inspections? A little of everything, he said. Broken shield wires, broken bells, lightning arrestors used for target practice, even a broken pole. There are many causes for the damage they see, but the most common are weather and aging.

“We have an ever-aging system,” Wohlman said. “It’s important to stay ahead of problems before they get worse and cause bigger issues like a circuit lockout. After we check the system the work gets prioritized.”

Wohlman sees his job as keeping the public and OPPD personnel safe followed closely with keeping the system reliable.

Wohlman started out as a carpenter in his hometown of Hartington, Neb. There wasn’t always enough work in the late 1970s when the economy wasn’t doing well. The local rural electric association was hiring linemen at the time, and he was hired. He hasn’t looked back since.

Wohlman and his wife, Julie, enjoy traveling, camping and spending time with their three children and three grandchildren. The couple own four horses. And it’s horses that take up much of his free time.

“I’m a cowboy at heart, always have been,” he said.

Wohlman grew up working with animals on the family farm so it is something that he has always enjoyed.

“The sport of team roping has got its noose around me,” he said. “I picked it up about 15 years ago and it has become my passion.”

So much so that he now does it competitively. Last year he won the regional roping competition in Larchwood, Iowa, and will compete in the national finals this spring in Arizona. If he wins, he and his teammate will each win $100,000.

“Like my job, it will just be one more challenge. And that’s the fun part.”