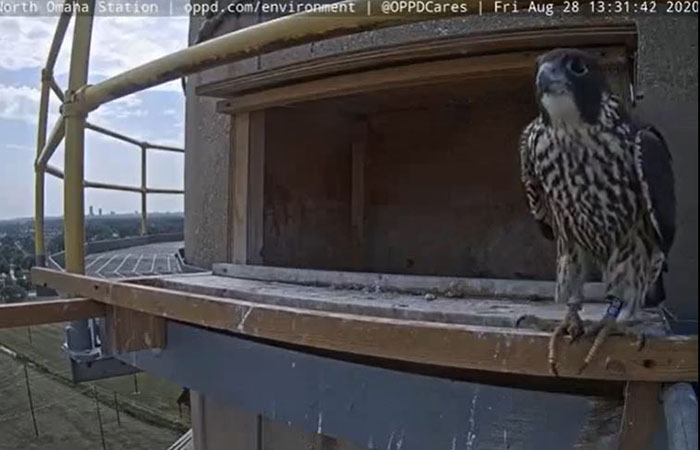 They grow up so fast.

In May, the resident falcon pair, Lewis and Clark, welcomed three chicks to the box high on a stack at the power plant. The two females and one male quickly gained strength and learned to fledge on their own. One of the females, Storm, appears to enjoy living at home.

A Facebook group that follows the offspring of the peregrine falcons living at the state capitol has caught Storm on video and in pictures just hanging out around the box. But Clark, her mother, is not interested in encouraging the behavior.

Several times, when Storm approaches the box, Clark abruptly leaves. Maybe she’s trying to give Storm a hint that she’s a big girl now and ready to be on her own. Maybe she just needs a moment to herself.

It’s been several months since all three offspring have been seen together on the utility’s live webcam. That’s normal. Peregrine falcon young usually leave the nest four to six weeks after they fledge. During this time, they master the art of flying and hone their hunting skills so they can survive on their own.

For now, Storm is perfectly happy hanging out with mom. But from the looks of things, Clark may be using some tough love to get her to be on her own.

Help make a green difference in your community

OPPD's Greener Together Program gives you the opportunity to be involved with implementing grassroots, community-wide environmental projects throughout the greater Omaha area.