Brett Thiemann was a defensive tackle for Bellevue West High School with college football aspirations when a back injury ended his playing days. A career fair at his school and meeting with an OPPD line technician put Thiemann on a different path.

Now he and a handful of others are new OPPD employees. They were hired through the utility’s boot camps, which bring in new workers. The utility held several boot camps in June, which added two cable splicers, two street lighters and a meter technician.

For OPPD, boot camps have become the preferred way for the utility to hire Transmission & Distribution personnel. The camps amount to a tryout for a few open positions and a chance for supervisors to see the workers performing their craft.

“It’s one thing to hear them answer interview questions, but it’s so much more enlightening to see them out there turning wrenches,” said Jerry Webster, field supervisor at the Elkhorn Center.

“It’s so valuable to see their craftsmanship and their attitude and how they interact with their peers and their supervisors,” Robinson said. “We get to see if they are comfortable asking questions, and are they doing the work safely, are they staying out of danger? It gives you a different aspect of how they can perform.”

This was Robinson’s second boot camp and he appreciates the benefits.

Webster said it’s valuable to see firsthand the applicants doing the same tasks they will do in the field: climb poles, work with tools, change fixtures and pull service wires. 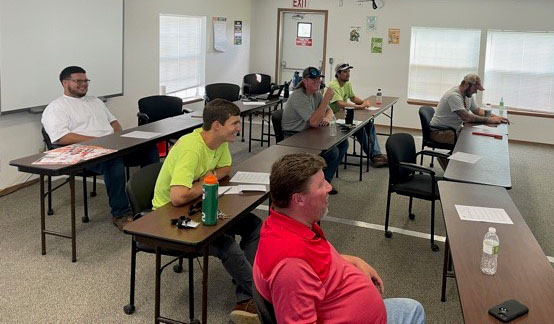 For the applicants, it isn’t easy, but they also see the benefits to the in-person “tryouts” they go through in the camps.

“It was a little more pressure than your everyday interview and you are going face to face with guys who want your job,” said Ryan Shipley, a new cable splicer. “I interned here for a summer as a lineman and knew I wanted to get back here as soon as I could. I knew all about OPPD’s culture, especially their safety record, and new this was where I wanted to be. It’s always been a goal to make it back here, and now I’ve done it.”

Miguel Rojas, a new street lighter, also interned at OPPD. He participated in the utility’s Legacy I3 program and was immediately drawn to the culture at OPPD.

“Getting back here was always my goal, too,” Rojas said. “Now I’m back. This is life-changing for me.”

Thiemann, also a new cable splicer, said getting the call that told him he was selected was a great feeling.

“I’m ready to get to work,” he said. “It feels really good knowing a lot of people are looking out for me and that safety here is held to the highest standards.”