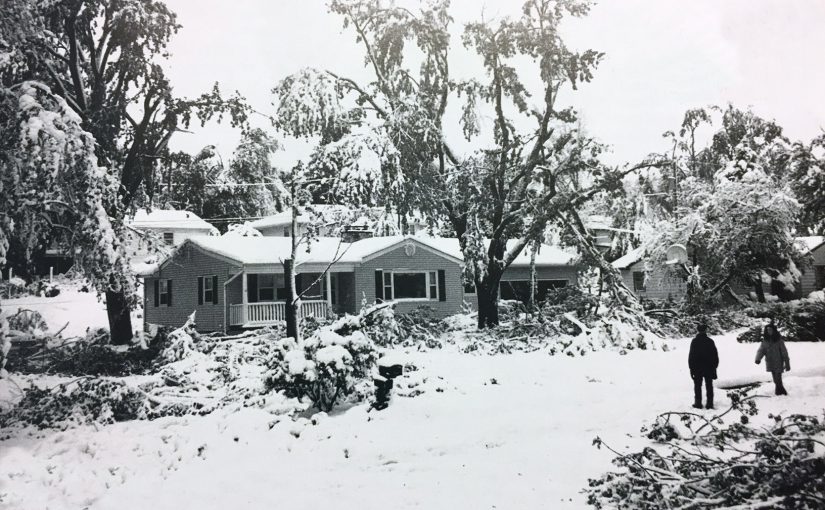 It’s difficult to sleep when you are nine months pregnant, but it wasn’t a contraction or uneasiness that awakened me that October 1997 night.

Instead, it was the loud thuds of something crashing to the ground outside.

I immediately woke my husband and ran to the window to see large chucks of our established maple trees falling to the ground from the weight of the thick, white snow that was falling.

Soon after, I grabbed our 3-year-old daughter from her bedroom on the south side of our ranch-style home, as one of the tree’s large canopy hung over our bedrooms.

After getting her settled in the living room, my thoughts raced between two things: going into labor and going into work.

About two-thirds of the limbs on our two large maples fell to the ground and three smaller trees fared even worse, completely covering our driveway and littering our front and back yards. It was the same all around our District 66 neighborhood. The trees took down our power lines, and we lost our power.

I worked as a supervisor in OPPD’s Corporate Communications Division, and by the looks of my neighborhood, surely there were going to be many without power and messages to get out to employees and customers.

“What would I do if I went into labor today?” I thought as I realized that not only was our driveway blocked by limbs, but so was the street. I remembered that nurse who lived down the block, but hoped it wouldn’t come to making that call.

As my husband worked outside with the chainsaw, I phoned Gary Williams, then manager of Media Relations, offering to help that Sunday in any way I could, knowing that DJ Clarke, who was the primary media spokesperson at the time, was out of town and he was fighting a nasty virus.

By Monday morning, our office – and many others across the district – were in high, high gear.

Because the 150,000 who lost power were having trouble getting through on the outage phone line, they started to call others they knew at the power company. One co-worker arrived at work in Consumer Relations that morning to find her voice mailbox full: 176 messages recorded.

The phones kept ringing. The two-person media relations team worked exhausting hours, answering hundreds of inquiries from all the local media and many national news organizations. They were available for news shows at 5 a.m. mid-day, 5 p.m., 10 p.m. and anytime in between, as was then OPPD-president Fred Petersen, who quickly became the primary spokesperson for the crisis. The team also facilitated dozens of interviews with other key employees. The Consumer Relations group worked on a host of other customer and community issues.

The rest of us in Corporate Communications did whatever we were asked. We formed a liaison with community leaders, as information-sharing became a necessity. We also worked to produce materials on power restoration and what customers needed to do if their electricity mast was torn off their home, as many were.

At home, our power remained out for seven days. Because we had a young child and were expecting our second any day, we spent four nights at my parents’ Dundee home and three at my mother-in-law’s in south Omaha.

Many people had to make similar decisions when they lost their power, and not knowing how long they were going to be without power was one of the biggest frustrations that customers voiced.

Lots of employees were in the same situation. It wasn’t that we intended to mislead customers, it’s just that this truly was the perfect storm. Many issues came to a head. Nonetheless, the importance of getting them fixed for future storms hit every single one of us in one way or another.

Our son was born on Nov. 5, the very day that OPPD announced it had restored service to all customers who could receive power. Many customers still needed to have a private electrician repair the equipment that got ripped from their house, before OPPD could restore its equipment.

From the hospital bed that night, I watched a news account still criticizing OPPD’s efforts. While I understood the public’s frustration, the storm’s wrath was enormous and I had witnessed lots of valiant efforts all across the utility. I still see that every day I come to work.

These memories and lessons we learned in ’97 still factor into our work because the company-wide effort was simply too big to forget.

Since that storm, we’ve been accessible around-the-clock to the media.

In recent years, we’ve been able to leverage technology and other tools that weren’t around two decades ago. 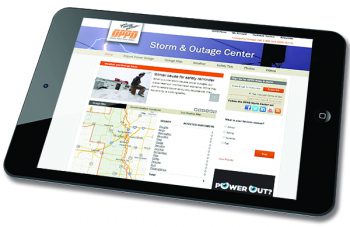 This includes a robust social media program and our own news site, The Wire, where we share stories about what OPPD and the industry are doing.

In addition, our Storm & Outage Center that debuted in January 2015 falls into that category, too. Memories of that ’97 storm’s aftermath played in the back of our minds as we developed this site to improve timeliness and transparency around major storms and outages. This site had over 30,000 users over a 30-hour period following the June 16, 2017, storm, OPPD’s fourth-worst-ever, with 76,500 outages.

No pain, no gain?

That’s true for having a baby and improving a business. We’re all the better for it.