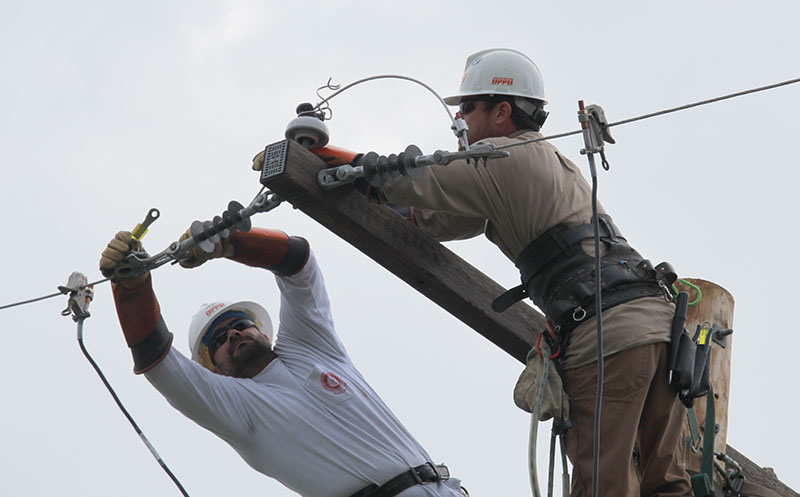 OPPD made a strong showing at the 36th annual International Lineman’s Rodeo.

The speed climb is just that, a fast climb up a power pole. It involves the lineworker carrying a small canvas bag containing an egg up the pole. They must then swap the bag with one placed at the top, put the egg in their mouth and come back down the pole without breaking it. Ghyra’s time was 15.69 seconds. His closest competitor was more than four seconds behind that time.

Below is a video of Ghyra’s climb.

The hurt man rescue event simulates the rescue of an injured worker. The climber climbs the pole, attaches a rope to the injured worker (represented by a dummy), cuts the dummy free and lowers it to the ground.

Lee O’Neal, director of T&D Construction at OPPD, said he believes this is the first time OPPD has had a first-place finish in this event.

“I am extremely proud of the showing that the OPPD teams had,” he said. “The effort and skill that all of the OPPD contestants displayed were outstanding and a real testament to the quality of the linemen we have at OPPD.”

He added that the competition is very tough. Winning one event is incredible, but to win two is a real achievement.

“Ted has worked very hard for this and I could not be happier for him.”

OPPD construction inspector Gary Martin, a former lineman, has been involved in the international event for 20 years. He will soon be promoted from Chief Judge to Master Judge, and dedicates a lot of time and effort to the event, O’Neal said.

Participants in the OPPD teams included:

Photo gallery of the event