OPPD falcons have more chicks on the way 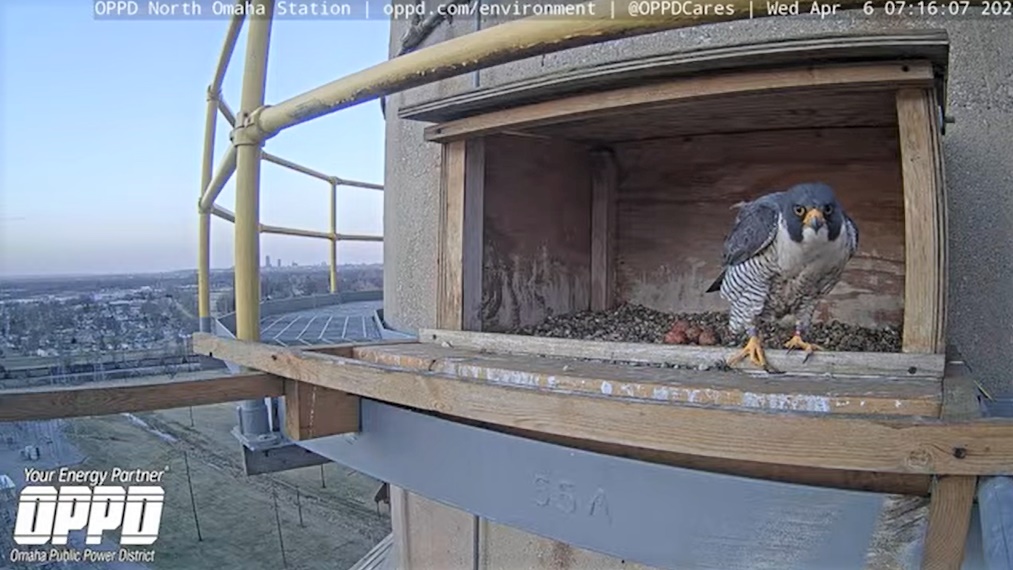 Last week, Clark, the resident female, laid an egg on March 29 in the falcon box. Another egg arrived Friday, and over the weekend, she added a third. On Wednesday morning, a fourth egg was spotted in the nest. Father Lewis has been busy checking on the family and bringing Clark meals.

Observers believe Clark took up permanent residence at the OPPD box in the fall of 2015, eventually settling down with a mate to hatch two chicks. As her name suggests, she was believed to be male when she was banded in Lincoln with her brother (and current mate), Lewis.

The falcon box is full of activity in the spring and summer. Things got started a little early this year when a group of pigeons turned the box into their own little Airbnb for a while.

Typically, new chicks hatch, feed and grow until they finally take their first steps and flights beyond the box. Peregrine falcon eggs take about 33 days to hatch. The birds of prey can lay up to four eggs each year.

Clark and Lewis, born in 2012, continue a large – and long – line of peregrine falcons who originated from a pair that lived at the State Capitol in Lincoln for several years.

A Facebook group is closely following the OPPD falcons, along with new falcons recently spotted at the Capitol, a pair at the WoodmenLife Tower in downtown Omaha, and a pair at an Envergy power plant in Kansas.