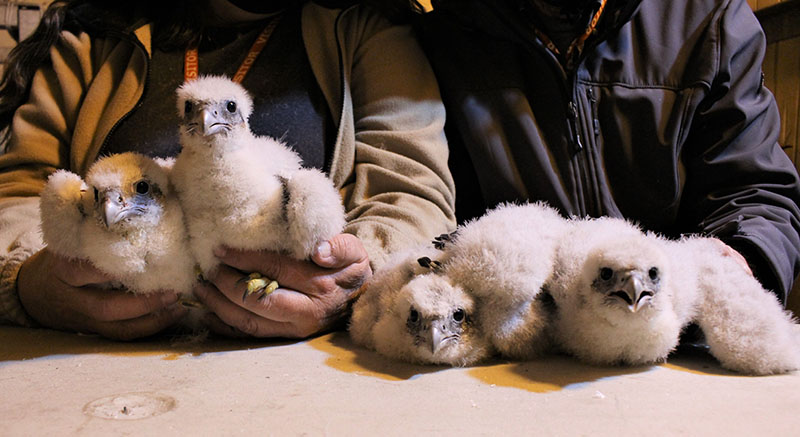 Over the Memorial Day weekend, a licensed handler weighed and banded the chicks with the assistance of plant personnel. Based on weights and measurements, the experts believe three are male and one is female. The four chicks are the latest clutch hatched to Lewis and Clark, the resident pair of adult peregrine falcons who have lived at the NOS box these past several years.

Maneuvering the chicks out of the falcon box and into an enclosed room for banding is a delicate process. The box’s location high on a stack means the work is not for the faint of heart.

And like most parents, Lewis and Clark are protective of their babies. In the video below, you can see them hovering just beyond the railing as the chicks are loaded for transport. Plant personnel and the handler commented that the parents were more aggressive this year than last year.

Peregrine falcon chicks are banded when they are between 22 and 30 days old. At that age, the chicks are the size of an adult, but have not gained their adult, flight feathers. The bands provide valuable information to researchers about survival rates, location and population growth rates.

A band has a unique nine-digit code to help identify the bird in the future.

Several years ago, a band helped identify the mother at NOS, Clark. When handlers banded her as a chick, they believed she was male based on her weight. Weight is one measurement used to determine gender.

It is common for female peregrines to be larger than males. Over time, it became apparent she was a female. She has lived at the OPPD plant for several years now, joined by her sibling, Lewis.

Help us name them

With their new bands, the four falcon chicks now need names to assign to their bands and enter in the falcon registry.

OPPD wants the public’s help in naming the birds. Visit the utility’s Facebook page and vote in the naming contest. The contest will run through June 11. OPPD will then announce the winning names on social media and The Wire.

The chicks are the latest in a long line of peregrine falcons hatched in Nebraska and the Midwest. Check out their “family tree” in the infographic below, and learn some fun falcon facts along the way.