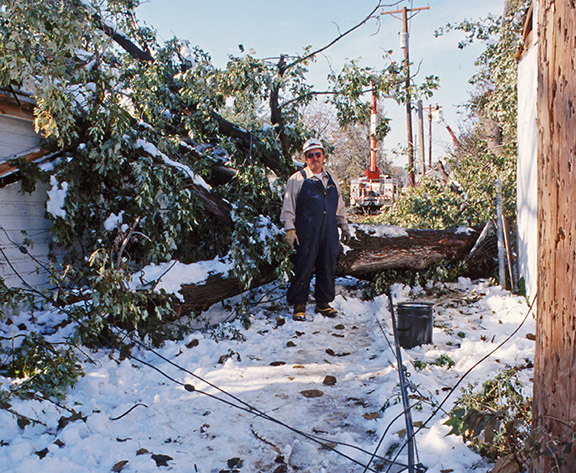 Not even the weather forecasters saw it coming. Leaves had not yet fallen from most trees, so the weight of the fast-falling wet snow caused numerous large limbs to break off trees. The sound of falling limbs awakened those who lived in areas with established trees.

It was, by all accounts, one of the worst snow and ice storms in Omaha’s recorded history.

But it marked a game-changing moment in OPPD’s history, according to Tim Burke, president and CEO.

Burke was an OPPD vice president in 1997, having joined the utility six months earlier. “This storm drove us to change the way we were going to service customers. It made us a better utility,” he said.

By sunrise Oct. 26, 1997, much of the 13 inches of snow that fell overnight had melted into the warm ground. But piles and piles of downed branches served as proof of the storm’s strength.

In Omaha alone, tree damage was estimated at more than $60 million, according to a newspaper account. Wrapped amongst many of the trees were downed power lines, streetlights and other power equipment.

Damage stretched from the Kansas border north into Burt and Washington counties. Across OPPD’s 5,000-square-mile service area, outage estimates were that 150,000 or nearly three-fourths of the utility’s customers were without power. It took $13.9 million to complete OPPD’s restoration, and the utility recovered much of that from federal disaster funds.

One for the record books

The storm tested OPPD’s men and women like no other storm before and few since. It was an exhausting 11 days before power was fully restored, and the longest storm-restoration battle in OPPD history. It ranks as the second-worst storm in terms of outage numbers in OPPD’s 71-year history.

“No previous situation has ever created more widespread and intense pressure on our utility to perform,” said then-OPPD president Fred Petersen in December 1997. “And while I’ve always been a strong supporter of OPPD employees, I don’t remember ever being more proud of our work force than I am today.”

Distribution and streetlight systems bore the brunt of falling branches. At one point, 130 of the 350 primary circuits in the system were out. Crews worked 16-hour days, and tree crews kept exceptionally busy.

The service-restoration effort was hindered by ongoing problems with downed tree branches, which blocked streets and alleys, got tangled up with conductors, and pinned wires and other equipment to the ground.

Although temperatures in the 50s and 60s had melted most of the snow by Halloween, employees continued the storm recovery through Nov. 5, when service was restored to all customers who could receive power. OPPD had to wait to connect service to those who needed a private electrician to repair the equipment got ripped from their house.

At the peak of the effort, OPPD had 800 people working in the field to restore power. This included employees and those from other organizations who came to help with the effort. Overall, OPPD employees alone worked 45,000 hours of overtime during that period.

“It was tough sledding for a while,” said Jerry Krause in 1997. Krause was then division manager of Electric Operations. He noted many customers lost power a second time because weakened tree limbs continued to fall with wind gusts up to 50 mph.

Because the storm was unprecedented, many OPPD systems and procedures showed significant weaknesses. Early estimated restoration times were inaccurate and customer frustration played out in the media.

One of the biggest issues was the inability of OPPD’s phone system to handle the flood of outage calls.

Many customers who initially called received busy signals. OPPD responded by opening additional lines and pulling in as many other employees as possible to take calls. Employees answered more than 120,000 calls and entered 83,743 outages into the trouble call system.

Even so, the phone system registered well over a million busy signals during that 11-day period. As a result, frustrated customers went to the media in the form of calls to radio shows and letters to the editor.

Until that time, 80,000 was the most outages caused by one storm – Halloween of 1991. The ’97 event nearly doubled those outage numbers.

“A team of people gathered that Sunday (Oct. 26, 1997) at the Energy Control Center, where we began to coordinate the work and quickly made adjustments to many of our processes,” Burke said recently.

While employees worked to repair downed lines and answer phones, OPPD’s corporate communicators faced a barrage of media inquiries. The media interest was directly proportional to the size of the storm, according to DJ Clarke, then-supervisor of Media Relations and Advertising.

“At the peak of the outage, 60 calls per day from the media, including every local newspaper, TV and radio station, as well as national outlets: ABC, CBS, CNN, Associated Press and others,” said Clarke in 1997.

OPPD held a press conference Oct. 30, 1997, to relay the extent of damage, acknowledge that early estimates were off, and reassure the public that crews were working as hard as possible.

The media team made itself and key personnel readily accessible to media. At one point, Petersen joked he should be on KFAB’s payroll because he had done so many on-air interviews.

When it was over, the district vowed never again.

OPPD launched a rigorous, uncompromising self-examination to determine how the district could and would do better in the future. The utility hired a public relations firm to conduct a survey of 600 customers in December of 1997. The survey found:

On a positive note, about 95 percent of the customers surveyed said OPPD did a good job overall, aside from the October storm performance.

Nonetheless, OPPD management and employees got right on the to-do list resulting from the storm response.

Learning from the past

“We learn better ways to do things with each storm. They are all different,” Burke said.