Heeding the call for aid 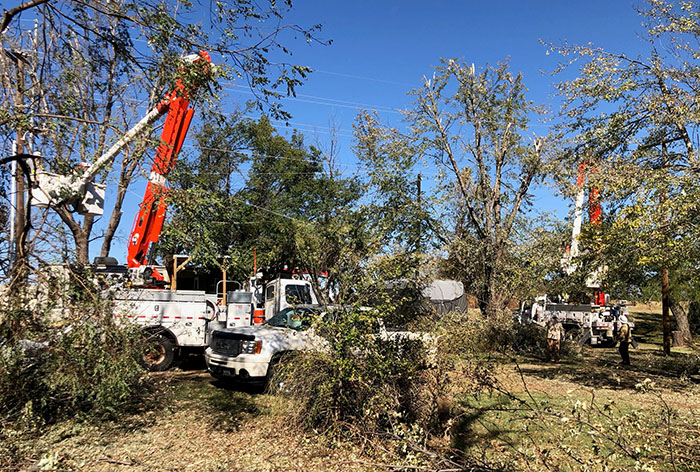 OPPD crews were released from mutual aid duty in Oklahoma to restore power after a damaging ice storm. The crews have been there since late last month and their efforts were praised by officials and customers at Oklahoma Gas & Electric.

“While our crews were in Oklahoma I received calls and e-mails from members of the community in Oklahoma City as well as OG&E personnel thanking us for our help and hard work,” Schiessler said.  “They worked 16 hour shifts for 12 days to help restore power to Oklahoma City and the surrounding communities. Much of  the work was extremely difficult as repairs were made in tight alleys and areas with many downed trees and heavy vegetation.”

OPPD crews reported progress in their Oklahoma restoration efforts following an ice storm that left about 300,000 customers without power statewide. The crews have been working safely and efficiently. Their work has included pole replacement, downed wire and cross arm repairs.

Bill Wunderlich, field supervisor at the Papillion Service Center, said “morale is high and the guy’s are extremely motivated. I couldn’t be more proud, love being part of this team.”

And OPPD’s crews received kudos from some customers as well. The following was from a Crescent, Okla., resident:

“I didn’t know where to direct my comment but wanted to say thank you to all the linemen from OPPD that have come to Oklahoma to help with restoration after the ice storm. I am a ‘line wife’ myself and my husband has been out working since Tuesday the 27th. There is nothing like your lineman going out and working 16-hour days and then have to come home to a house with no power. Your crews were out working by home and I was so excited to drive by and see all their trucks. I understand the sacrifices they make when leaving their state to go help others and leaving their families behind. Anyhow, again, thanks you from an Oklahoma Lineman’s wife!! We appreciate all that you do and for coming to help put us back together!!!!”

OPPD crews continue working to help customers in Oklahoma recover from an ice storm. The crews were working this weekend with an Oklahoma Gas & Electric crew near Crescent, Oklahoma, about 40 miles north of Oklahoma City.

The OPPD crews have been replacing poles in the area, including cross arms damaged in the storm. They are also responding to downed or damaged lines.

OPPD is answering the call to help its fellow utilities.

Thursday morning, 15 employees left Omaha for Oklahoma City, where an ice storm had left hundreds of thousands of customers without power. As of Thursday, nearly 250,000 customers in the city still remained in the dark. Approximately 300,000 were without power statewide.

The outages resulted from an unseasonable ice storm that coated leaves on trees and brought down branches. OPPD will be assisting Oklahoma Gas & Electric. According to reports, the damage to distribution structures is severe due to the mixture of ice and vegetation on the trees.

The severity and individual nature of the repairs means crews could be in Oklahoma through Nov. 8. The duration is also due to a limited number of available crews who could help.

Recent hurricanes battering the Gulf Coast up into the Carolinas has pulled most mutual aid crews to that area. Nearly 2 million customers are without power in that region.

For the Oklahoma storm, a total of six utilities are responding, including OPPD and Nebraska Public Power District (NPPD).

Responding to these types of calls is part of OPPD’s public power promise to help fellow utilities in its mutual aid network. In the past, OPPD has benefited from assistance from other utilities. For example, the tornadoes of June 2017 brought several utilities in from around the country to help the Omaha area regain power.

“This is why they become linemen, to help people and restore power when outages occur,” said Eli Schiessler, manager of OPPD’s Papillion Service Center. “When we say we honor our community, that honor extends beyond our service territory to fellow utilities as well.”

The employees on their way to Oklahoma include one field supervisor, 12 line technicians on four, three-man crews and two transportation mechanics. In addition to manpower, OPPD is also bringing four crew leader trucks, four bucket trucks, four digger derricks and other passenger vehicles. 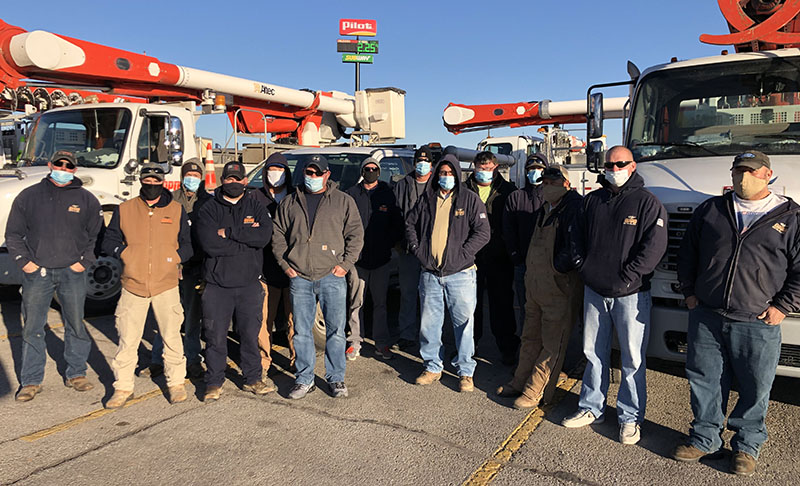 Because of the COVID-19 pandemic, Schiessler said the responding utilities will be doing things a little differently to maintain safety protocols. The Electricity Subsector Coordinating Council (ESCC) issued a resource guide for mutual aid during the pandemic. OPPD and the other utilities will follow those guidelines, which include:

Sanitizers and masks will be available. OPPD crews brought their own, and will use them when appropriate. Due to the nature of their work, sometimes field personnel cannot wear masks and keep physical distance from each other.