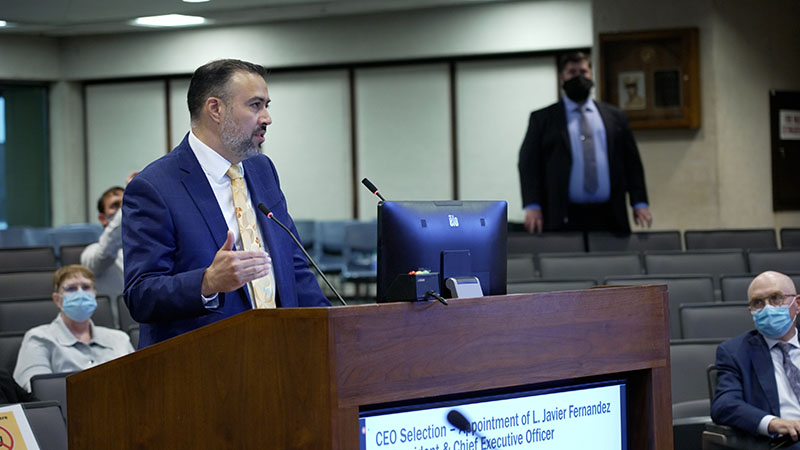 Javier Fernandez, OPPD’s vice president of Finance and Chief Financial Officer said he felt a “calling” to apply for the utility’s top job after Timothy J. Burke announced he would retire in July.

“The biggest thing that drove me was a deep sense of responsibility,” he said. ”I care about this organization because I know the amazing things we’re already doing, the plans we have. And I want to be part of it. I want to lead.”

OPPD’s board of directors selected Fernandez, 46, for the position, out of five internal candidates, during their May board meeting with a unanimous vote.

Fernandez was born and raised in Mexico City, where he earned a bachelor’s degree in Economics from Instituto Tecnológico Autónomo de México (ITAM). He becomes one of only a few Hispanic CEOs now leading large Nebraska companies.

After the vote was cast by the board, Fernandez addressed the board and those tuned into the live feed of the meeting. He thanked Burke for taking a chance and hiring him and for mentoring him.

He then addressed his family — in Spanish — watching from Mexico, thanking them for their love, sacrifice and the education they provided he and his sisters which made it possible for him to be in this position.

He came to OPPD four years ago from the Bonneville Power Administration in Portland, Ore. There he served as chief financial officer before he and his wife, Belinda, decided to make a move. With their children nearing school age, they wanted to find an area with good schools and a good environment in which to raise their family.

Fernandez and his wife have four children – 10, 7, 5, and 1 ½. Along with schools and a good neighborhood, proximity to their church also played an important part in their decision to move to the Midwest. Fernandez said they have found a great community to belong to, including their OPPD “family.”

“It’s a group of dedicated individuals who genuinely care for one another,” he said. “It has been a great, great experience. Professionally, it has also been intellectually challenging. I get to work every day on complicated systems and complex issues. And that’s exciting.”

During his time with OPPD, Fernandez has guided the utility through more than  financial matters. He helped lead the utility’s response to historic flooding in 2019, when the utility’s Business Continuity Plan was activated. He did so again during the COVID-19 pandemic, putting his crisis leadership skills on display for many in the organization to see.

“His extensive experience, passion, and commitment will serve our customers and our communities well,” said Board Chair Amanda Bogner.

Fernandez said he’s “honored and humbled” to be chosen as OPPD’s next leader. Many in the OPPD work force – past and present – are excited to see him build on the work Burke has done during his six years leading the utility.

Fernandez plans on continuing work on such large-scale inititiaves like Power with Purposse, Pathways to Decarbonization and others that began under Burke.

Prior to Fernandez’s selection, OPPD conducted a stakeholder outreach effort in which the utility asked employees, customers, and community leaders what they would like to see in OPPD’s next CEO. The board asked for that input during its March meeting. They received more than 1,000 comments via OPPDCommunityConnect.com and OPPD.com.

“They told us they were looking for a credible, proven, forward-thinking leader with excellent communication skills and a passion for the communities OPPD serves,” said Craig Moody, the board’s Governance Committee chair and past chair of the board.

The utility held an online meet and greet May 10 to give customers an opportunity to meet Fernandez.

“Make sure that we’re caring for our people,” he said. “The work our line crews do, it’s dangerous … and the work our people do in plants – getting out on scaffolding and in boilers, it’s risky … So, we need to keep a focus on safety.”

Mental health, he said, has become even more important in light of COVID-19 with about half of OPPD’s employees working from home. Some may feel isolation in some situations, so it is important to offer resources to help them deal with that, he said.

Burke, who became emotional at the board meeting, spoke directly to Fernandez: “You are special. We knew that right away and knew that you matched our core values. You will all see him as an amazing leader and a special person. I know OPPD is in good hands.”

Fernandez looks forward to growing his knowledge in this ever-changing industry.

“I don’t think you ever stop learning about this industry,” he said “It is so complex. I’m fortunate in that I have an amazing team of senior management leaders and about 1800 women and men that come in day in and day out that give their very best to keep the lights on to serve our customer-owners.”