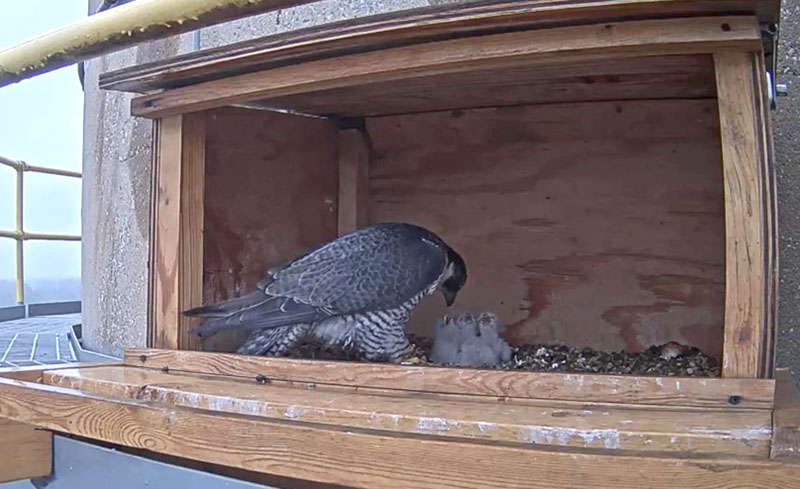 A little over one month ago, Clark, the resident female, laid four eggs in the falcon box atop a stack at the North Omaha power plant. Father Lewis has been in and out to check on the family, occasionally relieving Clark of her duties so she can hunt for food. Observers believe Clark took up permanent residence at the OPPD box in the fall of 2015, eventually settling down with a mate to hatch two chicks.

There was some confusion in 2020 when Clark began to lay her eggs. Because, as her name implies, she was believed to be male when she was banded in Lincoln with her brother, Lewis. Yes, Lewis is both Clark’s brother and mate.

That year, the pair raised three chicks, which were banded before they fully fledged from the nest. OPPD held a naming contest for the trio and plans to do the same with the latest clutch of chicks.

Clark and Lewis are busy providing food for the growing chicks, so watch the utility’s live webcam to stay up-to-date on all the action. The babies are commonly fed in the early morning, which is a good time to get a look at their fuzzy heads. The camera is part of a new falcon box installed in 2019.

Spring and summer are busy times in the box. New chicks hatch, feed and grow until they finally take their first steps and flights beyond the box. Peregrine falcon eggs take approximately 33 days to hatch and the birds of prey can lay up to four eggs each year.

Clark and Lewis, born in 2012, continue a large – and long – line of peregrine falcons originating from a pair who lived at the state capitol in Lincoln. The parents were together from 2005 until 2020.

Earlier this year, the female, known as Mama, was found injured near the side of a road. She is now in a raptor recovery center where she will live out her days. Enthusiasts believe the male, advanced in age for a peregrine, is deceased.

This spring, however, a young peregrine falcon has shown interest in the capitol’s falcon box. A new lineage may emerge in the years to come.

The original Lincoln falcons have three groups of “grandchicks.” In addition to the pair at OPPD, another pair lives at the Woodmen Tower in downtown Omaha, and a third pair lives at an Envergy power plant in Kansas.

A Facebook group is closely following the activity of the capitol box as well as all of their offspring.