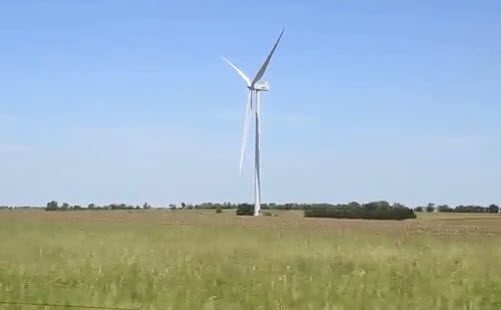 While the white turbines stood tall in the distance, a crowd gathered to celebrate the progress of what will be Nebraska’s largest wind farm.

Grande Prairie wind farm in Holt County is bustling with activity. Hundreds of workers are on site not only erecting the ubiquitous wind turbines, but also the substations and transmission structures that will support its power generation.

Omaha Public Power District will purchase 100 percent of the 400 megawatts generated by the wind farm. That brings the utility closer to its goal of having 30 percent of its generation come from renewables by 2018.

Those gathered at the event, a majority of whom were landowners, saw crews “fly in” turbine blades on one of the 200 towers in the distance.

Alicia Knapp, project manager at Grande Prairie for BHE Renewables, said this is the busiest time at the site. Crews erected as many as two wind turbines a day.

“This is the exciting part,” she said. “When (the landowners) can see the turbines go up across the landscape.”

Grande Prairie spreads across 45,000 acres of farmland in the northeast Nebraska county. Most of the turbines are located in the corners of fields, taking up less than one-half of an acre. 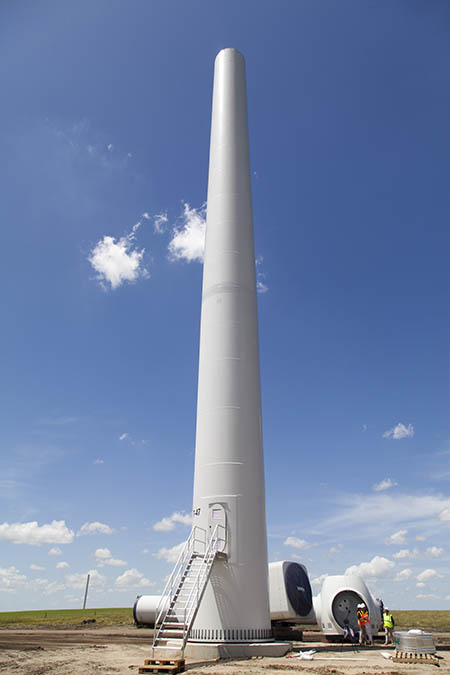 Up close, the wind turbines are both imposing and impressive. They stand 262 feet tall from the ground to the center of the nacelle, where the blades connect. The nacelle, which is the size of a school bus, also houses the turbine that generates energy. The wind turbines at Grande Prairie are manufactured by Vestas, from their facility located in Colorado.

Teams of workers move from turbine to turbine, erecting the towers. Other crews come behind them later to install the nacelle and blades. All the while, semis loaded with the large-scale equipment rumble along the county roads nearby. Most equipment comes via railway to nearby O’Neill or Norfolk, then trucked to the site.

With so many people, vehicles and equipment around the site at the same time it may seem chaotic. Instead, it appeared choreographed. Everyone knew their place at any given time and moved in sync with one another. 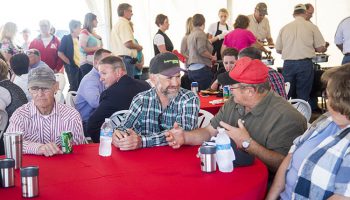 Local landowners and public officials have been very involved in the building of the wind farm, with the county roads superintendent and a county supervisor attending weekly construction update meetings.

For Holt County Board Chairman Bill Tielke, the Grande Prairie wind farm is the next major advancement in the landscape of the area. First came barbed wire, then irrigation and now wind turbines.

By the summer of 2017, all 200 turbines will be generating power for OPPD customers – and economic development opportunity for the Holt County area.