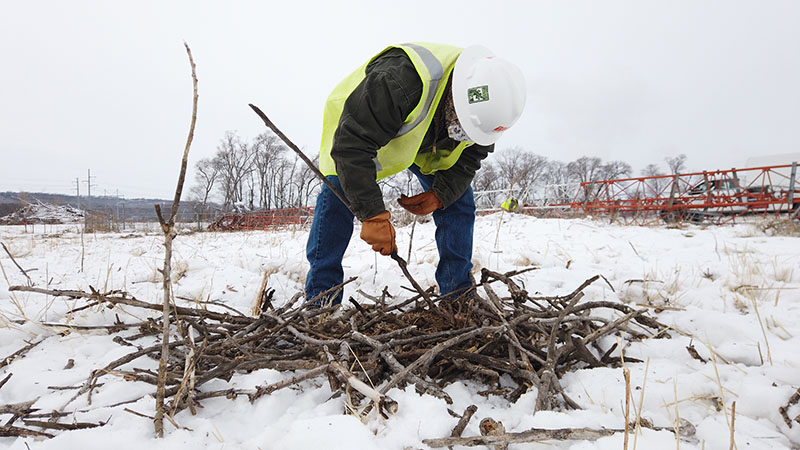 When these big birds return home from their southern winter retreat, they will join their feathered relatives at OPPD’s North Omaha Station (NOS) as being prime-time stars.

Plans are in the works for another web cam on OPPD property, this time to catch the comings and goings of some osprey who have made at home Fort Calhoun Station (FCS).

Ospreys are protected by the U.S. Migratory Bird Treaty Act, but they are no longer listed as a “Species of Special Concern.” The large raptors are still included in Imperiled Species Management Plan.

That designation means they have certain protections and must be treated with care. The osprey’s nested on top of a 360-foot meteorological tower at FCS.

As part of the decommissioning efforts at FCS, personnel removed the meteorological tower on Dec. 14. At that time, they formulated a plan to replace the nest site. The plan must meet both state and federal regulations regarding protected species like the osprey.

A new osprey home will likely be a 60-foot tower. The previous nest will relocate to the new tower, said Patrick Finigan, water and natural resource program administrator in OPPD’s department of Environmental and Regulatory Affairs.

“Osprey populations are a lot more sparse than they used to be around here,” Finigan said. “They are classified as a large raptor, similar in size to the bald eagle.”

Since ospreys are migratory birds, OPPD had time to replace the nest, Finigan said. Their migratory season runs from September to March.

OPPD is partnering with U.S. Fish and Wildlife Service and Nebraska Game and Parks Commission on the plan. The utility will erect a new tower to host the nest near the site of the previous tower, Finigan said.

And much like the falcon nest at OPPD’s North Omaha Station, the osprey nest will be have its own webcam.

“This is about giving back to the environment, being good stewards of the land,” Finigan said. “This is a cross-collaborative effort through all of OPPD’s resources – FCS staff, transmission engineering, data transport services, electrical communications, economic development and land rights. A lot of individuals had insight and input to make sure these animals survive and thrive.”