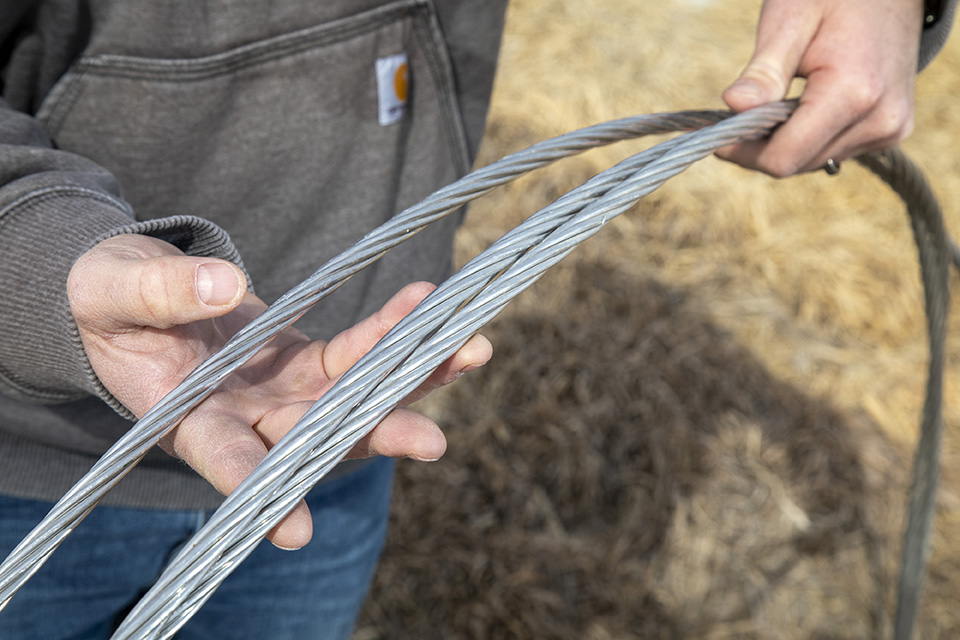 Galloping lines – you may have heard that term used in connection with a power outage, but what are they and how do they impact your power during a snow storm? And what is your utility doing to protect your power supply?

The term galloping lines refers to what happens to power lines coated with moisture when they freeze. The water freezes into a teardrop or wing shape, making the line more aerodynamic, which can be a big problem when winter storm winds kick up.

The ice-coated lines start moving back and forth or up and down as winds increase. And that’s when power outages can occur.

While this typically happens in rural areas where the lines are exposed to more open terrain and less tree and building cover, it can happen in the metro area too.

The lines can collide with each other causing the lines to “trip out” and become de-energized. Or they can snap cross arms, the structures on right angles fastened near the top of the power pole. Cross arms support the conductors, distribution transformers, isolating links, fuses and other important  equipment to keep the power flowing.

OPPD and other utilities look at different ways to mitigate galloping lines during snowstorms. There may be a time where technology – in the form of specially coated lines – provide the answer, but that isn’t available now.

Over the last few years OPPD has had some success with the problem by installing air-flow spoilers in some areas where lines have been prone to galloping. Air-flow spoilers are rigid thermal plastic coils that wrap around sections of transmission and distribution lines to offset galloping.

Now OPPD is installing a new type of power line in some locations to help minimize outages caused by galloping. After seeing other utilities using “twisted pair” cabling, or T2 conductors, field workers asked about piloting such lines at OPPD.

The answer was yes. And in the limited time they’ve been used by OPPD, they’re working well, said Mike Herzog, manager of Distribution Planning.

Herzog said OPPD is always looking for ways to “harden” the system. When multiple field personnel across the utility brought up T2 wires, the utility was already identifying places that would be candidates for trying out the new wires.

“Most of the projects were multiple miles, where we were either replacing older single-phase conductors or building new, or creating new strong ties in the distribution system to increase our resiliency in the areas,” Herzog said.

One notable area was a line rebuild near Arlington, Nebraska. A stretch of heavy three-phase lines there  had been subject to galloping. The lines had been knocked to the ground several times during bad weather, he said.

The configuration of T2 wires helps to prevent ice buildup and galloping.

“With two conductors twisted together, the cross-section is constantly changing and that wing shape never develops,” said OPPD senior engineer Seth McClintock. “There isn’t any lift to the wire, and therefore, no galloping.”

McClintock said some movement between the conductors can “slough off” some ice, depending on how quickly it’s building up.

He said OPPD is considering expanding the use of T2 wires. Among the options are possibly making them the standard line to use in rural areas, or using them just in spots with a history of galloping lines.

But the lines are more expensive than standard lines, McClintock said. They can also take longer to repair when there are problems. And there is the availability factor.

“When the project started a couple years ago, the wire was in stock at the distributor,” McClintock said. “At most, we were looking at a six- to eight-week wait if they happened to be out. Now, we are seeing lead times of over a year to get wire in. We’d need to be able to get wire in to do the projects and have appropriate spare material on hand.”

But the results are are promising enough that expanding the use of the wires is under consideration and more study. Reliability and system resiliency are two of OPPD’s highest priorities, and the utility will continue to find new ways to support both priorities.