Look back at OPPD’s role in West Dodge Expressway 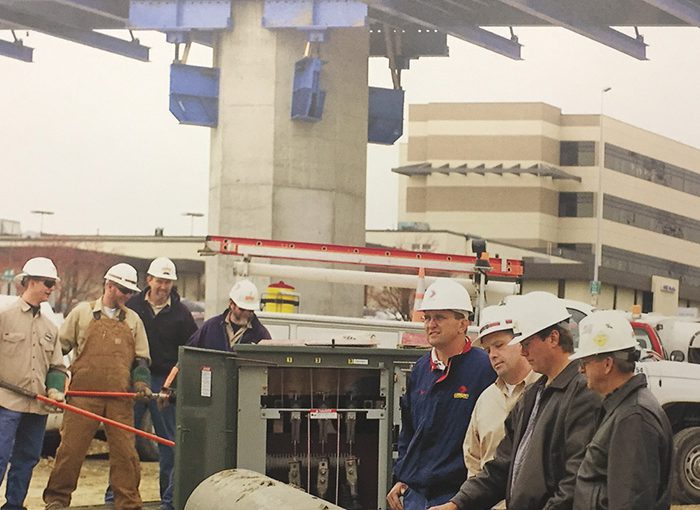 Motorists traveling across the West Dodge Expressway might not realize just what went into its construction or that OPPD had a big role in making the elevated structure a reality.

In 1997, OPPD personnel became involved with HDR Inc. in the design implementation phase. HDR served as the engineering firm for the Nebraska Department of Roads project. A solution was sorely needed to solve the city’s traffic congestion problems on its main thoroughfare in an area experiencing accelerated growth.

The team took to the sky for the answer, and two-mile long viaducts carrying six lanes of traffic were built 45 feet above West Dodge Road between the Interstate 680 interchange and 124th Street. Despite an aggressive schedule, the project was completed more than a year ahead of schedule, partly due to OPPD’s involvement. It’s been 10 years since its completion, and in 2016 alone, and more than 33 million cars travel over the expressway annually, according to Nebraska Department of Transportation traffic statistics.

In 2004, Steve Fanslau, then OPPD’s lead utility coordinator, said that involving utilities in the design stage was the ideal way to make a project go more smoothly and economically. For instance, an OPPD suggestion that a sidewalk be moved two feet to the north avoided the costly relocation of an electrical switch. And, on two occasions, OPPD installed temporary overhead power lines to keep the contractors working on schedule.

Eight-eight piers had to be installed to support the 40-foot high, two-mile-long expressway. All electrical distribution lines and equipment had to be relocated underground around the piers, which are anchored 70 feet underground.

The scope of the project was large — 2,300 feet of duct and power lines had to be relocated along the south frontage road, east of 114th Street. Utility lines had to be removed, and electricity rerouted. Crews also installed temporary streetlight service for use until the site was ready for permanent service.

To ensure that the year-long utility work was on target, the OPPD team met weekly with personnel from Hawkins Construction, the contractor for the project. Also, OPPD utility coordinators spent a lot of time on site.

“It’s important for utility coordinators to get to know all the contractors, government agency personnel, surveyors, construction people, designers and other utility people,” Fanslau said in an article in a 2004 issue of OPPD’s Ideas magazine.

“Then, if there is a problem, you can communicate with the people with whom you have built relationships to help them understand the situation and get it corrected quickly.”

During the first phase of the project, OPPD built new duct lines and installed underground lines for all the commercial customers along the route.

OPPD crews worked at night to accomplish this so businesses wouldn’t be without electricity in the daytime, Fanslau added. “OPPD electric service designers worked with small business customers to schedule the cutovers so the outages would not interrupt business services.”

For example, Jerico’s restaurant on the West Dodge access road was due to have the electricity cutover late on a Thursday night. The following day, the eatery was having a large private brunch with $20,000 worth of lobster and steak on ice.

“Jerico’s chef was concerned about spoilage,” Fanslau said in the 2004 article. “But when we heard about the brunch, we scheduled it so the outage was minimal. However, a cable was cut by another company the morning after the switchover. Due to good communications between all parties, an OPPD troubleshooter had the unexpected outage fixed within an hour, and everyone was happy, except the lobsters.”